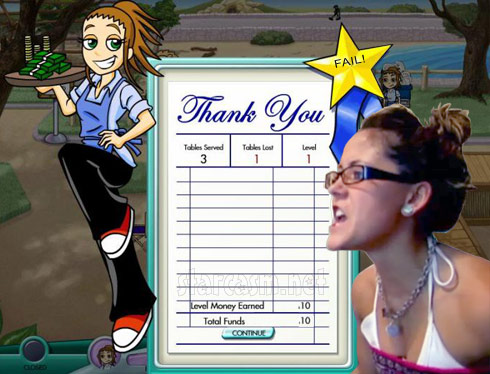 Teen Mom 2 star Jenelle Evans has seemingly gone a looooooong way toward turning her life around as the former tabloid headline staple has managed to stay out of major trouble for almost a year now — basically ever since getting pregnant with her second son, Kaiser. Although this drama drought continues, we do have a sprinkling of controversy courtesy of Jenelle’s recent bad experience at a restaurant and a waitress none too happy with getting stiffed on a tip.

The incident went down Saturday night as Jenelle celebrated Nathan’s birthday at an unnamed restaurant with some of Nathan’s family, including his mother and brother. Apparently Nathan’s mother Doris made a reservation ahead of time and even ordered a cake, but service was still VERY slow (as in hours slow) and Nathan didn’t get his cake to boot. Doris, who paid for dinner, was so angered that she left a ten cent tip and an angry hand-written note on the back of the receipt.

The next day, the group’s waitress posted an angry message on Jenelle’s Facebook fan page explaining that it wasn’t her fault that the kitchen didn’t receive their food ticket or that they did not get the cake they pre-ordered.

Jenelle responded, and the result is our little sprinkling of drama! Here is the whole thing:

Just wanted to say thank you to you and Nathan’s family for stiffing me for no reason last night at dinner. Yes I was your server. You yourself were actually very nice the whole time, everyone else was very rude but just wanted to say that the kitchen not receiving your ticket for your food was not my fault. Also not my fault you guys were thinking our restaurant baked a cake for Nathan’s birthday. Sorry that i gave “very poor service” as you guys wrote on the back of the check. The funny thing is drinks were full the entire time. Just wanted to also tell you thank you for me actually losing money for you guys to eat. I had to pay for you guys. But the ten cent tip was very nice. Wish I could post the picture to this page. And to think I actually thought we were a nice person and I was very surprised. Thought that one too soon

Jenelle, I want people to know YOU didn’t write on back of our receipt, it was me!!! You can ask any waitress in the area that Frank and I give more than generous tips. Actually always over 20%. However, due to us arriving timely for our reservations, and we called in a cake request prior to arrival, I expected to have a great birthday for my son. 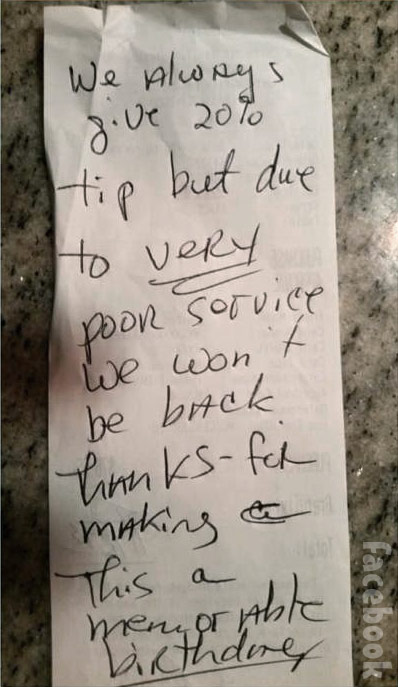 We were two hours being served. I had requested that Zach’s salad come out first since he had to be at work. Four tables with four or more guests were served prior to our table when we were the first ones there. Zach had to leave hungry for work since he never got his salad and we were there for Nate’s birthday and he NEVER got his cake, and there were numerous ones served around us. When he asked, “why didn’t you guys order me a cake” and we had, it broke my heart.

So, I had one son leave hungry and the other not get his cake, I was one unhappy mamma!!! If this would have been the first time this had happened I could have gotten over it easier, but the first time Frank and I went to this restaurant it was a total of three hours before we ate and we were there from 8:00 to 11:00pm. Very, very unhappy camper and there will not be a third time! We spend approximately 2 to 3 hundred dollars at nice restaurants and ALWAYS leave good tips. They put me over the edge!!!

Let’s call this ignorant little girl out… She wants to get all butt hurt cuz I didn’t tip her?! She claims I was very nice but at the end of the paragraph claims we r mean people? Righhhhht… Anyways…

Well.. First of all I dine at the restaurant she works at all the time and it’s always awesome service.

The weekend of Nathan’s birthday the service wasn’t so great. Ontop of forgetting to put in our order she lied to Nathan’s face and we got our food 2 hours later and other issues occurred. Arrived at 6pm and didn’t get our food until 8pm!

And another thing… I didn’t pay for the meal so I was [not] obligated to tip ANYONE. That was his mothers choice not to tip her and this is why… [Jenelle included Nathan’s mom’s message as well as a the photo of the back of the receipt]

P.S. I will not name the restaurant she works at becuz I will be calling them myself to let the manager kno she’s exploiting my future family and slandering them online.

So what do you think? Should Nathan’s mom have left a tip regardless?

PHOTOS Kail Lowry gets rid of dreadlocks, appropriates 1980s culture in the process