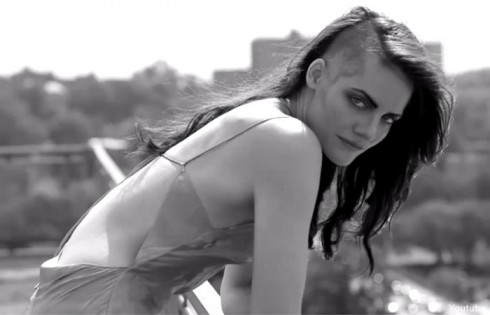 It seems like forever ago that we first met Katie Stoltzfus as she and her Breaking Amish cast mates walked around New York City wide-eyed and decked in Amish attire, marveling at all the visual wonders The Big Apple had to offer. Now Katie, aka Kate Stoltz, is one of those visual wonders The Big Apple has to offer as she continues to build on her successful professional modeling career that she started while being filmed for the first season of Breaking Amish.

As any professional model knows, versatility in your look is a very important thing when trying to land jobs, and Kate can now put her bonnet in the ring for “edgy” shoots after shaving the right side of her head! Here’s a recent Facebook post from Kate with a punktastic black-and-white subway shot along with some of her insightful reflections:

Kate also shared a behind-the-scenes video from a recent shoot she did with Dorian Clive in which you can see her new look in action:

“Had so much fun shooting a quick behind the scenes video of a recent photo shoot,” Kate wrote along with a link to the video. “What do you think about the new hair?” she asked before adding, “Share the vid if you could see me working in music videos for artists in the future.”

But more traditional fans need not worry because, as Kate explains, “I was scared when I shaved it, but I can always flip it over when I don’t want to wear it that way 🙂 ” Illustrating her point, Kate shared this post-haircut photo from the recent NFL Hall of Fashion event showing off her comb-over skills:

See? There’s that much-coveted versatility I was talking about!

One fan asked Kate if she planned on following up the edgy ‘do with some edgy ink in the form of a tattoo. “I would love to add a tattoo, but am not quite ready to cross that bridge yet,” Kate said. “It would have to be something that would mean a lot to me!”

So what has Kate Stoltz been up to lately, besides dulling electric shaver blades? Oh not too much, just kicking more ass in the modeling world! Here’s a photo of Kate (after “The Shave”) with some other models at the A.Z Araujo show in New York City during Mercedes Benz Fashion Week: 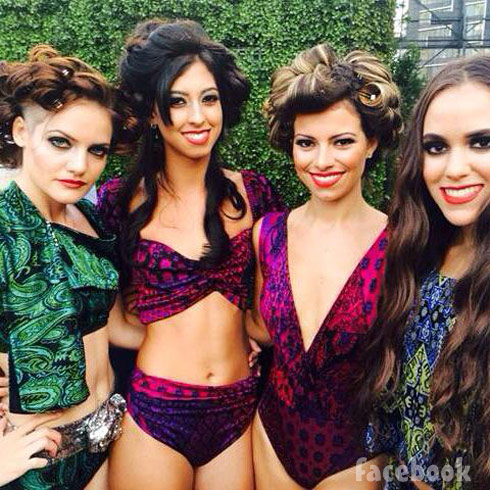 Kate was also one of the models in Victor De Souza’s controversial MBFW show in which the models arrived to Central Park on horse-drawn carriages right in the middle of numerous protests about the treatment of those horses. Here’s a video segment from My Fox NY in which they actually interview Kate, and with her Amish background, she actually has some input on how the horses were being treated!

And she was featured in the Fashion 4 Development show: 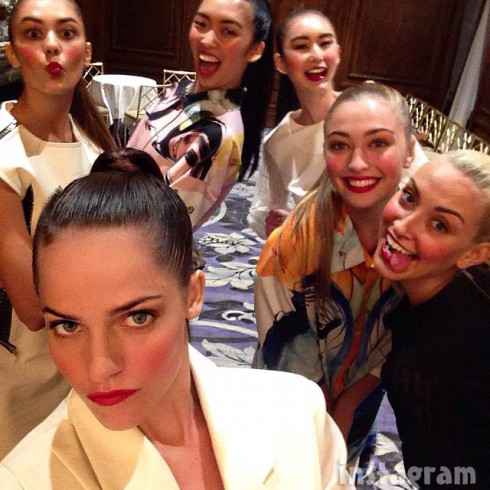 In addition to the Fashion Week work, Kate also continues her “usual” modeling work, including landing a prestigious video shoot with Coach along with models Yulia Rose and Isabella Öberg! Here is a photo Kate shared from that shoot on instagram captioned, “With @Isabellaperssonoberg hanging out during our Coach shoot”

If all that doesn’t give you a good picture of just how crazy busy Kate’s life is, I think this next instagram photo (which includes Kate’s pooch Victoria) sums it up pretty well. Kate posted it along with the caption, “#funny pic caught in Soho by a street #photographer. Haha #TMZ is in the background trying to get an interview… #victoria is like, WHATTT, I’m just chilling”

Congratulations again to Kate! We will continue to keep you updated and will try to be the first to let you know when she lands the cover of the Sports Illustrated Swimsuit issue! 😉