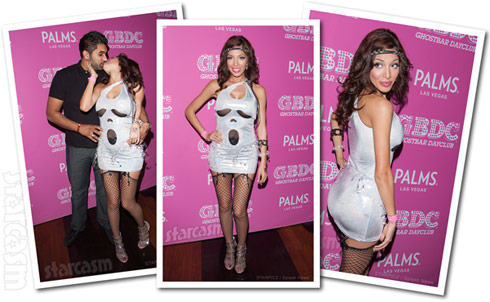 Former Teen Mom Farrah Abraham is off to quite a start in 2015! After revealing on New Year’s Day that she is dating a mystery man (later identified as San Diego real estate big shot Simon Saran), Farrah made headlines and tabloid covers with a botched lip implant procedure that left her looking like a living Matt Groening cartoon. That was followed by appearances in New York City last weekend and then this week she was in Las Vegas for the AVN (Adult Video News) Awards where she launched the Farrah Abraham blow-up sex doll and hosted several parties, including the Toga Party at the Ghostbar Dayclub at the Palms Casino! 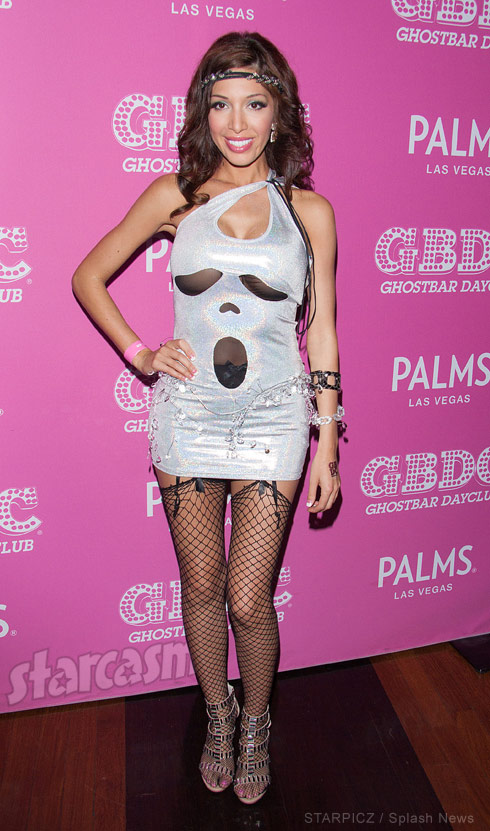 It seems Farrah was more inspired by the Ghostbar name than the toga theme as she arrived on the red carpet wearing a Ghostface Scream dress! And now I am going to take the high road and share a photo of Farrah Abraham’s Farrahdonkadonk without making a backdoor joke: 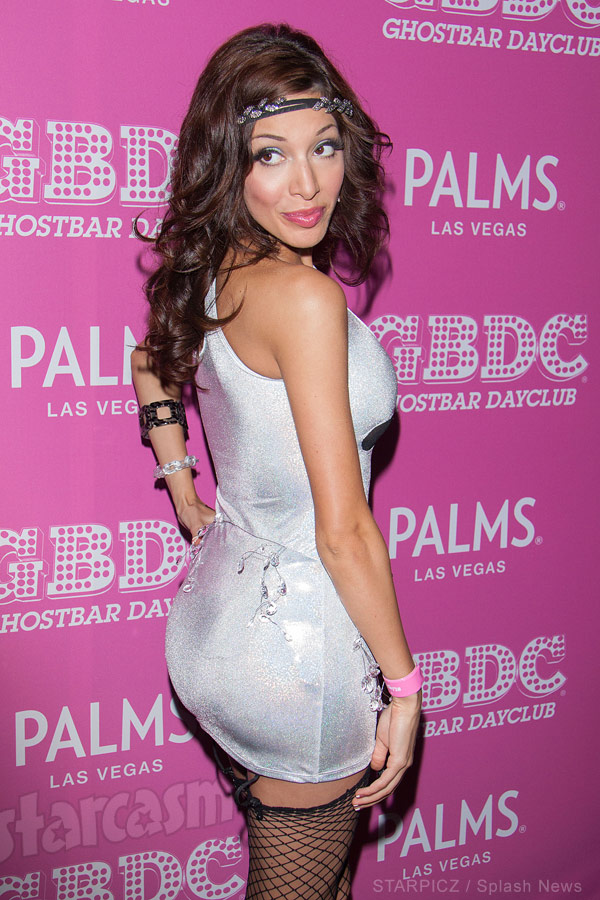 One person that wasn’t frightened off by Scare-ah Abraham was her new boyfriend, Simon Saran, who got some serious Ghostfacetime with Farrah as the two made their version of a PG-rated sex tape for the photographers: 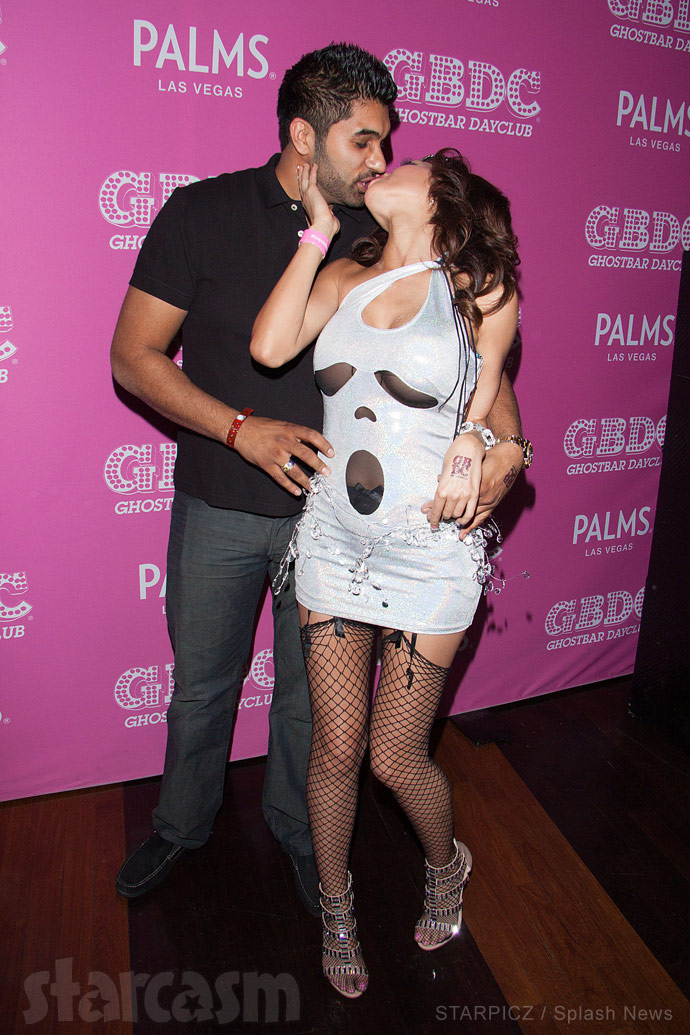 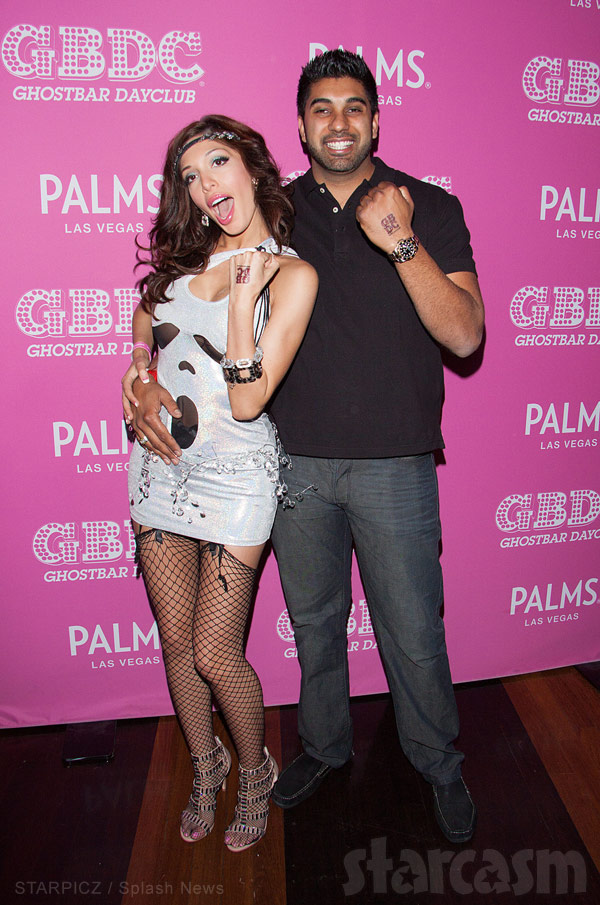 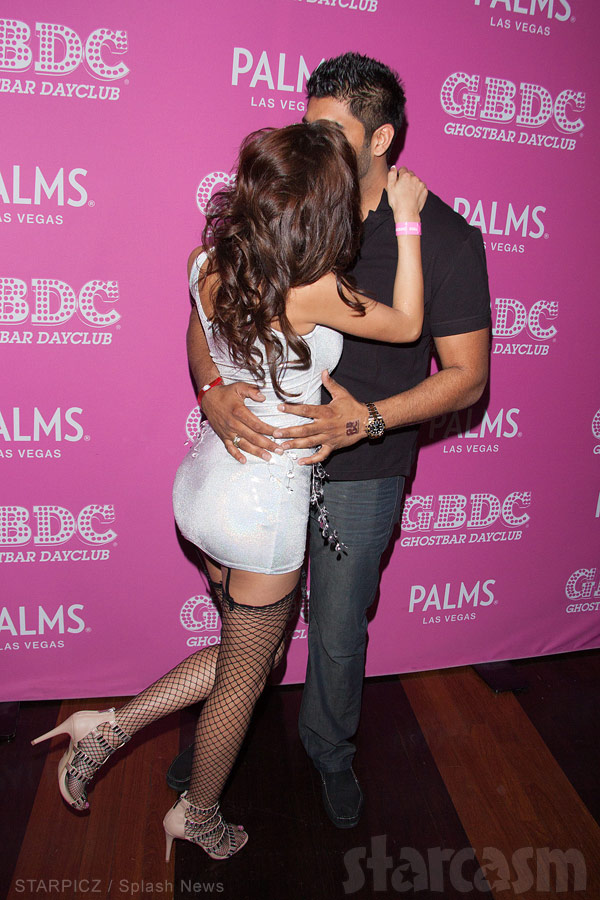 (Hmmm… It appears that Simon’s ring — that caused such an uproar in the couple’s New Year’s Eve photos — is now on his right hand.)

After posing for photographers, Farrah and Simon (aka Farsi) went inside and earned that dollar by being gracious good-timin’ hosts. The Ghostbar shared some pictures from the shindig on Twitter:

Sitting on top of the world with bombshell @F1abraham! #gbdc pic.twitter.com/6ip7Z4NcVd

And check out this Farrahmazing picture in which appears that she had togs-clad women spelling out her name in large letters as she danced around holding an over-sized Farrah Abraham lollipop!

I kinda want one of those Farrah Abraham lollipops! Unless it’s a sex toy, then I think I’ll pass. 😉 (Would that be called a jollypop? Or maybe an all-day *ucker? Just use an “s” if you’re easily offended.)

And just in case you aren’t fond of Farrah meet and greets, then how about a little fondue Farrah meat that’s great? (Yeah, that was quite the stretch, but the I think the photos redeem it.)

On Thursday evening @F1abraham dined with us alongside friends. pic.twitter.com/YTAaKO3WTU

I would challenge everyone to “caption this” on those photos, but I’m afraid 95% of the suggestions would get flagged for inappropriate content. ***SIGH***

UPDATE – The party continues! Check out this photo of Farrah the superhost as she gives a reason for this seasoned blogger to write the word “flabongo” for the first time ever: