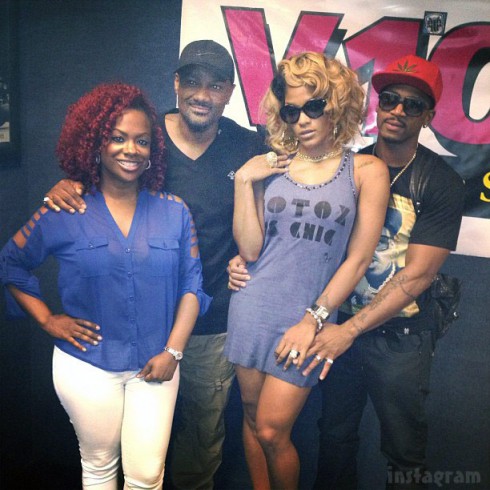 It’s been rumored for weeks that Love & Hip Hop Atlanta co-stars Stevie J and Joseline Hernandez are married, and earlier today The Real Housewives of Atlanta star Kandi Burruss added fuel to the rumor fire by posting numerous photos of the couple looking to be wearing matching wedding rings!

Kandi posted the photo above on her Facebook fan page along with this lengthy description:

This morning at V103 Joseline was dancing in the studio. Joseline and Stevie J. have matching rings. Hmmm. I had a blast with all of them co-hosting the morning show!

Kandi’s “Hmmm.” gets a big HMMMMMMM from me!

That photo was preceded by these next two, the first of which Kandi captioned with “Are they married???? Look at @thebaddestputa1’s rock.” 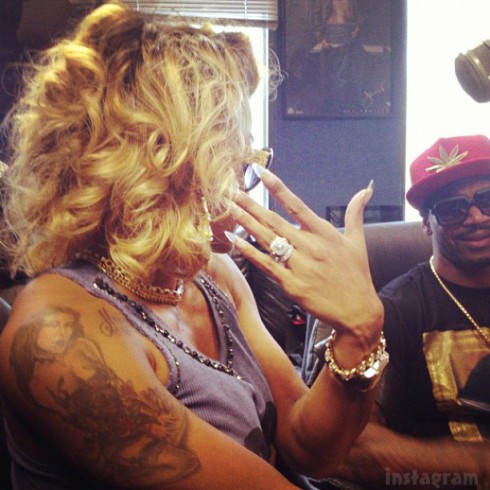 She then shared this close-up photo of Joseline and Stevie J’s ring bling with the words, “They’re both rocking rings on the wedding finger!” 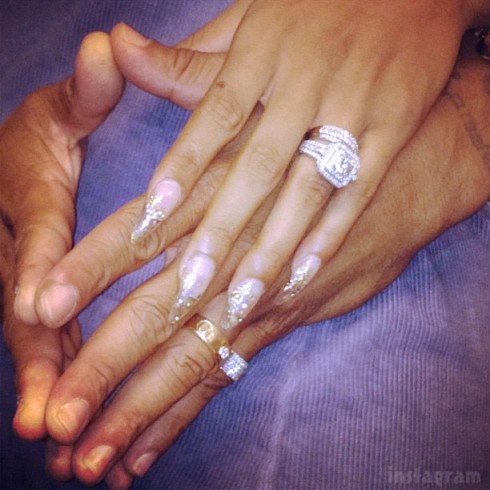 It appears that the sometimes unreliable MediaTakeout.com may have been accurate with its story back on June 13 reporting that Joseline and Stevie J got married in Puerto Rico in the first week of June. A “friend of the family” told the site that Stevie J flew Joseline and her entire family to Puerto Rico for the ceremony, which was captured by VH1 cameras for L&HHA. Actually, the site reports that producers of the show were a bit heavy-handed in their filming, going so far as to have “the minister STOP THE VOWS, so that they could shoot a better angle of Joseline.”

The timeline seems to jibe with this photo Stevie J posted on June 12th clearly showing his wedding ring (some commenters have wondered if its actually a guy’s engagement ring) along with the caption, “Just another day at the office #blessed” 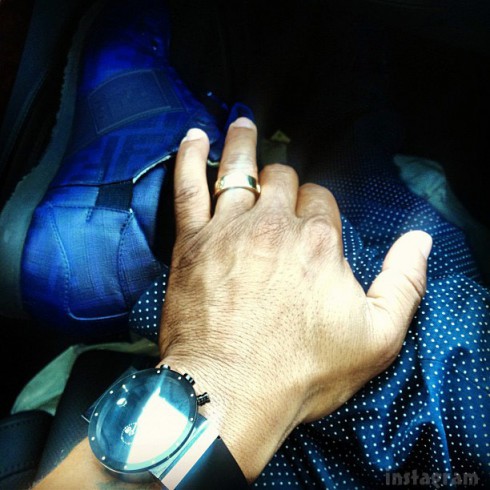 Stevie J’s longtime companion (and mother of his 3-year-old daughter Eva) Mimi Faust was asked about the Media Takeout report in an interview with MStarz and she revealed that all that she had heard at the time was “The same thing you heard. It’s a rumor.”

Mimi was then asked if she would want her daughter around Joseline if it turned out she was in fact her stepmother now, to which Mimi responded by asking, “If you had a 3 year old, would you have your daughter near her? She is the same way off camera as she is on camera. Would you have your 3 year old around her?”

And then there was this question and response:

MStarsNews: Would you take legal action so she stays away from your daughter?

Mimi Faust: Even if I took legal action I still don’t know what happens when I drop my daughter off at Stevie’s house. I can do legal action all day long, that’s still not going to prevent that woman from going over there if my daughter’s there. It’s just not. I just got to be real with myself. Do I want her around my daughter? Absolutely not. Does it happen? I’m pretty sure it does because he’s a liar. He’ll tell me all day long ‘Oh no!” When I leave and drop her [Eva] off I don’t know what goes on after that.

I should also point out that the photo with Kandi Burruss added fuel to another rumor circulating online that Joseline and Stevie J are joining The Real Housewives of Atlanta! Though we have no definitive answers on either of the rumors, we do know one thing: Stevie J and Joseline are absolute professionals at the media game! (Speaking of that, be sure to check out Joseline’s brand new music video for “Mi Colta,” just released today.)

Insider on Catelynn Lowell and Tyler Baltierra’s wedding: ‘It was a giant love fest’