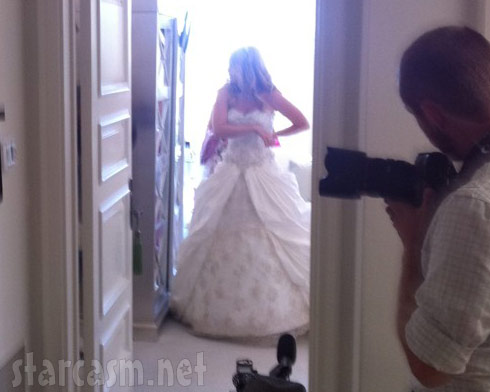 This year has seen a couple huge wedding ceremony extravaganzas in the form of the royal union between Prince William and Kate Middleton and the American royal wedding between Kim Kardashian and some tall guy. Yesterday the world was treated to the best of both British aristocracy and American reality royalty as The Real Housewives of Beverly Hills star Lisa Vanderpump (My true Queen of England) and husband King Ken Todd gave away their daughter Pandora Vanderpump-Todd in an elaborate pink-themed ceremony on the grounds of the Vanderpump’s Beverly Hills estate.

UPDATE – CLICK HERE to see a photo of the bride and groom tweeted by Lisa on Monday. Also, Jenni Pulos shared a photo of her and Lisa together at the event with Lisa seriously decked out in pink and bling! 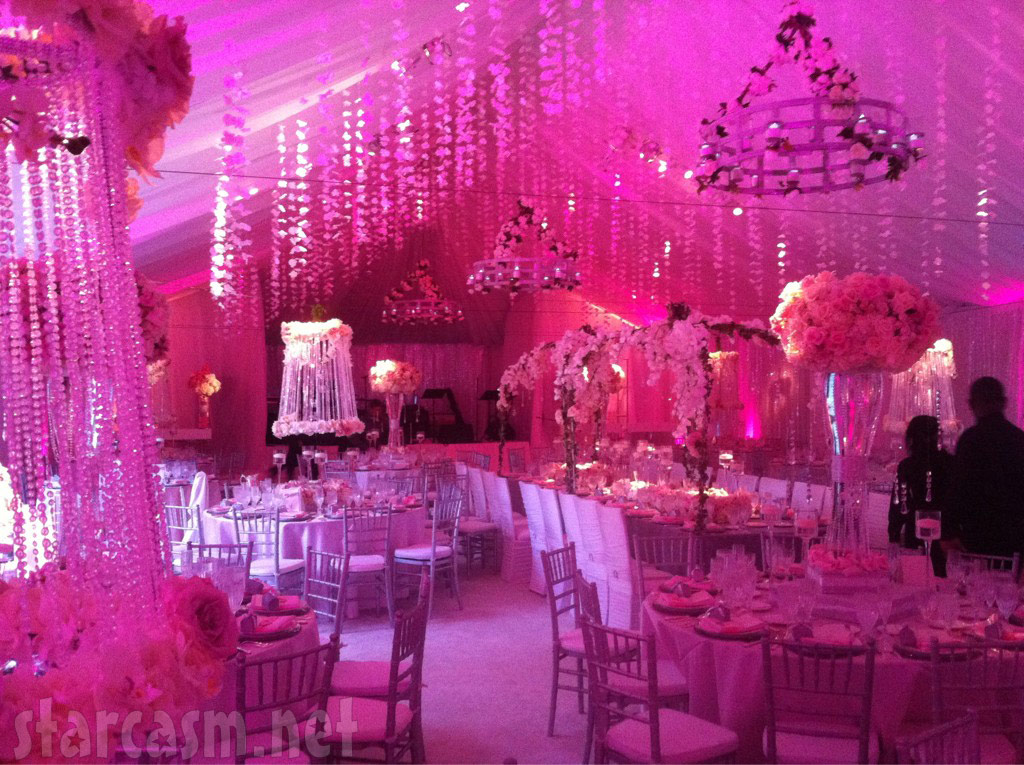 Lisa gushed about the event and the good will of those in attendance via Twitter by writing, “I can’t explain the love and warmth that filled the room and our hearts last night,thank you all for your messages,my daughter is married!”

There have been no official photos or videos from the wedding as of yet, although it has been rumored that Bravo cameras would be rolling with plans to include footage in the upcoming second season of RHoBH. I was able to cobble together a number of photos from those in attendance – most of which were shared via Twitter with nothing but excessive praise about the ceremony and kind words of appreciation to Lisa and Todd.

The best batch of photos were shared by triplet stylists Kelsey, Korrie, and Kaeli of 3 Loves Beauty, who handled all of the makeup and hair for the ceremony. Here is the only photo I could find of Pandora Vanderpump herself wearing her AMAZING wedding dress – you can see what I assume is the Bravo production crew hard at work. 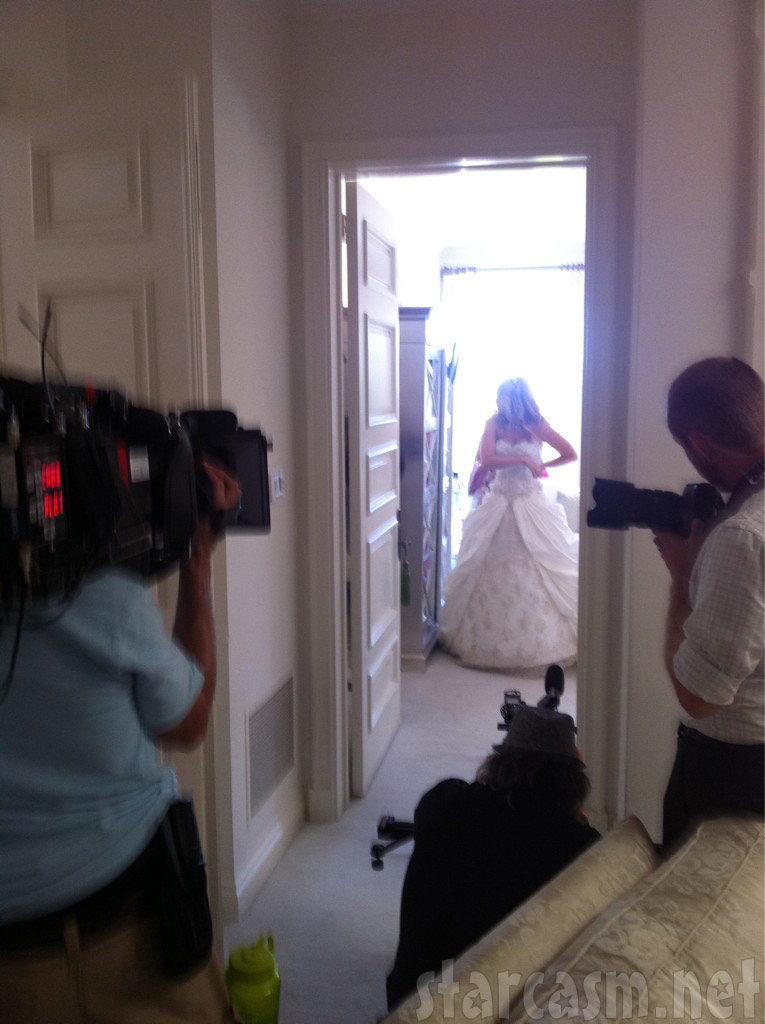 By the way, why in the world isn’t Bravo doing a reality show called 3 Loves Beauty?!? Really attractive triplets running a beauty business reputable enough for Lisa Vanderpump to hire them for her daughter’s wedding?!? I am a huge fan of the show already, and it doesn’t even exist!

More photos from the Three Glamigos in a moment. For now, let’s take a look at some of Lisa’s Real Housewives of Beverly Hills cast mates who were in attendance! 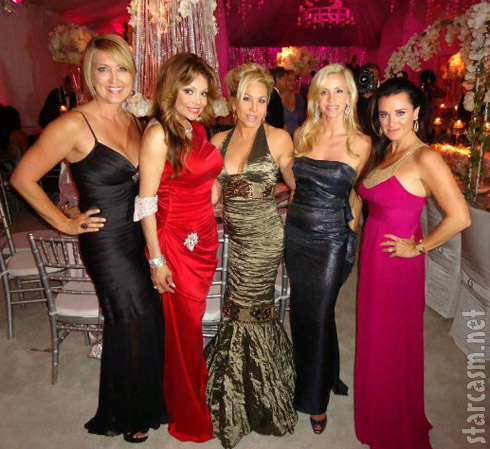 From left to right we have Wendy Burch (from Wake up with Wendy on KTLA), LaToya Jackson, Adrienne Maloof, Camille Grammer, and Kyle Richards.

It’s nice to see Kyle and Camille making nice and (hopefully) not stirring up drama at Pandora’s wedding! (It’s also nice to see Kyle’s upper body assets making nice!) Check out the variety of attire between Adrienne, Camille and Kyle – Adrienne’s got that wonderfully tight but crumpled full-length gown, Camille went with a super-sexy but completely appropriate and elegant strapless black dress, and Kyle brought the color pop with her soft and flowing hot pink dress with an elaborate metallic top. (Ooooooooh how I love these ladies! Hurry up season 2!)

And don’t think for a second that the superstar of the family wasn’t in attendance! Here’s Giggy with the father of the bride Ken Todd and another mighty handsome man that I don’t know the identity of: 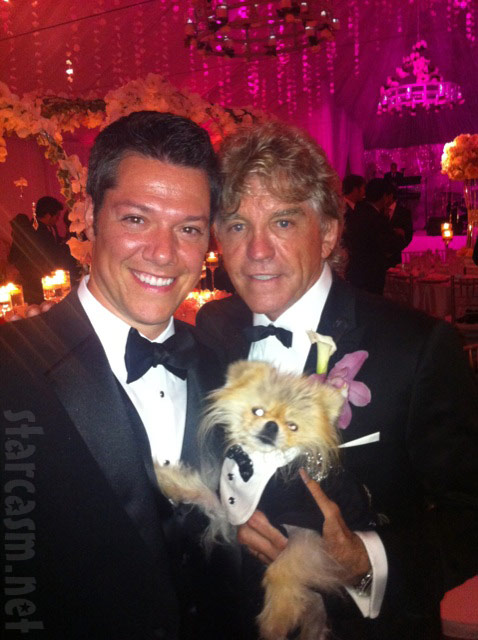 Giggy was sporting a tux and according to his Twitter account, “I arrived on a pillow …covered with roses,just before the bride….in my tux…tum ti tum tum…woofeee.”

Here’s another photo of the ladies above sans Wendy Burch. (Unfortunately for LaToya the lights are playing tricks with her face.) 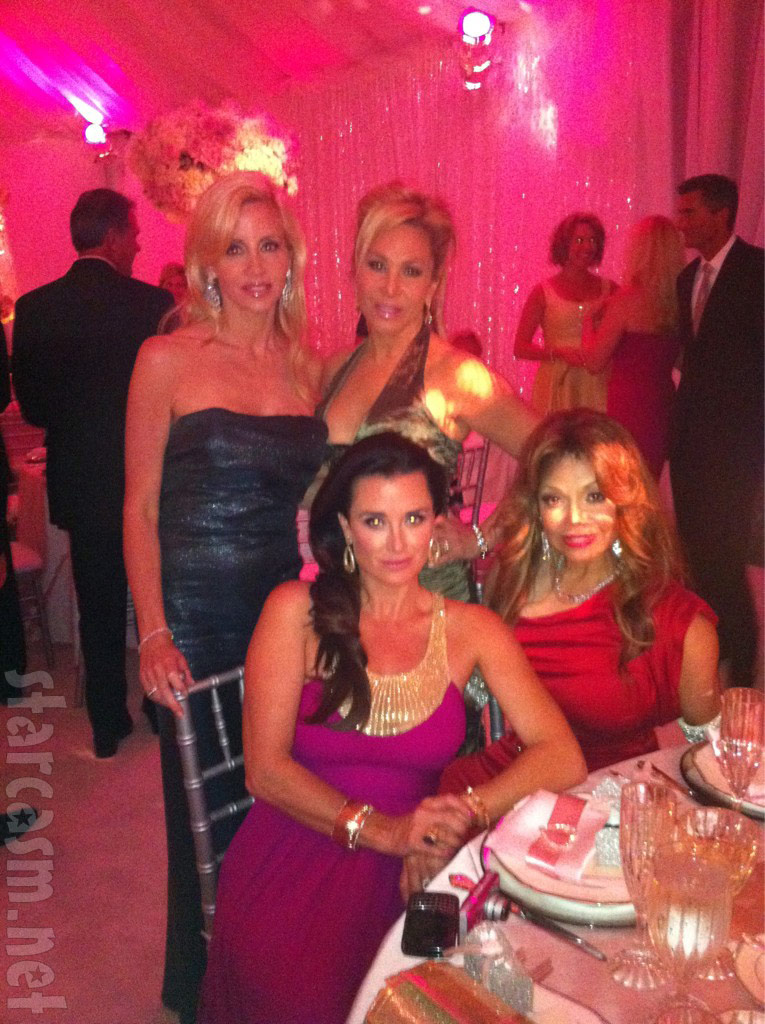 And here are a couple final shots of the preparation by my new favorite triplets in all the world, 3 Loves Beauty. In the first one you can see Pandora Vanderpump-Todd’s breath-taking wedding dress hanging behind Lisa! (Click to zoom in) 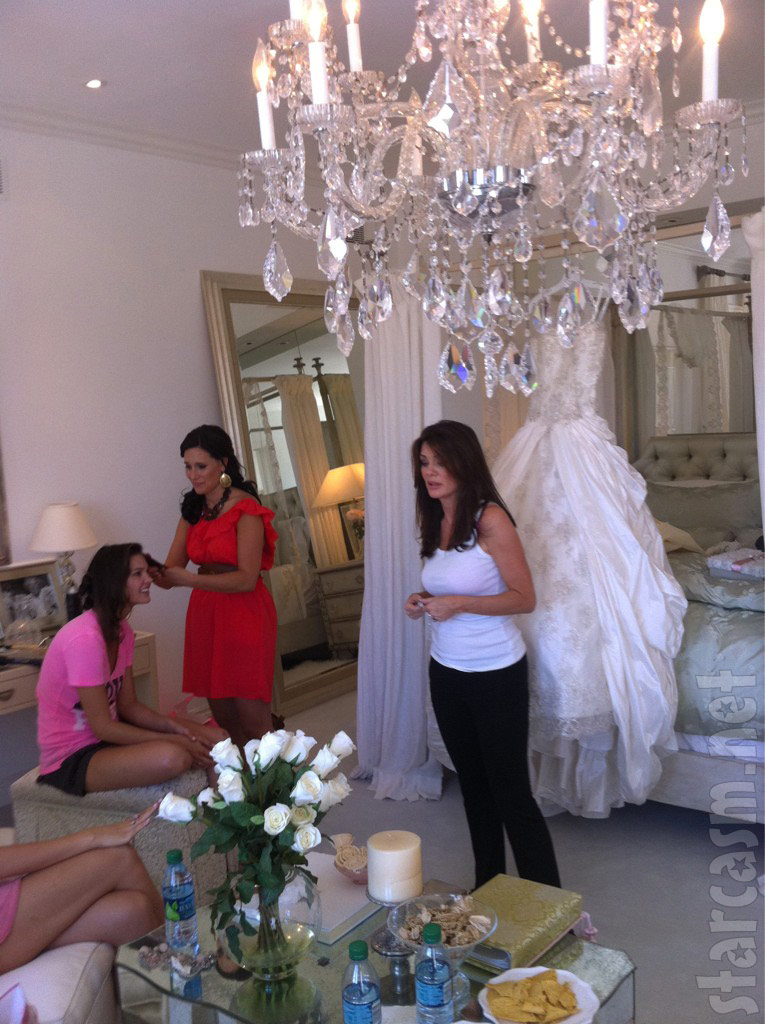 And I believe that is Pandora herself with the blond curls in this next photo: 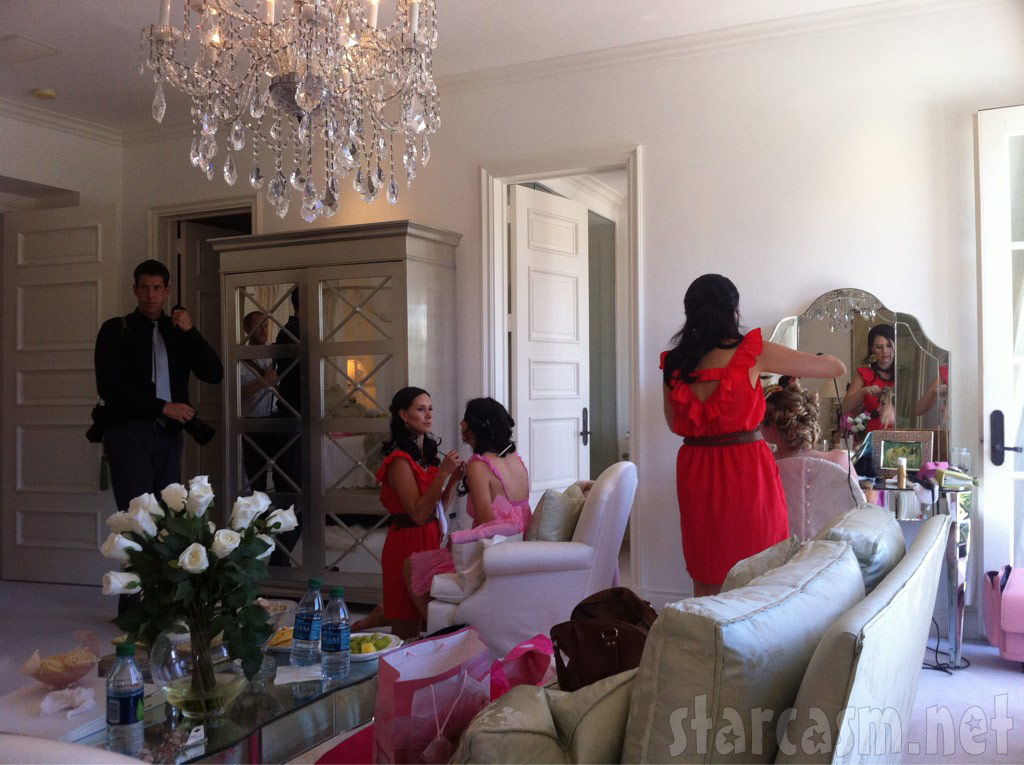 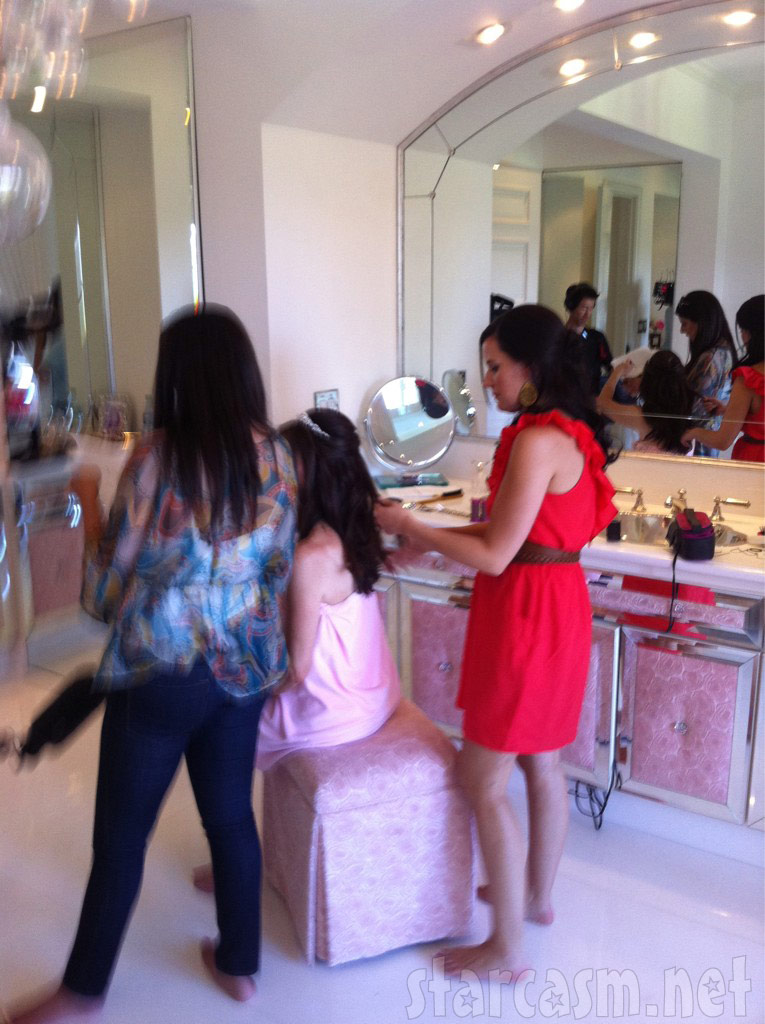 Man o man – what I wouldn’t have given for a ticket to this shindig!

UPDATE – Radar Online is now reporting that Bravo cameras were, in fact, not present during the ceremony. Perhaps they were only taping before and after? (That just has to be Bravo cameras in the photo above!) Radar also reports that Taylor Armstrong was not in attendance as she continues to grieve the suicide of her estranged husband Russell Armstrong August 15.