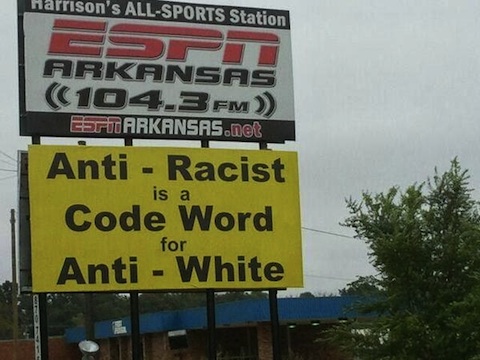 The northern Arkansas hamlet of Harrison, population 12,943, has a reputation that far surpasses its physical size.

Unfortunately, a lot of that reputation came when the above billboard was erected on a prominent local thoroughfare.

The sign–which has been up since October of 2013–is the most recent racially-charged incident for a town with an unusually troubled racial history.

Thomas Robb, the national director of the Ku Klux Klan, lives in the nearby town of Zinc, but headquarters the Klan in Harrison.

In addition to that: according to the Southern Poverty Law Center, tiny Harrison contains seven organized hate groups, or one for every 1,857 people. (That, in case you were wondering, is a high ratio.)

Part of the problem is Harrison’s past. In 1905, and again in 1909, the city ran out black former railroad workers who were unemployed at the time.

And, today, there are but 34 African-Americans in the town, according to the most recent census.

Indeed, a recent report by Al-Jazeera referenced the “most racist town in America” moniker, pointing out, among other things, the hypocrisy inherent in Robb’s attempts at portraying the Klan as more “gentle, upbeat, and friendly.”

(Robb is, after all, an ordained pastor. Though his is a bit more Westboro-style than, say, James Brown in The Blues Brothers.)

The town is trying to change things, though. The office of the mayor of Harrison, in response to the sign, had the following to say:

While the clients that are responsible for the sign are exercising their freedom of speech, the mayor’s office considers the content inflammatory, distasteful and not in line with the truth on how Harrison is a city of welcoming and tolerant citizens. The owners of the signage, who I am unaware of, and the owners of the structure, which I understand is the Harrison Sign Co., should be ashamed to display such antiquated ideology and hatred that adversely affects Harrison as a whole.

And, recently, the Harrison Community Task Force on Public Relations ran a competing billboard, one adorned with the following quote from Martin Luther King, Jr.: “Hate cannot drive out hate; only love can do that.”

What do you think? Is the billboard a racist blight on a small town? Is it really that bad? Are there different ways of looking at this issue?

UPDATE Georgia principal apologizes for racist remarks, blames them on “the devil”