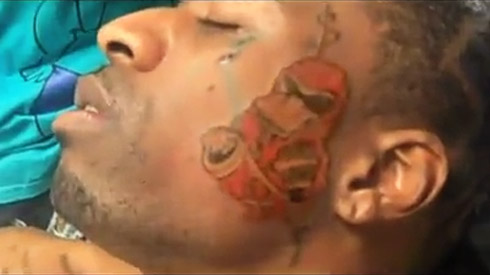 Not one to be bested by the ice cream coned visage of fellow rapper Gucci Mane, Yung L.A. took to the chair to have a huge angry pink dunk permanently tattooed on the left side of his face. And not one to miss out on a marketing opportunity Yung LA videotaped a large part of the process to share with his fans and promote his new mix tape titled Tattoos and Jewelry due out March 15.

Oh, and he is no longer with Grand Hustle! (There are actually 12,000 bits of information in the clip thanks to a 90 mph Yung LA.)

Here’s the full video courtesy of WorldStarHipHop.com, but be warned that there is a good deal of foul language as well as multiple references to the purple sizzurple Yung LA is using as fuel for his spirited performance throughout the process:

I’m sure the tattoo world has some sort of globally recognized awards ceremony and I would like to officially nominate the artist from this video for the Steady Hand Award! He somehow manages to tattoo a cartoon duck that looks just like the illustration on the laptop screen with Yung LA never managing to stay still for more than five seconds at a time!

And just to be thorough, here is a screen cap of the laptop monitor that has the original duck art the tattoo artist is working from: 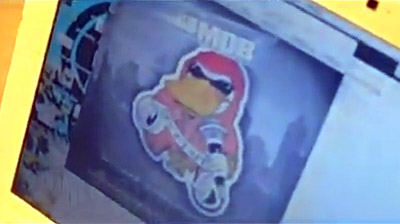 UPDATE – After doing a bit more research (These ridiculous facial tattoos deserve no less!) I discovered that the art on the laptop is from the Duct Tape Entertainment mix tape release The Mob and the pink-cloaked duck is actually DTE’s logo. So, it could be assumed that after leaving T.I.’s Grand Hustle label Yung L.A. has signed with Duct Tape Entertainment. If not, then the foul facial fowl is even more ridiculous! Here’s the cover from The Mob: 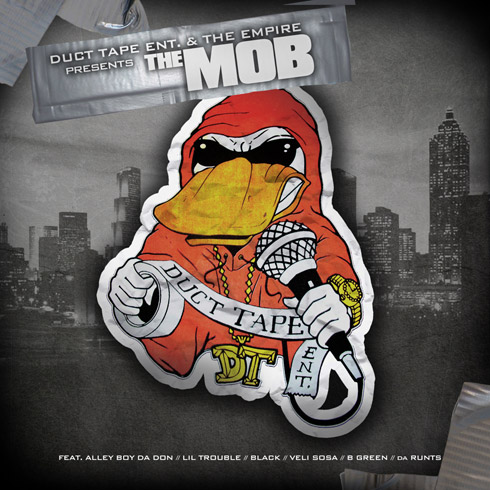