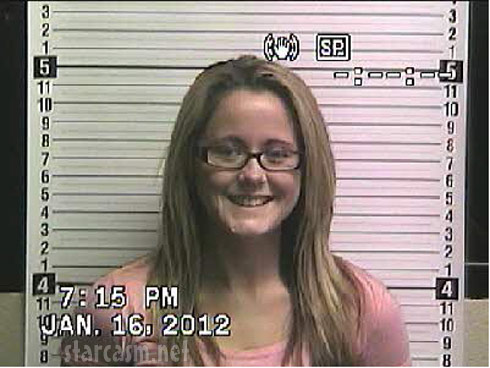 Teen Mom 2 star Jenelle Evans is behind bars again, this time for violating a domestic violence protective order according to a news release from the Brunswick County Sheriff’s Department. The arrest occurred Monday night at around 7:15 and she will be spending the night in jail.

UPDATE – We spoke to Jenelle’s manager, Leo Daniels (Facebook, Twitter), who tells us it was Hannah Inman who claims Jenelle broke a protective order by attempting to harass her via phone, internet or other means. He also tells us that because it is a “BOGUS repeat” offense they have to keep Jenelle overnight.

UPDATE – We just spoke with Jenelle’s attorney, Dustin Sullivan, who summed up what has happened so far this way: “Jenelle was charged with Domestic Violence Protection Order Violation last night. She spent the night in jail and we had a first appearance in court this morning. Her bond was set at $1000.00 secured. Her next court date is set for February 6, 2012. She is facing 75 days of active jail.” Dustin also spoke with TMZ and told them Hannah alleges Jenelle sent her a text. And according to the warrant for Jenelle’s arrest, Hannah has also accused Jenelle of posting links to a nude photo of Hannah on her own fan site. (TMZ also has exclusive photos of Jenelle arriving for court this morning.)

Less than a week ago (January 10, 2012,) Jenelle was arrested for “harrassing phone calls” and “threatening the life” of Hannah Inman. Jenelle was released within hours that day, and her lawyer called the charges against her retaliatory because she filed cyber stalking charges against former boss James Duffy (with whom Hannah Inman is reportedly living.) We weren’t able to confirm when Jenelle’s charges against James Duffy were filed, but we were able to report January 12, 2012, that charges were filed at some point. Click here to read all of our coverage of the drama between Jenelle, Hannah, and James Duffy.

NOTE: The above mug shot is from Brunswick County. It was taken January 16, 2012. It looks very similar to Jenelle’s mug shot taken last week, but in this one she is wearing a different pink sweater, is wearing glasses, her hair is parted differently, and her face is less puffy because she was sick with strep throat last week.

Here is the definition of a domestic violence protective order as it pertains to the state of North Carolina from Womenslaw.org:

A domestic violence protective order (DVPO) is also called a restraining order, or a 50B. It is a paper which is signed by a judge and tells your abuser to stop the abuse or face serious legal consequences. It offers civil legal protection from domestic violence to both women and men victims.

What types of protective orders are there? How long do they last?

In NC, there are two types of domestic violence protective orders:

An ex parte/temporary protective order is a court order designed to provide you and your family members with immediate protection from your abuser. A judge may issue an ex parte order on the same day you file your complaint for a domestic violence protective order if s/he believes that there is a serious and immediate danger to you or your child. If the judge does not issue the ex parte order on the same day, the court must hear the request for an ex parte order within 72 hours or by the end of the next day on which the court is in session in the county of the filing, whichever occurs first. An ex parte/temporary protective order is usually issued without your abuser present (“ex parte”).

In order to get a final domestic violence protective order, you need to have a full court hearing. Your abuser has to be served with notice of the hearing so he has an opportunity to attend. An ex parte/temporary protective order will protect you from the time the ex parte order is entered until your full court hearing takes place, usually within 10 days. However, the ex parte order will not be able to be enforced until the defendant is served with a copy of the order.

A final domestic violence protective order lasts up to one year. You can ask the court to extend the order for an additional two years (with the exception of the custody provisions), but you must do so before it expires.* (See How do I modify or extend my order?)

NOTE – stalking/harassment: If you have not had a “personal relationship” with your abuser, harasser or stalker, you may be eligible for a protective order against stalking or sexual harassment.**

UPDATE: Jenelle was released from jail Tuesday, January 17, 2012 on $1,000 bond. According to TMZ (who also has pictures of Jenelle shackled and wearing prison stripes) she was upset, and has a court date set for February 6, 2012.