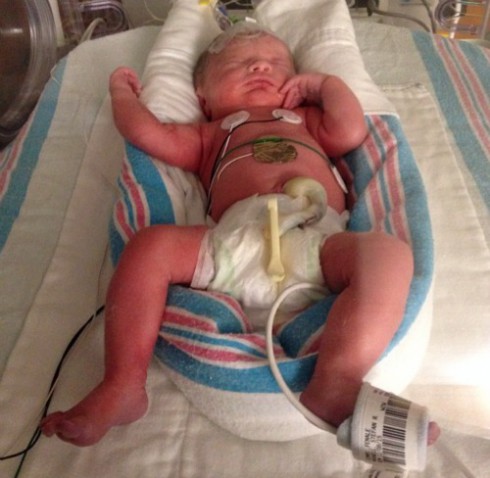 Jeff Simms shared the news on Facebook and Instagram. On Instagram, he shared the following caption for the above picture, “Remington Monroe surprised us this weekend with her early arrival. She and her mommy are doing well. I am hopelessly in love!”

The Ashley also shared a sweet picture of Corey and Miranda adoring their baby, which the couple posted on its private Facebook page. The Ashley reports Remi, as the family has decided to call her, weighed 4 lb. and 11 oz. It’s unclear how the couple chose “Remington” as a first name, but “Monroe” is Miranda’s father’s middle name.

Remi was due on January 1. Corey and Miranda announced they were expecting in May. They celebrated the baby’s (super) impending arrival with a baby shower in October, at which point they revealed the baby’s name.

Besides Remi’s birth, this is a busy time for the family: Leah Messer recently confirmed that a judge granted primary custody of her and Corey’s twin daughters to him, which means he cares for the girls throughout the week. That conflict will reportedly play out on the upcoming season of Teen Mom 2.

Congratulations to Corey and Miranda on their daughter’s birth!

Confirmed! Maci Bookout is pregnant: ‘We still can’t believe it’

Robbie Kidd admits to affair with Leah Calvert in October