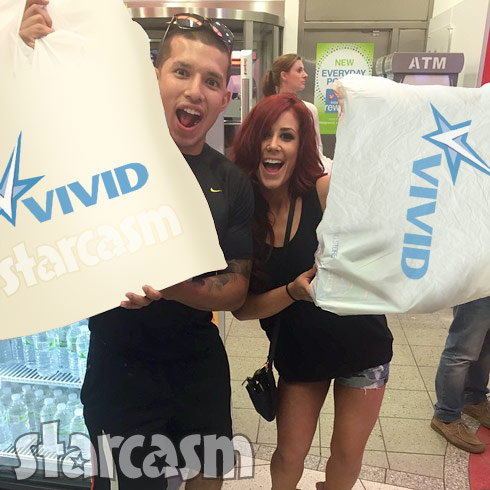 News broke earlier today that Vivid Entertainment is reportedly in possession of a sex tape starring Teen Mom 3 star Mackenzie McKee. The story drew a reaction from Teen Mom 2 star Chelsea Houska on Twitter, who seemed to be experiencing a bit of déjà vu:

Chelsea’s tweet caught the attention of her Teen Mom 2 co-star, Kailyn Lowry’s husband Javi Marroquin, who responded with a laughing and crying emoji. Chelsea then asked Javi if he and Kail might soon strike a deal with Vivid:

His response would seem to all but guarantee we won’t be seeing a Javi and Kail sex tape any time soon.

these lame a** sex tapes. We’re gonna make it worth it. Sike, I’ll go to jail for murder before that https://t.co/caOWs7s9ny

Strangely, Javi didn’t ask Chelsea if we could expect an announcement from Vivid about her and beau Cole in the near future.

As far as the fate of Mackenzie’s video, The Ashley’s Reality Roundup spoke with an expert in the business of sex tapes who helped broker and promote both the Kim Kardashian and Paris Hilton tapes. He says that Mackenzie is “100% in bed with Vivid,” and that “TMZ will only print sex tape stories where they now know the celebrity is in on the deal.”

Based on what she has learned, The Ashley predicts we will be seeing Mackenzie’s X-rated rodeo ride “within the month.” While we wait, I thought I might propose a few potential titles for Mackenzie’s video:

UPDATE – Kailyn has since tweeted what appears to be her response to the Mackenzie video news:

We chose to share our lives on a teen mom show but that’s where the similarity ends. Not all of us are interested in at fame at any cost. — Kail Lowry (@KailLowry) July 2, 2015

I’ve made my own fair share of mistakes and I, in no way, want to be linked to the mistakes of others.

In other news, my husband and best friend surprised me with my bff flying in from NM. Does that deserve husband of the year articles? — Kail Lowry (@KailLowry) July 2, 2015