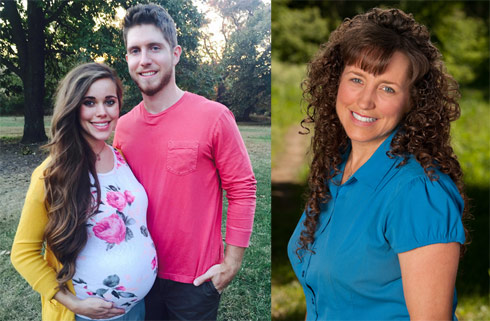 As you are probably aware, former 19 Kids and Counting star Jessa Duggar gave birth to her first child Thursday night: a 9 lbs., 11 oz. baby boy. Although mom and the baby are now healthy and happy, things were touch-and-go for a bit, as an ambulance had to be called to the Duggar home to take Jessa to the hospital due to complications.

TMZ shared this video clip taken by a passerby who happened to notice the ambulance outside “the address where [Josh Duggar’s] Ashley Madison account was used”:

The video had many wondering if Jessa was able to deliver the baby at home as she had hoped, or if the complications occurred before the baby was actually born–with the delivery taking place at the hospital…or even in the ambulance.

The 911 call placed by Michelle Duggar was later released. It reveals that Jessa did give birth at home and was then taken to the hospital as a precaution, due to excessive bleeding. During the call, Michelle showed her experience with delivering babies by remaining extremely calm:

MICHELLE: Mother is bleeding after birth.

OK. We’re getting help on the way. We need —

[Michelle, speaking to someone with her.] We need her chest out.

Yes. We need her to be chest out.

OK. Are you with her now?

Yes. With her now.

How old is she?

OK. Is she awake?

OK. Is she breathing?

And was she full term?

OK. Ok. It’s important for us to watch the baby and the mother to be sure that they’re both alright.

Use a blanket to keep the mother warm in case anything changes.

Blanket to keep the mother warm.

We still don’t know his name. I want to know!

OK. And is there serious bleeding? Um, there was quite a bit of blood, but when the placenta detached — Uh huh. But the uterus is hard now. OK. [to Jessa] Mmmm hmm. I’m massaging your uterus. OK. Hang in there. So the afterbirth has already been delivered and everything? Yes ma’am. OK. And she’s not bleeding — is she still bleeding right now? No. She’s better now. Better now, it’s just a lot of blood initially when — OK. OK, she’s talking, and color is good. OK. Just, if you can, wrap the afterbirth in a towel and keep it in case she needs to go in. Wrap the afterbirth in a towel in case [inaudible] Yeah, the doctor will need to examine it to be sure it all came out if she needs to be transported, OK? Alright. OK, I’m going to go ahead and just stay on the line with you as long as I can. OK. If anything changes with her, I need you to let me know, OK? Yes. Yes, OK. OK. Her uterus is firm. OK. Do you have somebody that can unlock the door and turn on an outside light for us? [To someone present] Um, unlock the door and turn on any outside light switch. Yes. Thank you. [Michelle talks with people present – inaudible] How’s she doing ma’am? She’s doing good. Alert. Drinking her drink. [inaudible] The baby still doing good ma’am? The baby is doing wonderful. Excellent. The baby is great.

I believe the fire department’s going to be outside.

Do you see them?

Alright. Thank you so much.

Congratulations again to Ben and Jessa Seewald! At this time, it is unknown if the TLC cameras were rolling for the new Jill & Jessa: Counting On series premiering in December. Also unknown is the little fella’s name! Stay tuned!

PHOTOS Why is Josh and Anna Duggar’s house for sale?