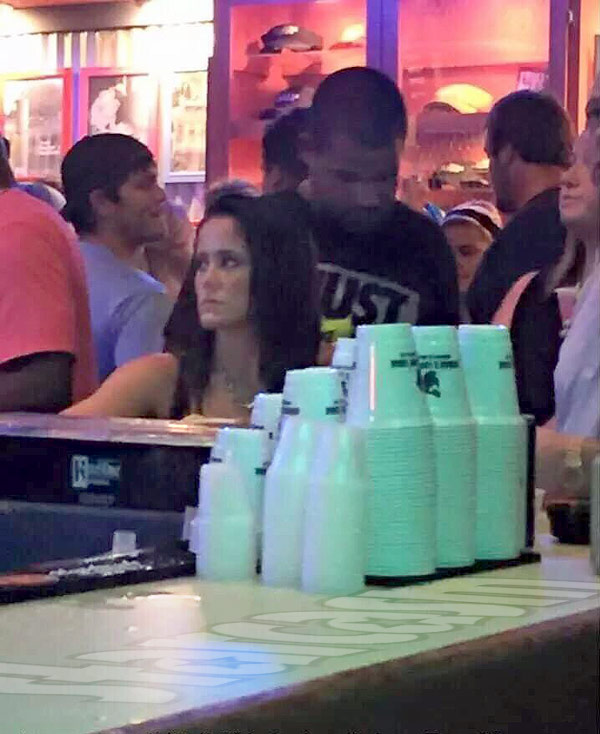 The Teen Mom blogiverse is rampant with “I seen ya with Kieffuh!!” quotes, after Teen Mom 2 star Jenelle Evans was photographed with her ex Kieffer Delp at a South Carolina bar Friday night.

The photo above is making the rounds on social media. In it, you can clearly see Jenelle and Kieffer waiting for drinks at a bar. According to The Ashley’s Reality roundup,”Jenelle and Kieffer apparently had a ‘la dee dah’ time drinking and bar-hopping by the beach, as they were spotted at numerous bars throughout the night.”

In addition to meeting up with Kieffer, Jenelle also reportedly reached out to exes Courtland Rogers and Gary Head after her most recent split from fiancée Nathan Griffith. According to the report, Gary tweeted and deleted a screen cap of an alleged conversation with Jenelle from last week–in which she asked him to come stay with her.

I know u see this so for the record… I forgot how much better than u I was lol thank god for self worth.. Make that boy take a shower ?

The rather diligent anti-Jenelle researchers have put together quite the narrative for the Jenieffer reconciliation. It includes Jenelle paying for Kieffer’s bus ticket to South Carolina, and an altercation between Nathan and Kieffer–after Nathan found Jenelle and Kieffer together at Jenelle’s house Saturday morning, that is. Nathan reportedly left and Kieffer stayed. (Note that none of this has been confirmed.)

Jenelle and Kieffer have remained relatively silent on social media over the last couple days. Kieffer has only tweeted lyrics from the Taking Back Sunday song “Sink Into Me:”

Jenelle recently spoke about Kieffer in a radio interview on WKZL’s “Jared and Katie in the Morning.” “We talk every once in a while. He’s doing fine,” Jenelle revealed. “He has a job and his own apartment and stuff now. I’m really happy that he’s got his life sorted out.” I guess it might be time to fire up the ol’ Jeniefferometer!

Let’s see what it says: