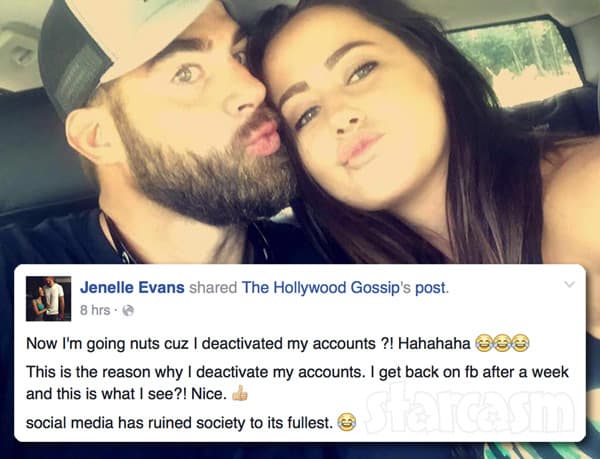 After her secret pregnancy was confirmed by a police accident report on Friday, Teen Mom 2 star Jenelle Evans had a bit of a meltdown on social media before deleting her Twitter account and stepping away for a few days. She returned earlier today, and was not impressed with what she saw.

The expectant reality star shared a Facebook post by The Hollywood Gossip in which they linked to an article on Jenelle’s actions after the pregnancy reveal. The site described the link by asking “Is she going nuts?”

“Now I’m going nuts cuz I deactivated my accounts ?! Hahahaha ???.” Jenelle wrote. “This is the reason why I deactivate my accounts. I get back on fb after a week and this is what I see?! Nice. ?? social media has ruined society to its fullest. ?” 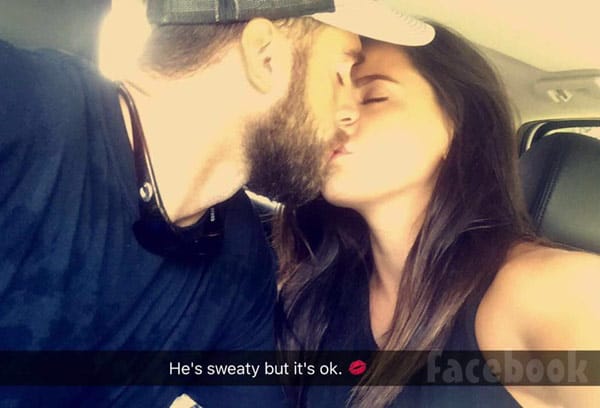 After that little bump in the social media reentry road, Jenelle got back to updating fans on what’s going on with her — which is that she and boyfriend David Eason are currently clearing some land on which they plan to build a house.

“Super excited, cannot wait for our future together,” Jenelle wrote along with a batch of photos with dad-to-be David and their property. “Our land is almost fully cleared. Happy the soil test went well and everything is running so smoothly. Yayyyyyy!!!!! ??”

Here is the lot they are clearing — click to enlarge:

It seems Jenelle’s wild life is going to fit right in wherever they are building the house, because it’s surrounded by wildlife! “So far on our land we found acorn, pecan, maple, oak, short leaf pine, and long leaf pine trees. The wildlife we have encountered is turkeys, deer, and just saw a 300 lb. black bear eating in the field across the street!!!!!! So crazy lol ???”

I dunno — that bear might have been a paparrazi in disguise trying to get some pregnancy photos!

Are Leah Calvert’s subtweets about ending her marriage to Jeremy Calvert?