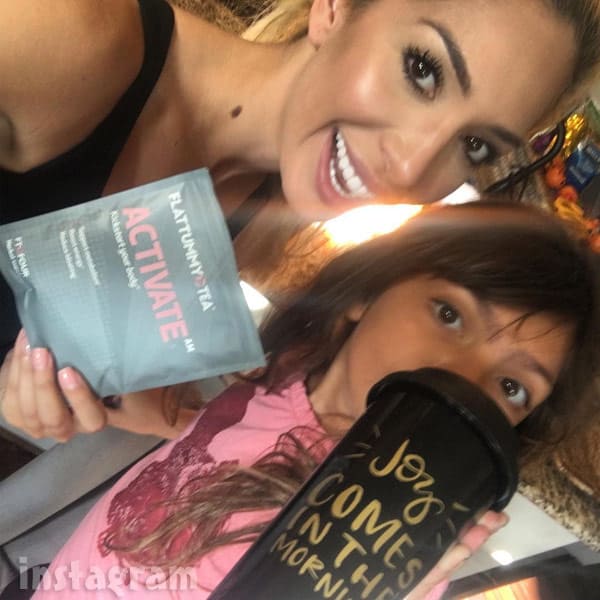 Teen Mom OG star Farrah Abraham is no stranger to controversy, and MTV’s polarizing reality star is under fire yet again — this time for a social media post involving her 7-year-old daughter Sophia.

The 25-year-old Teen Momtrepreneur was criticized online after posting a mommy-and-me photo Tuesday as promotion for Flat Tummy Tea (a detoxifying tea used for weight-loss), which featured her young daughter sipping an unidentified liquid from a black tumbler cup. In the photo, Farrah held up a package of her go-to weight-loss tea and flashed a smile while her daughter Sophia sipped from her cup.

“Teatime @flattummytea @sophialabraham & I- after all that candy,” Farrah wrote in the caption on Instagram.

Her followers were quick to assume that Farrah had given her young daughter some of the Flat Tummy Tea in her cup as well, and they blasted the Teen Mom OG star in the comments on her Instagram post. Many were outraged that she would give her child a laxative tea that has not been regulated by the FDA, according to Us Weekly.

“Why would you give your daughter weight loss tea? Worst mom in the world!” one Instagram user wrote in the comments on Farrah’s post.

But Farrah released a statement and clarified that Sophia wasn’t actually drinking the laxative tea in her cup.

“She has strawberry milk and I have my tea,” Farrah told Us Weekly. “She wanted to take a pic like that, so no, my daughter does not have tea in her cup.”

This isn’t the first time Farrah has caused outrage with her parenting choices, though. Fans have criticized Farrah for treating her daughter Sophia like an adult and allowing her to have her own social media accounts on Twitter and Instagram. Little Sophia also has a big-girl job as the owner of her own children’s boutique, Sophia Laurent in Texas where she is also in charge of hiring and firing her staff.

Farrah also came under fire over the summer when she posted a series of shots from Sophia’s bikini modeling photo shoot, where many critics felt Sophia was too young to be modeling in two-piece bikinis with full hair and make up. And who could forget that whole unibrow waxing fiasco?

Win a date with Farrah Abraham to celebrate her 21st birthday!