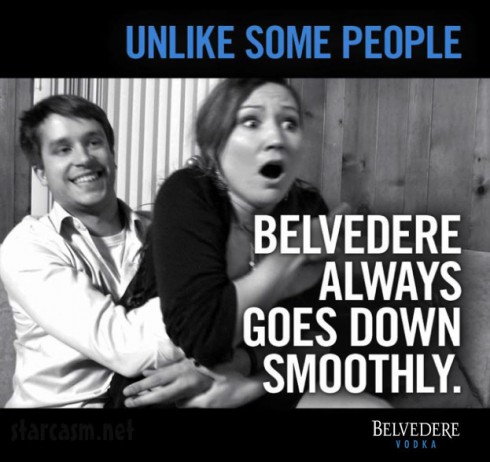 Belvedere Vodka took tasteless advertising to an entirely new level Friday when they posted the above photo on Twitter and Facebook featuring a seemingly terrified woman trying to resist a man grabbing her from behind along with the slogan, “Unlike some people, Belvedere always goes down smoothly.” 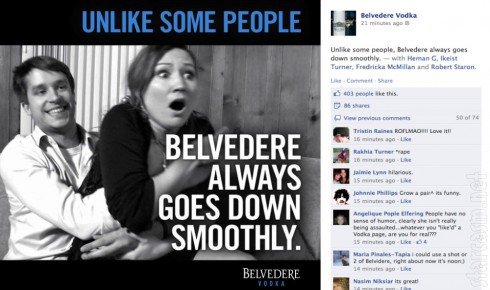 The ad instantly spawned a backlash (and a surprising number of supportive comments tbh) and it was soon pulled by the liquor brand. After pulling the advert, Belvedere issued this official apology:

We sincerely apologize to any of our fans who were offended by our recent post and related comments. As always, we continue to be an advocate of safe and responsible drinking.

What? So they think what was offensive about the ad was that it didn’t advocate “safe and responsible drinking?”

Jason Lundy, the Senior Vice President of Global Marketing for Belvedere, did a little better with his apology a few hours later:

I am Jason Lundy, SVP of Global Marketing for Belvedere.

Unfortunately a Facebook &Twitter posting was made today that has offended many of our fans and followers — and indeed the people who work here at Belvedere. The post is absolutely inconsistent with our values and beliefs and in addition to removing the offensive post we are committed to making sure that something like this doesn’t happen again.

As an expression of our deep disappointment and regret, we are making a charitable donation to a women’s support cause. We deeply apologize to our fans & followers.

That was followed today by yet another apology from the President of Belvedere Vodka, Charles Gibb:

My name is Charles Gibb and I am the President of Belvedere Vodka. I would like to personally apologize for the offensive post that recently appeared on our Facebook page.

It should never have happened. I am currently investigating the matter to determine how this happened and to be sure it never does so again. The content is contrary to our values and we deeply regret this lapse.

As an expression of our regret over this matter we have made a donation to RAINN (America’s largest anti-sexual violence organization.)

How in the world does something like this make it through all the stages of approval? I’m guessing the marketing department at Bevledere Vodka is much like Mad Men‘s Sterling Cooper Draper Pryce, except without Peggy Olson.

Incredible photo of a tranquilized bear in mid-air