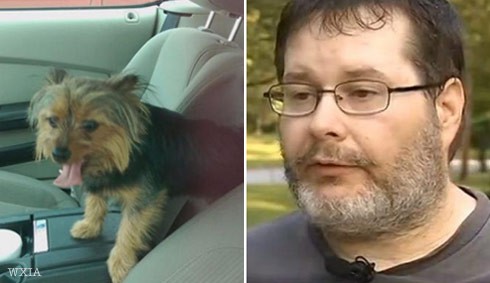 Police in Georgia arrested Army veteran Michael Hammons on Saturday after he busted out the window of a Mustang convertible (the top was up) to free a Yorkshire terrier that was panting away inside.

Hammons noticed a crowd gathered around the car. The onlookers said they were waiting for police to arrive to free the little fellar. Hammons felt like he needed to go ahead and take action so he grabbed the foot rest of his wife’s wheelchair and busted out a window.

“I’ve got PTSD, and I’ve seen enough death and destruction. And I didn’t want anything else to happen if I could prevent it.”

While some applauded Hammons the owner of the Mustang was furious about the damage to her car. She demanded that officers press charges stating that she had only been gone a few minutes – a claim witnesses refute.

Oconee County Sheriff Chief Deputy Lee Weems explained to NYDN that they had “no other choice” but to grant the car owner’s wishes. Hammons was arrested, charged with criminal trespassing and released on his own recognizance. He could face up to a year in prison and a $1,000 fine if convicted.

Weems added, “I understand why he did what he did, but we don’t get to decide whether people are guilty or innocent. That’s why we have juries.”

The car owner was cited by Oconee Animal Control Services under county ordinances.

VIDEO – Incredible near miss captured on tape: Russian man almost gets hit by a bus and a car!