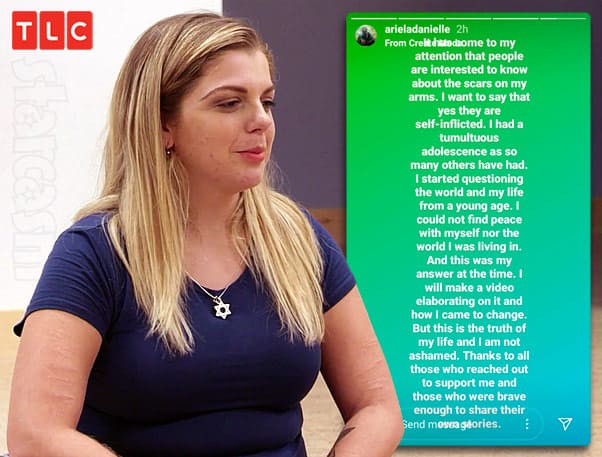 90 Day Fiance: The Other Way star Ariela Weinberg shared an Instagram post last week responding to viewers who couldn’t help but notice the numerous horizontal scars on her upper arms. In the post, Ariela confirms that the scars are from self-inflicted wounds that were the result of a “tumultuous adolescence,” but she is quick to point out that she is not ashamed of the scars as they are part of the “truth of [her] life.”

“It has come to my attention that people are interested to know about the scars on my arms,” Ariela began a text graphic uploaded to her Instagram stories earlier this week. “I want to say that yes they are self-inflicted,” she continues.

Ariela then reveals a little bit abut the circumstances that caused her to want to cut herself. “I had a tumultuous adolescence as so many others have had. I started questioning the world and my life from a young age. I could not find peace with myself nor the world I was living in. And this was my answer at the time.”

The Instagram post didn’t go into specific details, but Ariela says there is a video coming soon with more information. “I will make a video elaborating on it and how I came to change,” she wrote. “But this is the truth of my life and I am not ashamed. Thanks to all those who reached out to support me and those who were brave enough to share their own stories.”

I do not know if it is connected, but the 90 Day Fiance Twitter account revealed some info about Ariela’s childhood as part of their behind-the-scenes series of tweets. “Ari’s childhood home was lost in a fire, so seeing the exposed wires and other electrical issues at this apartment makes her extra nervous,” the account revealed in response to the scenes in which Ariela saw her unfinished apartment in Ethiopia for the first time.

“Yes this is one hundred percent true,” Ariela replied.

Ariela did not say what platform we can expect the forthcoming video to be posted on. We will keep an eye out for more information from Ariela.

Until then, be sure to keep up with her and Biniyam’s dramatic international love story with new episodes of 90 Day Fiance: The Other Way airing Monday nights at 9/8c on TLC.

If you’re REALLY impatient for more Ariela and Biniyam, then I recommend you check out our posts about his previous marriage to an American woman (that includes A LOT of visa drama getting Biniyam to the United States for the birth of his son as well as a wedding video) and Ariela’s appearance as the hot hook up in an Ethiopian hip hop music video!

90 Day Fiance The Other Way spoilers for Ariela & Biniyam Shibre https://t.co/fhIRowxCsf via @starcasm

Watch #90DayFiance #TheOtherWay star Biniyam's wedding video from his 2017 marriage to an American woman named Bria. The ceremony is in the United States and was after the couple's Ethiopian wedding. The US wedding was also after the birth of their son. https://t.co/8JnbBkPU8B