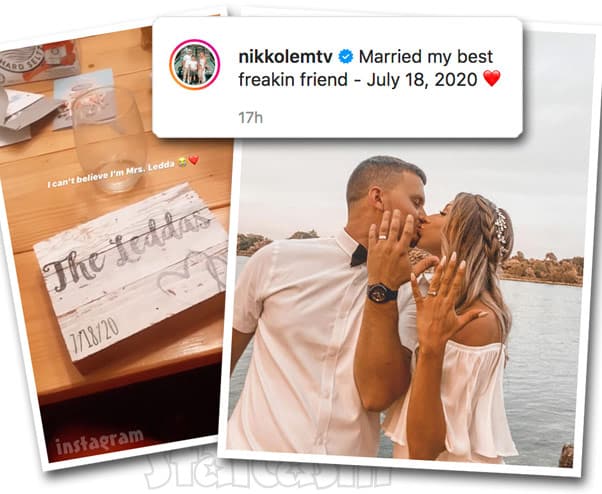 Congratulations are in order for 16 and Pregnant mom Nikkole Paulun! The 26-year-old former reality star revealed that she got married on Saturday with an Instagram photo of herself and her new hubby (included above) showing off their new rings.

“Married my best freakin friend,” Nikkole captioned the image, adding the wedding date of July 18, 2020 as well as a red heart emoji.

UPDATE – Nikkole later revealed that they eloped and hope to have a traditional wedding ceremony in the future:

We’re planning our big, dream wedding for 2022 (hopefully) but with how crappy this year has been we really wanted to come out of it with something good to remember. And we really just didn’t want to wait years to be married to each other.

Nikkole and her husband Kyle Ledda have been dating for a little more than three years. The couple first went public with their relationship back in September of 2018 when Nikkole shared a photo of the two of them on Instagram. “Meet the love of my life,” Nikkole began her introductory caption. “The kindest, most patient, & loving person I’ve ever known. My heart needed him so bad and I feel beyond lucky every day. He’s exactly what me & the kids needed and we love him so much ❤️”

Nikkole would later reveal on YouTube that she and Kyle had been dating for more than a year and a half at the time. She also revealed that they have known each other since high school. She said she even invited Kyle along to a Kevin Hart stand up show back in late 2012 after she won a pair of tickets. “I took him with me because I had a crush on him,” she recalled in the video. “I took him, but nothing happened. It didn’t really go anywhere, but we stayed friends. We’ve always been friends.”

The two later interacted on SnapChat and Kyle suggested they go on a date. Despite being nervous and having sworn off dating until she was at least 30, Nikkole went through with it. Fast forward three years and they are a happy family of four!

The wedding was some much needed good news for the couple as they are still dealing with the loss of their unborn baby last month. Nikkole revealed that they she went in for an ultrasound when she was 11.5 weeks pregnant and they discovered that the baby had no heartbeat.

#16andPregnant mom Nikkole Paulun reveals that she recently found out her unborn baby has no heartbeat. The sad news comes just weeks after Nikkole revealed that she is now engaged. https://t.co/7CogjLsnf5

Nikkole later updated with an Instagram photo of herself in bed with the following caption:

I want to be honest with you guys and tell you that losing my baby has been even harder on me than I thought it would. Most days I don’t get out of bed until noon. I spend a lot of time asking myself the same questions over & over again. Why did it happen? Was there something wrong with the baby? Is there something wrong with me? Was it the lunch meat I ate? Was I too stressed out? As much as I tell myself or listen to others tell me that it’s not my fault, I can’t get rid of the aching feeling that it somehow was. It just breaks my heart even more that I’m finally with the right person who was SOOO excited to be a dad, only for us to lose the baby. I just want her back and to be happy again 💔

But let’s get back to the good news… Congratulations to Nikkole, Kyle, Lyle, and Ellie on the wedding!

I will leave you with some of Nikkole’s posts expressing her love for Kyle and her gratitude for what he has meant to her life and the life of her kids:

My family 😊 we took a trip to a farm today and had so much fun! I can’t say enough how lucky we are to have Ky in our life. I don’t know what I would do without these 3. We aren’t perfect and there are days where we struggle but at the end of the day, it only feels like home when we’re all together. ❤️

We tried taking a pic of the two of us and Ellie just HAD to jump in 😂 I can barely put into words how thankful I am to have such a good man to love not only me, but the kids too. I always prayed one day I would get things right and be with someone they could admire and look up to and that’s exactly what he is. He is the missing piece to our puzzle and the best thing that’s ever happened to us! A NEW VIDEO is up and I tell you guys how we met, how I introduced the kids, and plans for the future! Link is in the bio ❤️

Today was a special day. Since my son started school 6 years ago he’s missed “donuts with dad,” “superhero dad night,” and countless Father’s day events. He’s came home from school with blank pages that were meant to be Father’s Day cards. He’s asked to sit out of activities where all the kids make Father’s Day crafts. He’s felt like life isn’t fair and has been jealous of all the kids in school who get to go to events and talk about their dads. Before Kyle came along, he asked and begged that he get a step dad one day. He asked for someone who would be nice to us and play video games with him. Kyle is honestly all of that and MORE. Tonight, Lyle got to attend his very first ever dad event… “Pizza with Dad.” I can’t tell you how special this is for a boy like him and how long he has yearned for this experience. Today was special and tonight I am grateful ❤️

Can’t put into words how grateful I am for the love Kyle shows my babies. From day 1 he’s made them a priority in his life. I’ll never forget the first time he met Ellie. He was more focused on keeping her happy than spending any time with me 😂That was also the first time (out of thousands) that he watched Trolls and Coraline. The first time he met Lyle (we waited longer with him since he’s older) he texted me and asked me what his favorite snacks were and brought over a big bag of them to try to win him over. He truly loves being a father figure and helping me raise these two. He takes over the bedtime routine on nights I’m too tired and honestly gets it done faster and better than I do. He plays barbies with Ellie and hours of video games with Lyle without even complaining. He takes on the role of “soccer dad” on saturdays and proudly takes Lyle to his soccer practices since I have to work and can’t make it. He’s even a pro and fastening a 5-point harness and an expert at helping Lyle with an asthma attack. He’s everything I dreamed of and hoped for in a man and a father figure for my children. We are all so lucky to have him in our lives ❤️