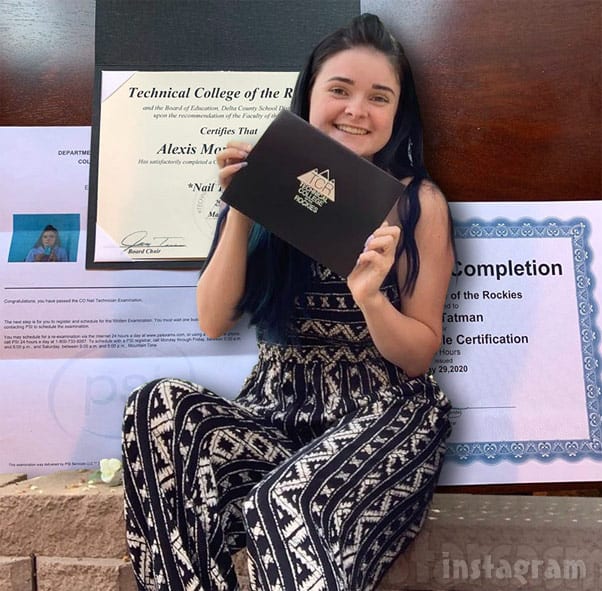 Lexi made the announcement on Instagram with photos of her Technical College of the Rockies certifications as well as a letter she received letting her know she had passed the Colorado Nail Technician Examination. The photos were accompanied by a lengthy caption in which Lexi detailed the crabs-in-a-bucket mentality she has encountered with pretty much every major life decision she’s made in the past few years.

When I was 17 I got pregnant. They told me I was ruining my life.

When I had Tobias, the pediatrician who was in the hospital told me and Kyler that they (her specifically) did not celebrate teen pregnancy and that the best thing we could do was to stay in school and further our education. I had just graduated early. I missed 1 day of school to recover.

When I decided to go to mortuary school I was told I was weird.

When I decided that mortuary school was not for me and I transferred to nail technology I was told I was dumb, that I was making a mistake and I would provide a terrible life for my children.

When I graduated nail school I was told I’d always just be a nail tech and nothing more.

I have been put down for my accomplishments in life because others didn’t agree with them. A few days ago I passed my last state exam and officially became a licensed nail technician. And I’m proud to say all of my life choices have lead me to this big achievement. I cannot WAIT to start doing what I love and have a talent for 💛 in other words… NAILED IT

Lexi’s reply: “@ashleysiren thank you lovely! 💖 I’d love to do your nails when you can have them sometime. Heck even just a mani/pedi❤️”

Congratulations to #TeenMom #YoungAndPregnant's @lexi_tatman as she and @CyberTheWarrior welcome their second child, a baby boy named Jay, after somehow managing to keep her pregnancy a secret! 👏👏👏https://t.co/8pPscIxFXG

As a Teen Mom fan and blogger, I’ve witnessed a lot of the negativity directed towards Lexi (and most all of the moms from the franchise) over the years. It’s very difficult to deal with that sort of negative attention, especially when you are at a very young age and are getting exposure due to the combination of getting pregnant as a teen and being on a reality show.

Normally, responding to the negativity is a no win situation, as implied by the “crabs in a bucket” metaphor. But, Lexi has consistently responded to the negativity directed at her with positivity and maturity. She’s vocalized her frustrations and defended herself (and Kyler) against accusations and disparaging remarks without allowing them to drag her down.

Lexi provided another example of exactly what I’m talking about earlier this month. She shared an image of the stretch marks on her stomach after having two children and penned a message condemning body shaming while revealing that she is comfortable in her own skin.

I’ve written, deleted, thought, rewritten and debated this post. As you can see this is my body. My body has been in an accident, been injured during sports, has had scrapes and bruises. My body has carried 2 babies, went through 2 labors and stretched beyond limits. My body has done a lot for me.

I recently saw a post body shaming Dua Lipa as “Instagram v reality” and it didn’t sit right with me. As you all know I’m very body positive, if you’re happy and healthy I see no reason for you to have to look a certain way.

I’ve always struggled with my weight. I’ve always been seen as sticks and bones or underweight. It’s caused a lot of esteem issues, especially when it’s a struggle to fit into clothes. After I had Tobias, I was comfortable in my skin, but I never wanted to show it. I couldn’t accept what my body looked like. I spent nights staring in my mirror picking at every insecurity and trying to find a remedy online that didn’t involve surgery. I tried working out and eating healthy, which I failed in miserably. I was back at my pre-baby weight which made me disappointed. I wanted to weigh more. I wanted to gain muscle and have a booty (lol).

After I had Jay, I was more confident in my body. Maybe I had become used to what it looked like and was happy it didn’t change a lot. Except it did and I was blind to it. ABs separated, bones had separated and I finally no longer had gestational diabetes.

I got a lot questions asking how I lost my baby weight, how I snapped back so fast. I didn’t know how to answer, genetics for sure played a big role. My age as well. But to those questions I was dumbfounded.

What I saw was not what others were seeing. They saw the real me, they didn’t see the flaws I did (minus my belly button but that’s hard to miss🤣) and they still wanted to know what I did. I had gained a lot of confidence after having Jay. Not just in motherhood but in myself and body as well.

I’m not sure where I’m going with this post really, I’ve just been seeing so many ads, videos etc on Instagram and Tik Tok pressing what women should look like. If you’ve read this far, thank you for sticking with my ramblings, but what I really want to say is your body is amazing. It is strong, it stretches and heals itself. Don’t let your eyes trick you, don’t let social media pressure you into changing yourself. Bodies are beautiful.

…Moral of this: Bodies are amazing and push the limits everyday. Don’t let someone steal your light and happiness by them telling you what you should do 💕

Congrats and kudos to Lexi!