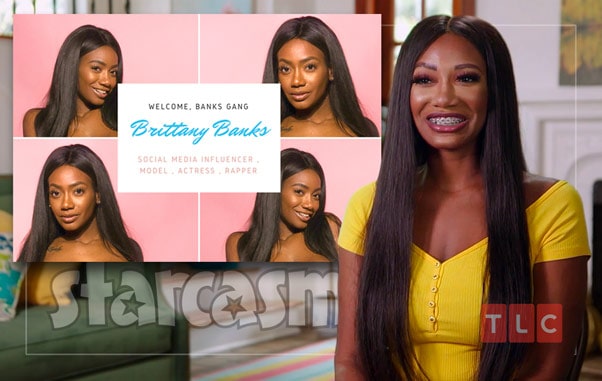 On 90 Day Fiance: The Other Way Season 2, fans will get to meet 26-year-old Brittany Banks, who is heading to Jordan to potentially remain and live with her Muslim fiance Yazan. Brittany won’t be making her official TLC debut until the Season Premiere on Monday, June 8, but her face, voice, and/or booty may be familiar to some fans already.

Brittany has built up quite a substantial Instagram following, thanks in large part to her large part — aka her ample derriere. She’s also ahead of the usual 90 Day schedule in that she already has an OnlyFans account or two. And did I mention that she’s a rapper as well?

Brittany talks about her music skills in her intro on the show. “I do a lot of different things: marketing tours, modeling,” she says. “But, the work I’m most passionate about is my rap career.” She then spits a bar referencing Yazan:

I stay fresh,
I stay clean,
to the death of me.
It’s my sauce.
I can’t give your ass the recipe.
Arab money ’cause my man,
he from the Middle East.
I need access to them accounts,
open sesame.

I couldn’t really find much online featuring Brittany rapping, but I did manage to track down the song that she sang a verse from! It appears to be titled “Turn You Out” and was recorded under the name “Boss Brittany.” Give it a listen:

As far as her influencer game, Brittany already has a larger Instagram following than most former 90 Day Fiance cast members with a whopping 320k. Some 90 Day Fiance fans have already started calling her out for buying followers because the number of likes and views on most of her posts don’t seem to reflect that large of a following.

Brittany has been VERY defensive and she’s made numerous posts responding to the allegations of buying her following. “I took all my photos down & changed my name,” she explained in an Instagram story post. “I changed my brand! That’s why I have 327k followers and not a lot of likes or comments. If I post a booty picture I’ll have like 39,000 likes. But I don’t want to.”

Brittany shared screen caps of numerous posts with very high view and like counts, some of which have since been deleted. It doesn’t take too much research to find a lot of evidence to support what Brittany says. Her booty vids are quite popular, and you can still find the ones she deleted because they were shared so many times. You can click HERE and HERE for a couple samples, but know that they aren’t very SFW.

While I am on the subject of Brittany and not very SFW, you can check out her OnlyFans accounts under the names @ItsBrittanyBanks and @ItsTheBrittany. I’m not sure how OnlyFans verification works, but both accounts have a check mark? (Linking to OnlyFans is becoming a bit of a no-no as far as advertisers go, so you’ll have to check those out manually.)

Neither of the OnlyFans accounts appear to have much content, and the most recent activity on either is from January of this year.

Plants give me life , literally. I am their mother and they are my babies. A true goddess ,I am Mother Earth 🌍 👙 @prettylittlething

As far as Brittany being an actress, the only examples I could find are a series of YouTube videos she did with skit comedian TPindell. Here are a couple of examples — one from Brittany’s channel, and one from TPindell’s:

Brittany can now add podcaster to her growing resume as she recently announced the launch of her AngryKat podcast. Here’s the first installment posted to YouTube:

The Other Way viewers will be fresh on the heels of 90 Day Fiance: Before the 90 Days Season 4, which featured A LOT of cast members who seemed to be on the show just to get exposure, so I’m guessing they are going to be pretty reluctant to buy into Brittany’s story line. We will all just have to tune in to find out whether her and Yazan’s relationship is believable or not!

90 Day Fiance: The Other Way Season 2 premieres Monday, June 8 at 9/8c on TLC. Meet the entire cast in the link in the tweet below!

90 DAY FIANCE Tiffany & Ronald break up; she says he’s ‘a toxic person’ while he says ‘I was a pet to her’