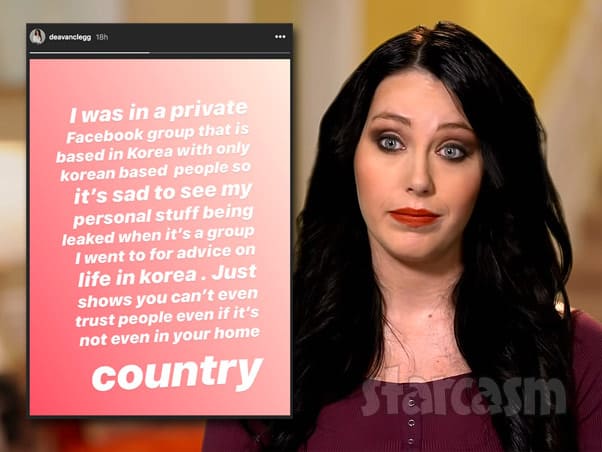 We have another 90 Day Fiance: The Other Way pregnancy announcement! Less than two weeks after Laura announced she was pregnant (then later revealed she had an ectopic pregnancy), her co-star Deavan Clegg has seemingly revealed that she is currently pregnant with her third child, her fourth if you count Jihoon.

Unfortunately for Deavan, the reveal was unintentional. She was apparently posting some of her concerns about being pregnant again in a private South Korean Facebook group, and someone then shared her post publicly. Deavan later seemed to confirm that the Facebook post was authentic as she expressed frustration over the news being leaked before she had even told her parents!

So I am currently pregnant and do not have health insurance in Korea and I don’t know where to start or what to do. I just found out my insurance is not international. I’m also unaware of how much it will cost to have a child here. And I’m starting to think I should go back to my home country because of this.

I was in a private Facebook group that is based in Korea with only Korean based people so it’s sad to see my personal stuff being leaked when it’s a group I went to for advice on life in Korea. Just shows you can’t even trust people even if it’s not even in your home country.

Deavan added a caption revealing that she hadn’t told her parents yet:

Please out of respect stop messaging me and asking me I’m not going to speak about it. I trusted this group and it was my safe space for a long time. I know the person who did it and it saddens me that they did this. But I’m leaving it at that. I need time and I haven’t even told family because of how early it is so stop messaging me about this topic.

Deavan being pregnant again seems to explain in part why she felt like she needed to speak out against her co-star Laura after Laura admitted to lying about currently being pregnant in hopes that her husband Aladin would unblock her. Here is Deavan’s message soon after Laura’s admission:

I wasn’t going to speak out on this. But knowing what I do I need to speak up. It is never okay to lie about being pregnant and use it as a way to get an abusive person’s attention. I’ve experienced abuse and the best way to escape is to leave it and not bother with it. At that point you are enabling the abuse. I know the truth and I will leave it at that. I’m very saddened and disappointed to see all this.

Deavan and Jihoon are reportedly filming for another season, so a second pregnancy will certainly guarantee a compelling story line. I get the impression that the pregnancy was not planned, so I expect we will be seeing a scene in which childlike Jihoon shares his reasons for not wanting to wear a condom.

On a positive note, at least Deavan and Jihoon will potentially have a use for that second car seat that he bought!