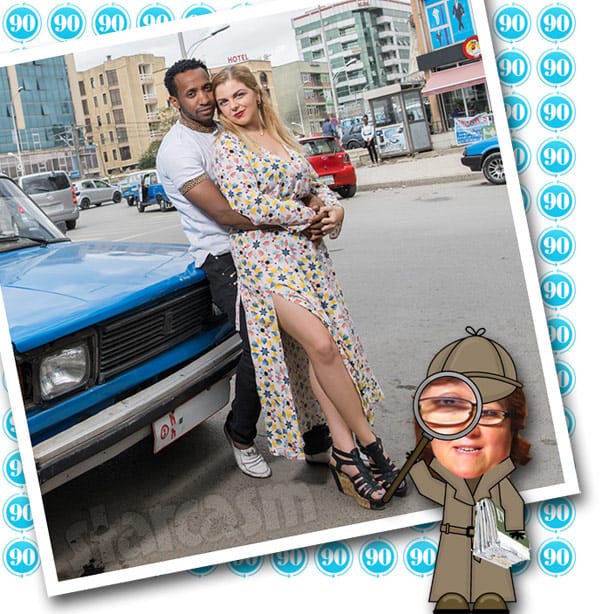 TLC just released the new trailer and cast info for the second season of 90 Day Fiance: The Other Way, and it couldn’t have come at a better time for 90 Daytectives currently stuck at home during the coronavirus pandemic! After sharing our post with the trailer, as well as photos and bios for all six couples featured this season, I immediately created a brand new Evuhdense Binder and got to sleuthing.

I’ve already turned up quite a bit on the new cast, including some VERY interesting info on Ariela and Biniyam!

In case you missed it, here is the TLC bio for Ariela and Biniyam:

Ariela, a recent divorcee, had no plans to fall in love again this quickly. While on a soul-searching trip around the world, she met Biniyam in Ethiopia and ended up staying for a couple of months. Before returning to America, Ariela found out that she was pregnant. She decided to eventually move back to Ethiopia for the birth of their baby so that Biniyam could be present. However, the living conditions and healthcare system where Ariela will give birth and live with her new family make her and her family nervous for this big move.

I will start with a very rudimentary timeline for Ariela and Biniyam. The first social media post I could find in which either of the couple references the other is from March 1 of 2019. According to a Facebook post by Ariela, she was Biniyam’s manager for his first boxing match. “So happy for you Bini and proud to manage you!” Ariela captioned a photo of Biniyam after a victory. “Baby won his first time fighting as a boxer, not once but twice in one day. No small feat.”

Boxing is just one of the numerous entries on Biniyam’s extensive resume — most all of which revolves around his physical abilities. His Instagram bio lists martial artist, dancer, choreographer, gymnast, personal trainer and artist. I’m not too sure about his talents as an artist, but Biniyam CERTAINLY has some skills in those other fields — including being a member of Ethiopian team at the 2019 World Championship of Taekwondo in Brazil! (He kinda reminds me of an Ethiopian version of Before the 90 Days star Patrick Cornett.) 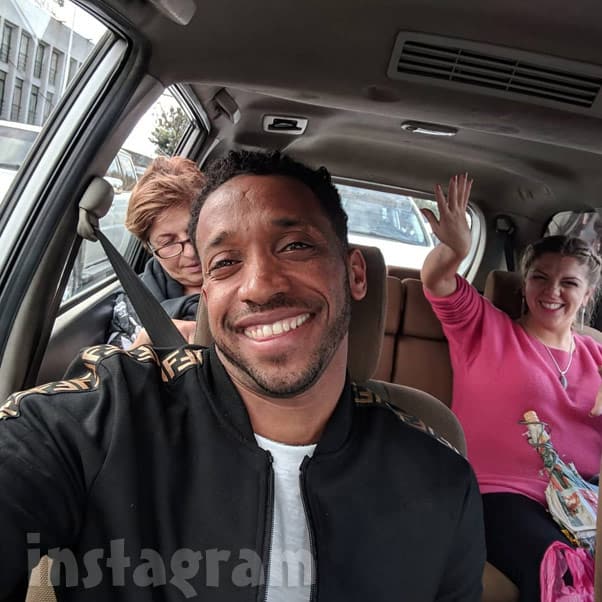 It’s unclear when Ariela and Biniyam’s relationship turned romantic, but it appears that she got pregnant shortly after Biniyam’s boxing debut on March 1. Her sister shared a photo of Ariela 27 weeks pregnant on September 29, just before Ariela left America to go back to Ethiopia.

I haven’t run across any information about when Ariela’s baby was born, but she has posted several times on Facebook over the past few months about her baby doing well. She also mentions a potential return to trip to the United States, so I am guessing that she is currently in Ethiopia.

I wasn’t able to find out much about Ariela’s ex-husband, but I did find out quite a bit about Biniyam’s ex-wife — who is an American! And who has a son with him! Oh, and there’s LOTS more!

A young woman from Iowa named Bria relocated to Addis Ababa, Ethiopia in November of 2014 “to work with impoverished children and their families at the Brook Hills Organization in Korah, a rural village whose residents live primarily off food from a massive trash dump in town,” reports The Hawk Eye.

More from the article:

Shibre met her future husband, Biniyam Shibre, at a dance club in his hometown of Addis Ababa.

“He ended up teaching me some ways of Ethiopian dancing and so we were dancing together some,” Shibre said. “It was fun.”

“He has such a serving heart and so it’s neat that God really connected us knowing that we both have serving hearts. And I didn’t really know that getting to know him. I knew that he had a good heart and I could tell how good he was with his family, and that’s something that really meant a lot.”

Brian and Biniyam were married in June of 2016 with a traditional Ethiopian ceremony, food and attire. Here is a photo posted by Bria on Instagram at the time, which I am guessing is from the wedding: 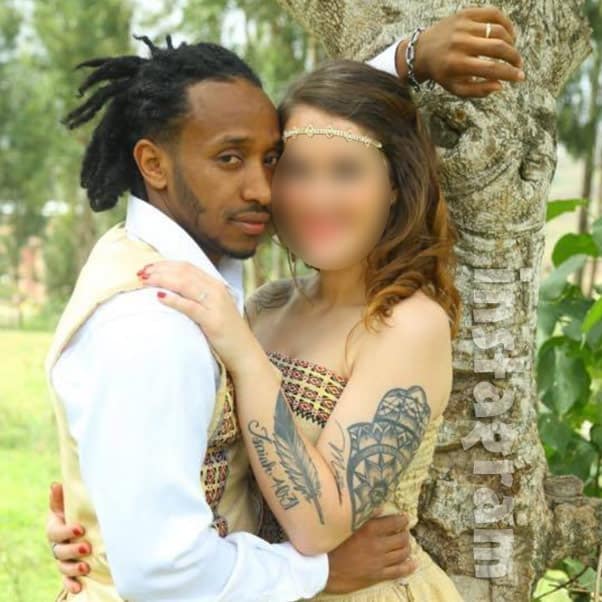 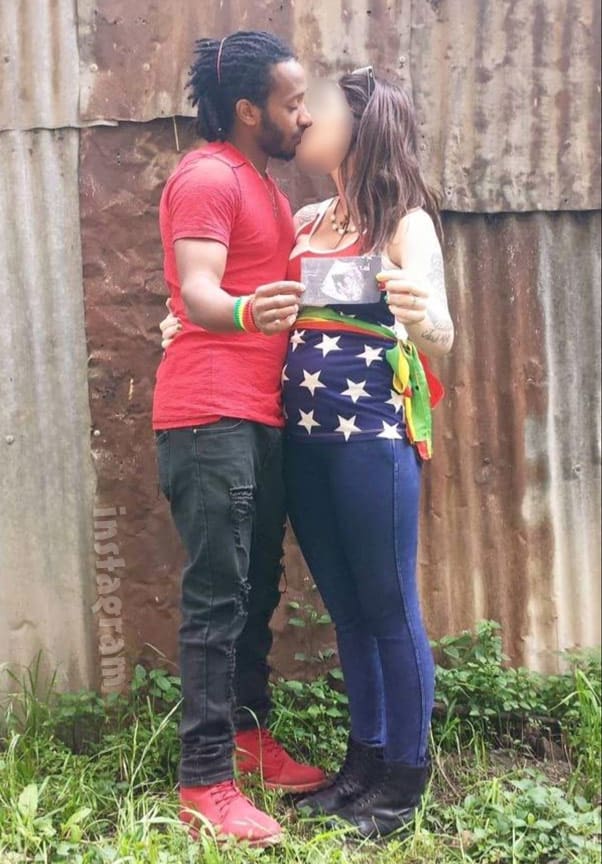 Pregnant Bria was returning to the United States in October of 2016 to attend her sister’s wedding, and the plan was to have Biniyam come along on a visitor’s visa and remain for the birth of their son. Unfortunately, her plan was derailed when his visa was denied.

As a result, Bria returned to the United States alone, with the intention of returning to Ethiopia to give birth. However, during a routine ultrasound, it was discovered that her unborn baby had the rare birth defect gastroschisis, meaning his intestines were growing outside of his body. Doctors were very adamant about Bria not flying back to Ethiopa after the diagnosis.

Bria’s mother reached out to a friend who was active in the local political arena, and they would eventually secure a letter from Iowa Senator Charles Grassley that Biniyam could use when he returned to the embassy to try again.

From The Hawk Eye:

“Any assistance in seeing that Mr. Biniyam’s application be given all due consideration within your guidelines for making such decisions would be appreciated,” the letter stated.

Biniyam Shibre was also given a letter from University of Iowa Hospitals and Clinics to take with him for his next appointment at the embassy.

The letters had very little impact as Biniyam was quickly denied yet again.

That’s when the office of U.S. Representative Dave Loebsack stepped in and started the process of getting Biniyam humanitarian parole. After a very complicated (and very rushed) process, Biniyam was granted humanitarian parole and was able to travel to Iowa in time for the birth of his son — which looks to have been in early February of 2017.

Binyam and Bria would later have an American wedding ceremony at a Christian church in New London in July of 2017. 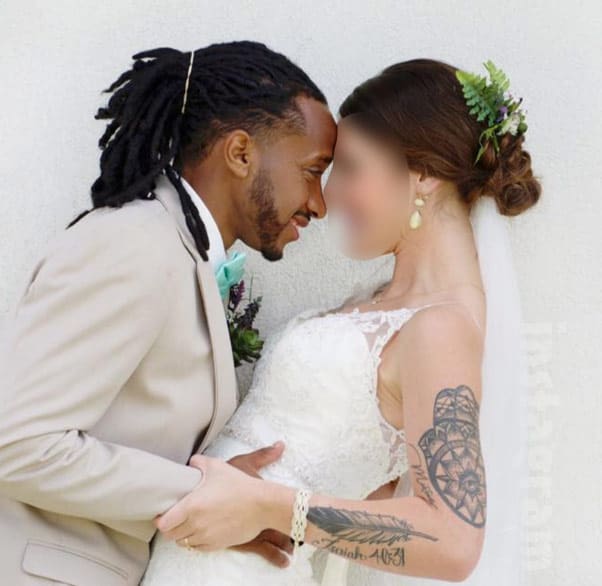 Apparently, Biniyam also seized the opportunity to participate in a MMA match in Cedar Rapids. Here’s a video of his bout:

Bria and Biniyam planned to return to Ethiopia together, but I’m not sure if that ever happened. Regardless, the two are DEFINITELY no longer together, as you probably assumed given that Biniyam will be on The Other Way with Ariela.

On March 15, Biniyam posted a photo of his son Simon on Instagram, along with this message:

A father never forgets his son. I will not give up. I love you Simon.

Biniyam’s post might have been in response to Bria, who posted a photo of her new fiance holding Simon on March 3 along with this caption:

A DAD isn’t defined as the man who makes the child, but rather the man who extends his hands and time to help with the child’s raising and his heart to love the child through anything. BLOOD doesn’t make you a DAD. Being a DAD comes from the HEART!?

It’s unclear how Biniyam’s previous marriage and child will be addressed on the show. Given that it isn’t mentioned at all in the couple’s bio, I am guessing viewers will see the trademark 90 Day Fiance “big secret” production tactic. I can already hear Biniyam telling the cameras: “There’s still something I haven’t told Ariela, and I’m worried that when she finds out, she’s going to leave me.”

I’ll be curious to find out if Biniyam’s previous marriage and trip to the United States via congressional intervention means that it is all but impossible for him to ever get another US visa of any kind. Perhaps that played a large part in Ariela’s decision to move to Ethiopia?

To find out how all of Biniyam’s marriage and parenting stories play out on screen, be sure to tune in to 90 Day Fiance: The Other Way Season 2, premiering Monday, June 1 at 9/8c on TLC!