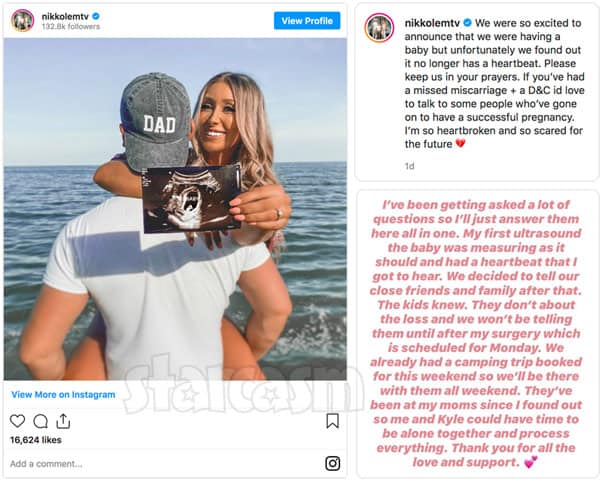 16 and Pregnant Season 4 mom Nikkole Paulun revealed on Instagram on Friday that she is currently pregnant, but she recently found out the baby no longer has a heartbeat. The painful announcement was made just three and a half weeks after she shared the joyful news that she was engaged.

Nikkole’s announcement accompanied a photo (above) that she planned to use to announce the pregnancy. Nikkole looks incredibly joyful in the photo as she shows off a sonogram while being held up by Kyle, who was sporting a “DAD” hat.

Here is Nikkole’s message that captioned the image:

We were so excited to announce that we were having a baby but unfortunately we found out it no longer has a heartbeat. Please keep us in your prayers. If you’ve had a missed miscarriage + a D&C id love to talk to some people who’ve gone on to have a successful pregnancy. I’m so heartbroken and so scared for the future 💔

For fear of the photo confusing some of her followers, Nikkole disabled comments on the post. “I turned off the commenting on the post because I knew people would see the photo and immediately comment ‘congrats’ before reading the caption,” Nikkole explained in her stories. “I just didn’t want to see that over & over again.”

Nikkole later shared an update in her Instagram stories thanking those who reached out to her with their stories and messages of support. She also provided some additional details:

I’ve been getting asked a lot of questions so I’ll just answer them here all in one. My first ultrasound the baby was measuring as it should and had a heartbeat that I got to hear. We decided to tell our close friends and family after that. The kids knew. They don’t about the loss and we won’t be telling them until after my surgery which is scheduled for Monday. We already had a camping trip booked for this weekend so we’ll be there with them all weekend. They’ve been at my moms since I found out so me and Kyle could have time to be alone together and process everything. Thank you for all the love and support. 💕

In addition to the questions and words of support, Nikkole was also recommended the book We Were Gonna Have a Baby, But We Had an Angel Instead to help her with explaining to her children what happened. “Someone recommended this book,” Nikkole wrote, along with a photo of the book’s Amazon listing, “and we decided to buy it to read it to the kids when we tell them what happened to the baby.”

Nikkole also revealed that she had the “SneakPeek” Analysis Report done and it indicated that her baby was a girl:

I had the sneak peek done between my healthy 8 week ultrasound and finding out the baby passed when I was 11.5 weeks. The baby only measured 9 weeks along so it had passed by the time I did the test. I haven’t been able to find any answers online but I do wonder if the results were accurate without the baby being alive.

Late last month, Nikkole announced on Instagram that she and Kyle were officially engaged with a photo of her engagement ring:

So excited to share that WE’RE ENGAGED!!! I can’t wait to marry Ky and spend forever with my best friend 💕

Our thoughts are with Nikkole, Kyle, and the rest of their family.

Unfortunately, Nikkole’s loss of her unborn baby brings up a very unfortunate time in her past. In February of 2013, Nikkole announced that she was pregnant with her second child. In August of 2013, Nikkole spoke with Radar Online exclusively to reveal that she lost her baby to miscarriage on July 27 when she was eight months pregnant. That interview came after Nikkole was photographed earlier in August wearing a bikini and clearly not pregnant.

After the Radar Online story was released, rumors began to swirl that Nikkole had staged the pregnancy and the miscarriage to make money from the story. (She did reportedly get paid for the Radar Online article.)

The allegations of faking her pregnancy were corroborated by Nikkole’s good friend for more than six years, Samantha-Jo Diggs. Samantha-Jo, who was also pregnant in 2013 and had just given birth to her daughter Charlee prior to Nikkole’s Radar story, did an interview with The Real Teen Mom Talk backing up Nikkole’s story. But, she later changed her mind and her story. From our previous post (which includes the full interview):

A few hours after the show, however, Sam contacted them again by writing, “This is Sam I talked to you earlier on the show can you please not post this and call me 73* *** **** I have to tell the truth about Nikkole. I can’t lie for her anymore.”

So, they interviewed Sam again, and this time she told a completely different story about how Nikkole had faked the entire pregnancy to make money, going so far as to Photoshop a sonogram and pregnancy photos, wear a fake baby bump, steal newborn baby and mother stuff from the hospital, research purchasing a tombstone at a cemetery and more.

Another of Nikkole’s friends also stated on Facebook that she saw the fake belly.

Nikkole was reportedly not allowed to address the rumors as she awaited payment from Radar Online. She was allowed to speak to them about it however, and that’s what she did.“Everything that I have said is completely true and the rumors are just mean,” Nikkole told Radar. “I just don’t understand how somebody that watched me go through all this can do this as a joke.”

Nikkole also released to Radar her three-page hospital bill, which shows she was charged more than $7,000 for blood work, labs, anesthesiology, a private room and medication. The date is listed as July 28, when Nikkole originally claimed to have suffered the stillbirth. It is also possible to make out Nikkole’s name at the top of the document, although many of the other details are blurred to protect her privacy.

Whether or not Nikkole faked her pregnancy and miscarriage has never been definitively determined. Either way, the story is tragic and saddening.

As stated above, our thoughts are with Nikkole, Kyle and their family right now. On a positive note, the engagement is wonderful news! Nikkole has had her fair share of chaos in her life,

. Kyle seems like a good guy to Nikkole and a loving father to the kids. We wish the whole family the best.