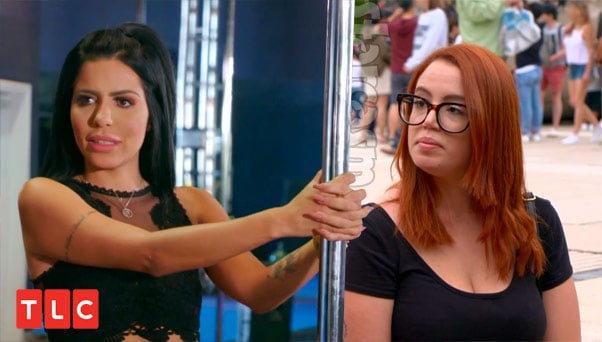 If you are a Brazilian woman who has slept with Colt Johnson, chances are that Sunday night’s new episode of 90 Day Fiance: Happily Ever After did not go well for you! Colt’s ex-wife Larissa dos Santos Lima and his Windy City namorada Jess Caroline took to Instagram after the episode aired to express their very different regrets.

“Canceling my cable tomorrow,” Larissa began her irate Instagram post. “I am shocked that I was given only 4 minutes of air time in tonight’s episode. Four minutes to someone who brought in high viewership on her seasons. Clearly, someone in editing doesn’t like me. Well, I will certainly not plug this show on my time again nor comment about!”

“As I am under contract, I will not give out spoilers,” Larissa continued, “but I’m so disappointed right now. All this work, all that filming. For what? Four minutes!!” 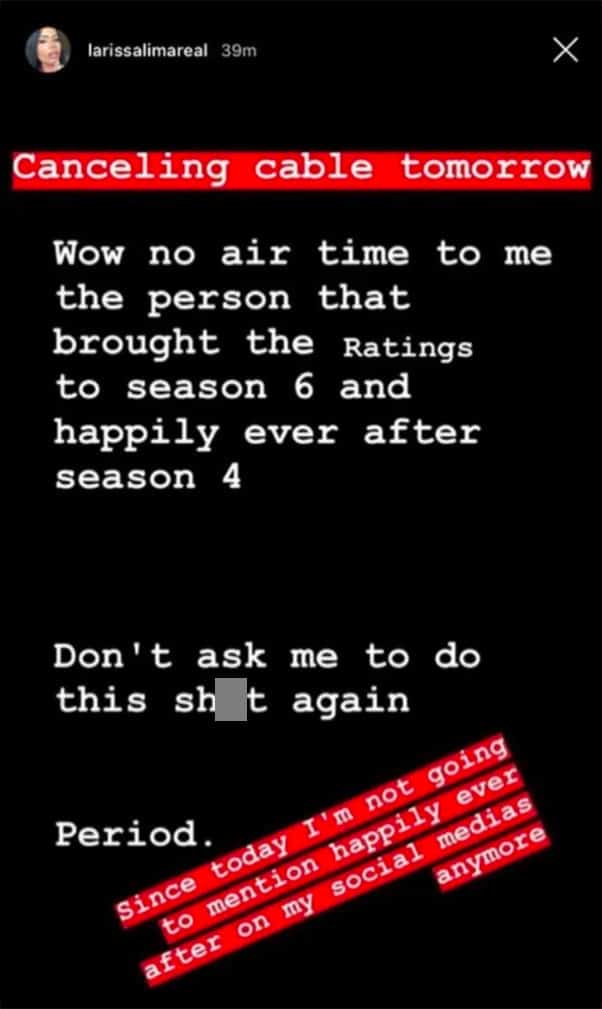 I did some fact checking and Larissa seems to have a valid point. The episode was just over 102 minutes without commercials, and Larissa had just one scene that lasted roughly three minutes and thirty seconds.

In the scene, Larissa and her gal pal Hannah take pole dancing lessons as Larissa ponders becoming a lesbian because it’s so hard to find a man to date. Hannah suggests a blind date and Larissa is open to the idea (after learning what a blind date is). This is clearly setting up a future scene in which Larissa goes on a blind date, but that will have to be on a later episode because Larissa was done after the pole dancing scene.

Meanwhile, Larissa’s ex Colt (or Colt 2.0) got LOTS of screen time with his new boo Jess! In addition to a morning after scene in their hotel room and some sight seeing in Chicago, there was also a six-and-a-half minute scene with Colt meeting some of Jess’s Braziliam lady friends at a bar. And then another four-minute scene with Colt and Jess arguing on their way back to the hotel.

You would think that Jess would be happy with all of her screen time, especially in contrast to Larissa. But, Jess’s extensive screen time on this episode and the premiere featured A LOT of dialogue, including numerous comments about how much Brazilian women love sex. For example, when Jess met Colt for the first time in person, she told him that Brazilian women like to have sex on the first date.

Jess talked a lot about sex in general, but it’s the comments regarding Brazilian women that caused some backlash online. In response to the backlash, Jess posted an apology on Instagram that was quite articulate:

Open letter to all Brazilian women:

Dear Brazilians, I want you to know that I read/listen to your messages. I would like to make a formal apology to all Brazilian women I offended with my generalized speech on the episodes. I recognize how problematic my statement was and by any means I meant to add to the already hipersexualized stereotype of the Brazilian woman around the world. I apologize for the way I expressed myself, I meant to give a personal opinion, on my amateur English I ended up generalizing and I see how jeopardizing that is. Unfortunately, I can’t go back on what was said, now I can only be transparent to all of you, say that I’m so sorry for all the baggage that this brings and that I’m holding myself accountable for what I said. Deconstruction of sexism is a daily task, and instead of taking this as a loss, I’m taking it as a learning opportunity. Therefore, I have my messages open so we can talk about this, I hope to learn more and listen to what you have to say.

The first half of next week’s episode is currently available on TLC.com, and I scouted ahead to see if Larissa’s screen time woes are going to continue. Out of 47 minutes, Colt and Jess have one scene that is roughly five minutes. Larissa also has one scene (yes, it’s a blind date) that lasts right around seven minutes. So she’s in the screen time lead halfway through! Perhaps she will uncancel her cable?

UPDATE – Larissa also watched the preview and she appears to have completely changed her tune! Here’s the clip she shared along with her caption:

Breaking News: I was wrong! 😅

I received the preview for next week’s episode, and I know now, that I overreacted and spoke too soon. Yessss, I know, it’s hard to believe I could be so impulsive. 🙊

I am so happy to see what will be shown next week, as I really want you guys to see my journey, my life, and I can only do this through the show as I am under contract. I’m unable to be too vocal on my social media right now.

Thank you, to all of you that understood this.

So, this is the main reason I do not post very much on my social media. The show is airing, and I cannot divulge information not shown. And yes, I WILL be showing more of myself, my family, and all other aspects of my life on my YouTube channel after the season has aired. Until then, I must be 🙊. #90dayfiance #90dayfiancehappilyeverafter