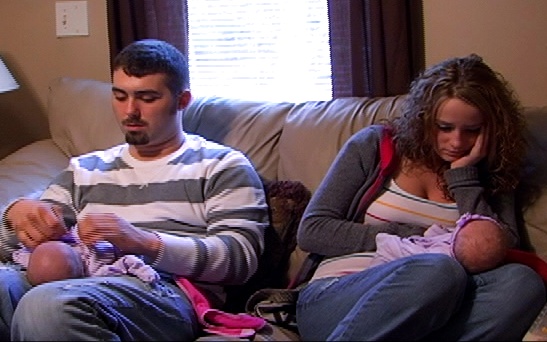 UPDATE: Leah and Corey were married October 17, 2010, and will be featured on Teen Mom 2
UPDATE: On the reunion special for Season 2 16 & Pregnant both Leah and Corey expressed the desire to eventually get back together. In fact, there was a moment when they smiled at each other while talking to Dr. Drew and a literal spark flew. Below is video of the After-Show episode where they discuss the future:

Leah Messer, the latest subject of MTV’s 16 & Pregnant, became pregnant with twins at 17 after a sexual encounter with her prom date in his truck. She’d only known her prom date, 19-year-old Corey Simms, for about a month. Remember this truck, because it comes back later.

All that sounds really tough, but here’s when things really start to get tricky after the birth of the premature birth of the twins, Aliannah and Aleeah, and they try to settle down as a family. Even though Leah didn’t know Corey that well, and she still had feelings for her ex boyfriend named Robbie, Corey comes off as a really, really good boy who’s extremely mature for his age and does everything to provide for and take care of his two new children. Despite the fact that they were nearly strangers when they became parents, the more Corey got to know Leah, the more he liked her and wanted their new family to work.

He even sold his beloved truck, which was the one thing he really cared about in this cruel, crazy world, to help provide for his children. Corey seemed a bit jealous about Leah going out with her friends and her ex boyfriend, Robbie, but not because he was coo-coo and crazy, there was actually a reason for Corey to be jealous.

While on camera, Leah flirted with Robbie and in voice-overs wistfully imaged running off into the sunset with him. Robbie didn’t seem too excited to take about Leah’s twins, and when confronted with them, flinched at the idea of changing a diaper, something Corey did without question in between working his two jobs to pay for the substantial cost of those diapers.

When you’re 17 years old, even having twin babies too take care of cannot overcome the senseless draw of infatuation. Leah breaks up with Corey so she can pursue that beat her heart skips when Robbie flashes his nicotine stained teeth in her direction. It only takes a few days after Leah’s chosen Robbie over Corey to realize that Robbie really has nothing to offer her, and Corey has everything to offer her in this situation. But it’s over, the betrayal in done.

The night they broke up MTV’s cameras caught Corey explaining to her that she is all he wants, to wake up to, snuggle with, etc. Leah cried, looked out the window, and thought of Robbie. It’s a classic storyline that usually doesn’t emerge so clearly and heart-wrenchingly on these 16 & Pregnant episodes.

In her 17-minute After Show update with MTV’s SuChin Pak, Leah admits that she still loves Robbie, but doesn’t speak with him and still wishes she could work things out with Corey because he’s such a good father. The teenager’s feverish heart has been over-ruled by the mother of twin girls inside of her, but is it too late?

What do you think, will these too end up together?