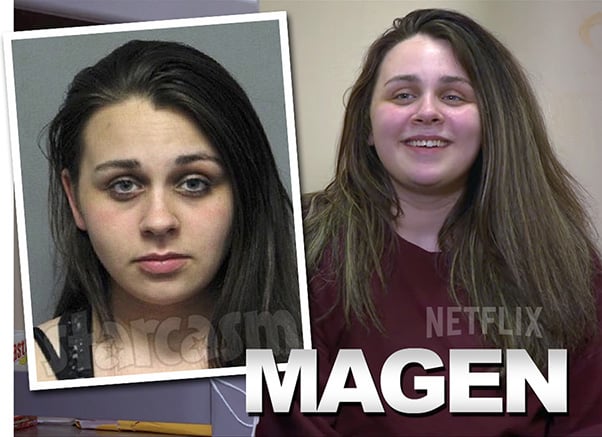 The popular Netflix prison reality series Jailbirds documents the lives of inmates incarcerated in county or parish jail. Given that the setting for the show is a jail as opposed to a state or federal prison, most of the prisoners featured are not behind bars due to serious charges that would result in a lengthy prison sentence. However, some of those featured on the show are in jail awaiting trial for very serious charges.

That is the case with Jailbirds New Orleans prisoner Magen Hall, who is serving time at Orleans Parish Jail while she awaits trial on charges of second degree murder, armed robbery, and obstruction of justice.

Magen Hall was arrested on March 3, 2019 in connection with the February 28 stabbing death of of a 62-year-old business man vacationing in New Orleans. A housekeeper at the Empress Hotel in Treme found the body of Patrick Murphy just before noon on February 28 in a room that was registered to Magen Hall. Murphy, who was the owner of a chain of Murphy Jewelers stores, died from two stab wounds to the abdomen and one to the neck.

Detectives were able to obtain hotel surveillance camera footage that showed the victim arriving at the hotel with a white female at approximately 2:10 AM on February 28. The white female rented the room with a Tennessee ID under the name “Megan Hall.”

The woman and the victim were seen entering Room 110. “At approximately 3:42 AM, the female subject was observed exiting the hotel room alone and briskly walking out the front door of the Empress Hotel,” the court documents read. The surveillance camera footage showed no one else entering or leaving the room prior to the housekeeper discovering the victim’s body at approximately 11:41 AM.

Additional information from the arrest warrant issued for Magen Hall:

Detective Guidry interviewed two known witness[es] who were inside Empress Hotel Room [redacted] the evening of February 28, 2019. The witnesses informed Detective Guidry they heard a male and female arguing very loudly inside room number 110 at approximately 3:30 AM. The witnesses stated they heard the subjects struggling inside the room, and the female yelled, “Get in the bathroom.” The witnesses stated the struggle lasted approximately two minutes, at which time they ceased to hear commotion coming from room 110.

Investigators discovered that Magen had multiple arrests for prostitution in multiple states. (It should be noted that her name is often spelled “Megan.” I even found one instance where it was spelled “Megen.”)

Magen, accompanied by her attorney, turned herself in on March 3. Her bail was set at $750,000. “We look forward to airing everything out in a public forum,” her attorney, John Fuller, said at the time. “There is definitely more to the story than what’s confined to the four corners of the application for an arrest warrant.”

“I came with two of my friend girls from Memphis, and we were just down here for Mardi Gras,” Magen explains on Jailbirds New Orleans. “You know, we were out drinking, just having fun and supposed to be partying, and then just one thing led to another, and a situation occurred.”

#JailbirdsNewOrleans Julie Raffray was charged with 2nd-degree murder after a man she sold drugs to overdosed. The man who died turned out to be an FBI informant. And the dealer Julie was selling for was a DEA informant! Plus, an update on Julie's case. https://t.co/HWdIOZ6oqN

Magen Hall has been incarcerated in the Orleans Parish Jail since her arrest on March 3 of 2019. That is more than two-and-a-half years (total of 937 days) that she has already served. Why has it taken so long for Magen Hall to go to trial?

There have been multiple delays in Magen’s murder trial for multiple reasons.

Magen’s trial was scheduled for October 8, 2019 but was delayed after a joint continuance motion was filed by the prosecution and defense.

The trial was re-scheduled for January 7, 2020 but was delayed again after another joint continuance motion was filed by the prosecution and defense.

The joint continuance motion was approved again, and the trial was re-scheduled for March 23, 2020. It was soon bumped back to April 20. (It’s unclear what the reason was for this four-week delay.)

The April 20, 2020 trial date was delayed indefinitely due to the coronavirus pandemic. The trial remained on hold until a court hearing in April of this year, during which a new trial date was set for September 27, 2021.

There was a pre-trial conference scheduled earlier this week, during which the September 27 trial date was vacated due to court delays and other issues stemming from the damage caused by Hurricane Ida.

There is currently no new trial date scheduled. The next court date in the case is another pre-trial conference on October 6.

Jailbirds New Orleans is currently available to stream on Netflix.

Click here for information on the arrest and current status of Magen’s Jailbirds New Orleans co-star, Harley Himber! (Link in the tweet below as well.)

#JailbirdsNewOrleans UPDATE: Is Harley Himber back in jail? PLUS, details on her CRAZY arrest after lying about being a secret service agent, attempting to kidnap a boy and his mom, chasing then crashing into them multiple times.. and naked rock throwing?! https://t.co/4EQAk0zCCb pic.twitter.com/QigEpLtKyS

Why are there only 3 episodes of Jailbirds New Orleans on Netflix?