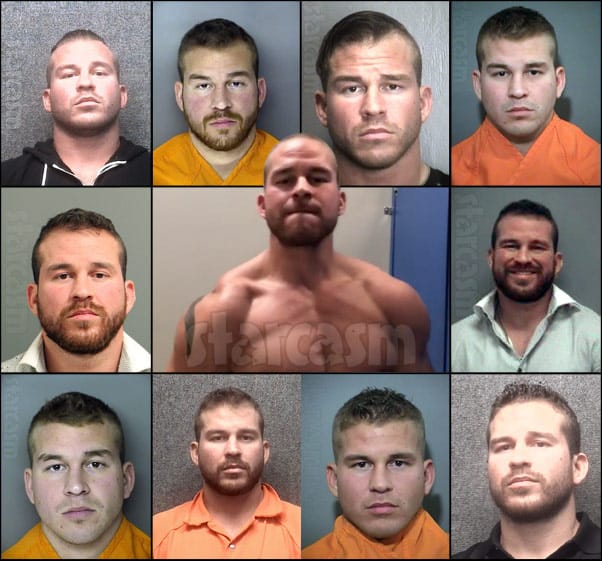 If you’re curious what former Teen Mom 2 dad Nathan Griffith does all day besides working out at the gym, the answer appears to be going on philosophical rants on social media and allegedly stalking and threatening young women that live near him.

Nathan and his long-time girlfriend Ashley Lanhardt were in court in Florida earlier today in regards to a restraining order that was filed against Nathan by another woman on July 2. According to The Sun, the woman who filed the restraining order says that she first met Nathan at a local lounge in August of 2018, but the “unwanted, unwelcome contact” began in March of this year.

In addition to allegedly sending the woman unwanted messages via social media, Nathan would also reportedly show up at her home! She says that there was an incident in April in which she told Nathan not to come over three times, but he showed up anyways. She called police to report him for trespassing, and they advised her to file a restraining order.

The filing contains numerous alleged text messages from Nathan, including his insistence on coming over to her residence a second time despite her telling him not to. Nathan tells her that he is “already on my way,” and she responds by pleading: “No don’t come over tonight let me sleep.”

“Nope,” Nathan replied in the texts. “Pulling my crazy care.” Nathan then corrected himself by clarifying “card” instead of “care.”

In another text exchange, Nathan tells the woman to “watch your 6.”

The woman contacted police, this time citing harassment. She was instructed once again to file a restraining order. So, that’s what she did.

The temporary restraining order was submitted and approved on July 2. Earlier today, the order went before a judge and it was extended for a full year.

According to online records, the woman is 26 years old and her most recent address is within 25 blocks of Nathan’s home.

Are you the hunted or the hunter? Be the predator, the wolf that stands out from the sheep. Ready and waiting to feed on its prey. Be the beast inside you. Cause when you do anything in life: a job, a run, working out or anything… the moment you don’t act hungry, someone else is going to chew you up and spit you out. Give 100% in everything you do. Be a force to be reckon with. #flexfriday #gainz #bodybuilding #positivevibes #fitlife #bro #lifestyle #getbig #happyfriday

The woman alleged in the petition: “He has threatened that if I ‘keep denying him’ that ‘by the time he was done with me I would be unrecognizable.’

“Another threat he made to me over Snapchat was to ‘sleep with my eyes open.’”

She continued to claim: “He has shown a pattern of harassment via social media and text which he then follows up by arriving at my residence where he is unwanted, drunk, belligerent and verbally abusive.

“I am afraid for my safety and that of my child’s. I am afraid that he will act on all of his previous threats.

“I am asking for help protecting myself and my family.”

Neither Nathan nor his girlfriend Ashley have posted anything publicly on social media about the restraining order or the allegations.

Speaking of Nathan posting publicly on social media, he recently took to Instagram to educate all of us on economics and politics. Here’s an excerpt video shared by Teen Mom Shade Room (who was also the first to break the story about the order of protection against Nathan), followed by a transcript and a new page from The Book of Nate:

I cannot — even when it comes to money — I cannot agree with democrats because I do not believe in strengthening the middle class. There are other ways to do that than taking more money from rich people, making them pay more taxes, you know, and then having people who make less money because they choose to make less money — because, you know, it is America, you can do anything you want to. It is the land of the free and there are many opportunities out there — and, you know, make them pay less taxes.

This is why I don’t talk about politics, because it makes me frustrated. But I felt the need that might help educate some people — the difference, you know, between, you know, the branches and, you know, government power, and democrats and republicans. 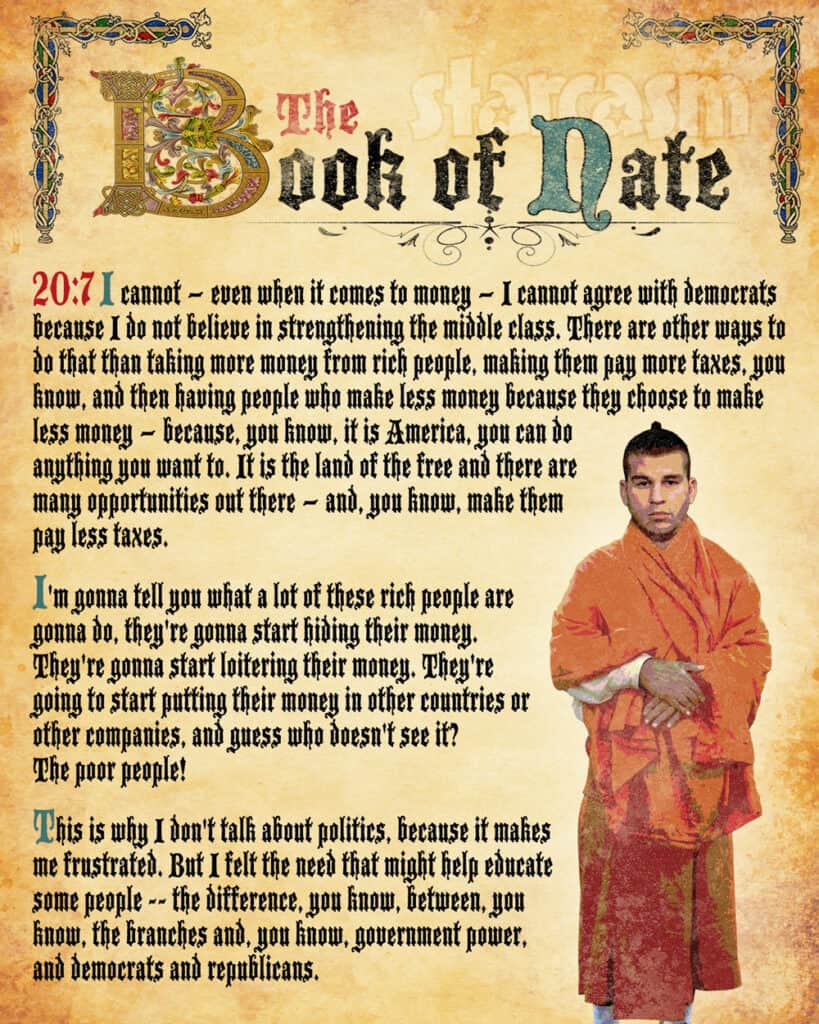 UPDATE – A little more from the recent addition to The Book of Nate from reddit:

Nathan on ‘Themcrats’ and how the ‘middle class’ doesn’t need to be strengthened! I had the mic on so sorry if you hear me laugh! from r/TeenMomOGandTeenMom2