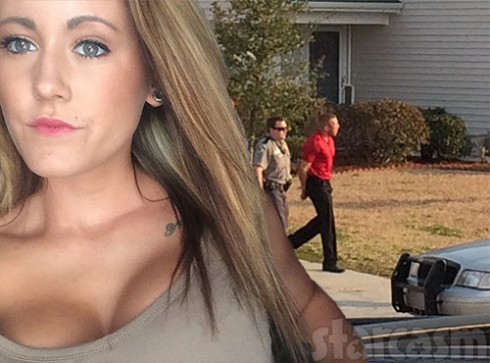 Following his arrest for an argument with Teen Mom 2‘s Jenelle Evans on Wednesday, Nathan Griffith is out of jail. According to the Horry County Sheriff’s Department, Nathan was given a $1,000 bond on Thursday for his criminal domestic violence charge. He paid up and was released shortly after 5 p.m.

As for what’s next, much of it depends on sorting out what actually happened: In the police report, Jenelle claimed Nathan pinned her against a toilet and forcibly took her engagement ring off her hand, which cut her finger. However, he disputed the story to police and said he “never touched her.”

Now adding to the uncertainty is Nathan and Jenelle’s neighbor, local meteorologist James Hopkins, who witnessed the arrest.

“So ‘Teen Mom’ star’s fiancé was arrested yesterday,” he posted on Instagram. “I took this pic while my daughter was out riding her bike. They’re my neighbors but probably not for long. #teenmom2 #drama #staged”

He elaborated to Radar Online that he overheard Nathan’s protestations when he was getting walked to the police car.

Another source close to the couple told Radar that the fight began when Jenelle found out Nathan had been seeing another girl, but she refused to return her engagement ring.

“The MTV camera crew was outside the house, because when Jenelle arrived, Nathan locked the door behind her and shut off her microphone,” the insider said, explaining Jenelle pocket-dialed a crew member once she was inside the house. “Jenelle was screaming ‘Get off of me, get off, get off,’ but they couldn’t do anything, because they door was locked. That is when someone from MTV and one of her neighbors called the police.”

On Thursday, Jenelle issued a statement via her new PR Twitter page.

Jenelle is focusing on her children and school work right now! She appreciates all the support from her fans!

She also got into a small Twitter battle with Teen Mom 3‘s Katie Yeager. That seemed to start with a tweet from Katie: “It’s girls who play the victim that make us actual victims look like crazy liars.”

Although she didn’t include Jenelle’s name, Jenelle responded to defend herself.

Despite claiming she wasn’t behind the arrest, it seems Jenelle and Nathan are done (for now). This morning, Jenelle asked the mother of Nathan’s daughter how she can get Easter treats to them and then indicated she’s “going on a vacay… sooner than I expected.” Nathan also returned to Twitter to thank a friend who “took me to the gym, gave me shelter and made me a bed.”