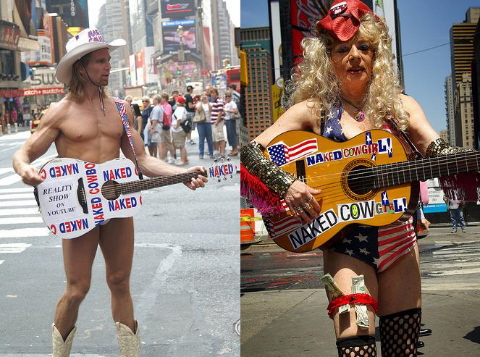 It’s an Empire State Times Square whitey-tighty throw down for the legendary Naked Cowboy and his nemesis Naked Cowgirl.  The attireless geetar strummer, whose real name is Robert Burck, has filed a cease-and-desist letter to the female copy-catting Naked Cowgirl, real name Sandy Kane.  In the letter Burck stated:

“Your use of Naked Cowgirl is essentially identical to the Naked Cowboy and is clearly in violation of Burck’s trademark.”

Furthermore, Burck is demanding that Kane, who started popping up on The Naked Cowboy’s Time Square turf in a red, white, and blue cowboy hat and matching bikini, either quit her act that is making money off of his trademark or sign a “Naked Cowboy Franchise Agreement.”  Before you snicker there is another Naked Cowgirl, Louisa Holmlund, who has gone through the appropriate channels to become a Naked franchisee.

In true Country fashion the two, much like George Jones and Tammy Wynette, had a good relationship and even discussed the possibility of recording a duet.  The deal fell through and Kane retaliated by recording the song called “The Cowboy” with another male counterpart.  The following is a little clip of The Nakeds during happier days doin ’em up one purty together.

There is no word yet as to when and if this will progress to Naked Court but I do know that storms never last so I feel good about a future Naked Cowfolks reconciliation.