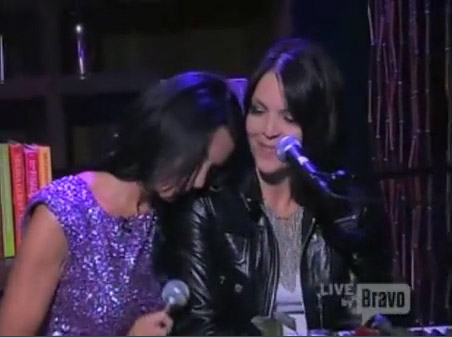 Perhaps sensing that she might not be asked to return for the third season of The Real Housewives of New Jersey, cast outcast Danielle Staub has been frantically busy trying to drum up publicity for herself using whatever means necessary.

The divorced mother of two, who has had quite a controversial past that includes being arrested for felony kidnapping, drug trafficking and extortion back in the mid-1980s, has authored a memoir (The Naked Truth), starred in a homemade sex tape, associated herself with convicted felon Danny Provenzano (whose uncle was rumored to be connected to offing Jimmy Hoffa) and launched a music career with the single “Real Close.”

June 21, she was physically very intimate with her duet partner. (You can see the entire song HERE) Andy Cohen asked her immediately after the performance, “Now are the two of you together?” to which Danielle coyly replied, “we’re not saying anything other than ‘we were together during the song Real Close,'” at which point she leans over and appears to imitate giving Michaels a kiss.

During this latter part of the interview, Danielle is sitting on Lori Michael’s lap and stroking her hair:

I have no earthly idea if Danielle Staub is gay or bisexual or what, but I do feel confident in saying that she is intentionally doing things to suggest that she is. She even referred to Michaels as her girlfriend (or “gf”) in this tweet from earlier today:

So for the second time today (and only the second time ever) I must give Danielle props! The first time was for her surprisingly pleasant singing abilities and this one is for taking a chapter right out of Heidi and Spencer’s book How to Be Famous: Our Guide to Looking the Part, Playing the Press, and Becoming a Tabloid Fixture.

There isn’t a listing yet for Danielle’s single – I will try to stay on top of it and add one as soon as it appears!

Did financial problems cause Joe and Melissa Gorga to sell their $3.8 million mansion?