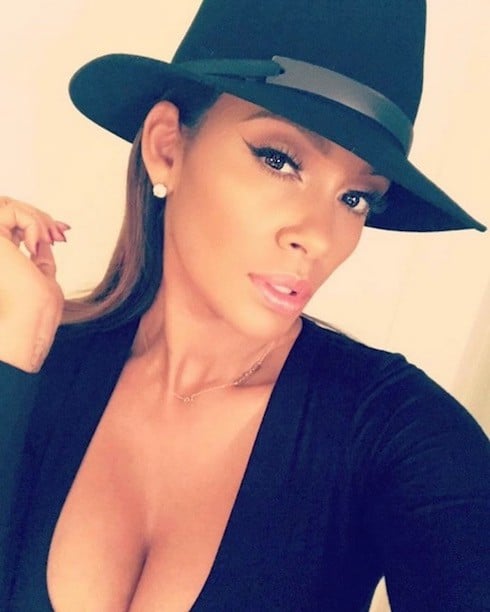 It seems like Jackie Christie and Evelyn Lozada are responsible for almost every feud on Basketball Wives this season, so it’s unsurprising that two of the cast’s biggest names would also square off against each other. However, judging by the comments on social media, a fair percentage of the show’s fans are a bit confused about the rift, considering that they’d never been a part of the same cast before. (Jackie and Malaysia Pargo are the two OG cast members from Basketball Wives LA; Evelyn left the original Basketball Wives when the show went on hiatus in 2013.)

Thanks to a just-released bonus scene from the first episode of Basketball Wives Season 6, we have a little more information about the growing rift between Jackie Christie and Evelyn Lozada–though the explanation comes from Jackie’s side of things. According to her, it all goes back to last October, when Jackie’s semi-estranged daughter Takari revealed that her son Jaxson had been badly burned in an accident at daycare. Jackie didn’t contribute to the GoFundMe account that Takari set up to help pay Jaxson’s medical bills; at the time, she said she would give Takari money “if my daughter asked for it.”

But Evelyn Lozada *did* contribute–in fact, she gave $3,000, the full amount that Takari had been asking for. And that, in Jackie’s eyes, was a bridge way too far–something she makes very clear to her other daughter Chantel while the two are out house hunting:

It sounds like Jackie would have been more or less equally upset if anyone affiliated with the Basketball Wives cast had offered Takari any assistance at all. Whether or not Evelyn did it to provoke Jackie is another story–and one that we’ll doubtless see unfold over the rest of the season. It’s worth pointing out, though, that Jackie’s official Basketball Wives bio suggests a very dark conclusion to her story this season: “Evelyn Lozada’s arrival in LA,” we’re told, “causes a chain reaction that leaves Jackie’s world crumbled and even her oldest friendships in question.”

One other thing that’s worth pointing out: Takari is working on a tell-all memoir about her life under Jackie’s thumb. Based on the excerpts she’s released so far, it doesn’t sound like the finished product will treat Jackie kindly. No word yet on whether Takari’s memoir will feature during Basketball Wives Season 6, but, given that producers are still filming, it’s a possibility.