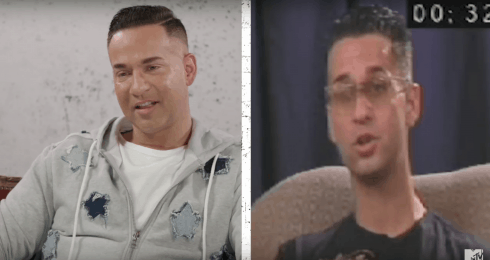 Jersey Shore: Family Vacation premiered tonight at 8/7c on MTV and how the cast (sans Sammi) are dealing with a different set of problems then “smashing grenades” and getting alcohol poisoning; things like impending fatherhood and jail for tax evasion.

All the cast members look and act a little different. For one, they all seem to no longer have such thick New Jersey accents and intense tans. Some of them have also had a little plastic surgery and injectables to slow the march of time.

Has The Situation had work done?

Michael “The Situation” Sorrentino’s face looks noticeably different now, (on the left above) while reacting to his audition tape than it did when he was first on the show. Dr. John Paul Tutela spilled the beans to Page Six about The Situation’s $800 Botox refresher before he headed down to Miami for the reunion show. He said he also has The Situation and his girlfriend Lauren Pesce on an “aggressive skin care regimen.” The Situation also appears to have had his eyebrows waxed differently, which could contribute to his changed look.

Nicole “Snooki” Polizzi is also a repeat patient of Dr. Tutela. She regularly gets injections and got a refresher as well for the show. Dr. Tutela also gave her a “mommy” breast augmentation after the birth of her children, ages 3 and 5. Although they share a plastic surgeon and skin are doctor, The Situation revealed on an online video extra for the show that he’s just made up with Snooki after not speaking to her for five years.

In the past The Situation dealt with substance abuse, violence, and relationship drama, but now that he’s more stable he still has the effects of his past actions looming over him. Most notable is his pending tax evasion case. He’s now 28-months sober from a serious opioid addiction and is facing up to 5 years in prison and a $250,00 fine. He’s pled guilty to charges stemming from 2011 and will be sentenced April 25, 2018.

His cast mates are rooting for a light sentencing for The Situation, as they feel he’s a changed person. “I’m hoping for positive results for him,” Snooki said in a recent interview. “And he survived a house with us raging lunatics sober and so positive, so god forbid he goes, jail should be a breeze.”

The Situation told US Weekly that while he’s scared about the sentencing, he’s trying to stay positive and take each day as it comes. “I worked so hard on myself the past couple years to turn a negative situation into a positive one,” he says. “So I feel that when that day comes, I’ll be ready for it.”

Angelina Pivarnick is an EMT now