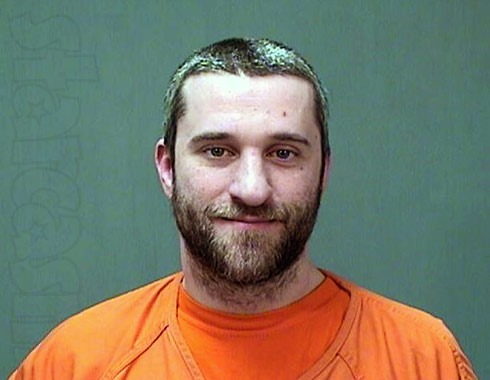 Saved by the Bell actor Dustin Diamond, who played Screech on the popular sitcom, was arrested early this morning after an alleged bar altercation involving his girlfriend.

The 37-year-old is facing a first-degree felony charge of recklessly endangering safety as well as misdemeanor charges of carrying a concealed weapon and possession of a switchblade knife.

The incident occurred at a bar in Port Washington, Wisconsin, but Diamond and his girlfriend Amanda were reportedly arrested later at their home. According to Gossip Cop, Dustin and Amanda were being antagonized at the bar by another couple when “Amanda punched the unidentified female bar patron.” Dustin then came to her defense by apparently pulling a switchblade knife (judging from the charges).

Amanda was reportedly charged with disorderly conduct and released, but Dustin remains behind bars with bail set at $1,000 and a court date scheduled for this afternoon.

According to the Port Washington Police Department, officers responded to the Grand Avenue Saloon around 11:15 p.m. Thursday, December 25th for reports of a stabbing. Evidence gathered at the scene indicates that Diamond had stabbed another male patron and left the bar in a white SUV with his 27-year-old girlfriend. Officers quickly located the suspect vehicle and both were taken into custody.

The knife was recovered in Diamond’s vehicle.

UPDATE – TMZ has since confirmed the report that the arrest was after an altercation with another couple at a bar, and they even have a video of Dustin and Amanda at the bar in which a woman can be heard saying, “he has a f**king knife.”