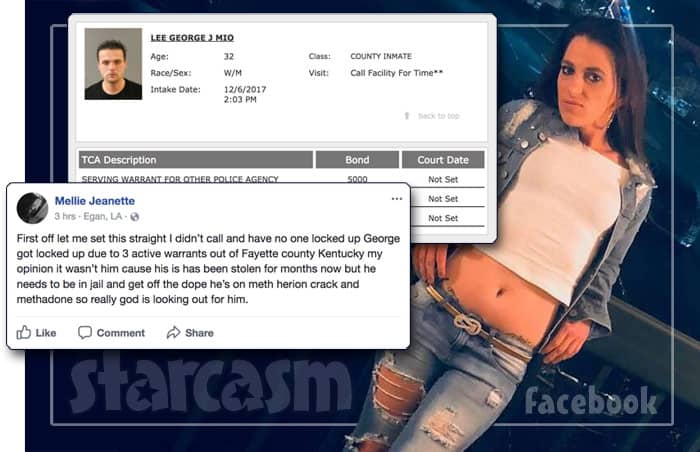 Former Gypsy Sisters star Mellie Stanley and estranged husband George Lee Jr. had a very acrimonious split less than two weeks ago, and now there is more bad news for George as he is currently behind bars after being served on multiple outstanding warrants. George was arrested earlier today in Kentucky and is currently in Warren County Regional Jail.

The news broke on Facebook with a rather strange post from George’s mother. “George is free from Mellie Stanley at last,” she wrote. “She had him violated and he is going back to prison. His mother is happy at last that George is free from her for about 3 years.”

Mellie responded by posting the following on her Facebook page:

First off let me set this straight I didn’t call and have no one locked up George got locked up due to 3 active warrants out of Fayette county Kentucky my opinion it wasn’t him cause his is has been stolen for months now but he needs to be in jail and get off the dope he’s on meth herion crack and methadone so really god is looking out for him.

A screen cap of George’s mother’s post was shared on the Gypsy Gossip: Tattle Tales Facebook page, and things got a bit heated between Mellie, George’s mother, Mellie’s mother Lottie, and another woman that is somehow connected to the two families. And when I say “a bit heated,” I mean that in a HOLY HELL WTF?! Gypsy Sisters kind of way:

LOTTIE (to George’s mother): Your son beat my child just like he held her down whil u hit her she couldn’t have a life with because of u trying to play the wife part now what will u do

GEORGE’S MOTHER: Yeah well mellie is going around telling her brother willy molested her and your husband molested her too so is mellie lying or not? This all came from your precious daughter mellie. lottie you was never no mother and that you was scamming the state and done 10 years and she was always in foster homes we can go on on i dont care.

WOMAN: [Mellie] was a baby and if she trusted u telling u that it should not be spoke of that is sick to bring up such a thing !!!

GEORGE’S MOTHER (to WOMAN): She told us about you too how you was the biggest wh0re in west virginia should i keep this confidential so keep taking up for her.

MELLIE: Lol [WOMAN] I never said 2 words about u why would there be a conversation. About u and it’s a funny thing George just called me and asked me to put money on his account and he said he wanted it for my number because he’s sick of his family trying to interfere with his life and they are the reason we always argued I don’t want George but baby he’s dying for this c*nt back

MELLIE (with a screen shot of George’s mug shot photo): Can we say DOPE HEAD it’s a plain to see situation how f**ked up he is

GEORGE’S MOTHER: Man that is a handome fella right there yall must like that picture to put it on here. Eat your heart out women yall cant have him. Hes the famous gypsy. I gotta let you go now i gotta put money on his account and on the phone to call his mother. It isnt his first time in there theres more handsome pictures where that came from.

GEORGE’S MOTHER: [Mellie] its the other way around your mother was causing trouble while you was with george in kentucky because you would tell me how you want your mother to quit interfering in your relationship. You wanted george while he was putting it to someone else and you know who it was. You talk about your own brothers and sisters i dont know [woman] so how would i know. Tata now go get pat baby.

It’s hard to know who to believe in this debate, but I can confirm that George’s mom is correct about it not being George’s first time behind bars. I will let you decide if these are “more handsome pictures” or not:

Mellie and George share a daughter together, one-year-old Divinty Rose. The couple had some previous difficulties, but reunited earlier this year before getting married in a small ceremony in Kentucky in May. The marriage is Mellie’s fifth.

UPDATE – Mellie was arrested in Louisiana within hours of George’s arrest!