Sony’s decision to pull The Interview from theaters and to avoid (for now) a home video or streaming release means the studio is going to take a major financial hit. And, since hackers have released scads of e-mails related to the film, we know exactly how much it cost to make and market–which is notable, since Hollywood tends to keep its figures secret and its accounting methods as shady as possible. So, the question arises: How much money is Sony going to lose over The Interview debacle?

The Rogen-Franco movie had a production budget of $45 million. But, as we all know, the money doesn’t stop there. The Interview also had a North American marketing budget of about $35 million. In addition, Sony was shelling out approximately $10 million for international marketing. Which amounts to $90,000,000–ninety million dollars–all in. About $5 million in domestic advertising can be recouped, since Sony’s pulled the movie from distribution, but that still leaves the studio holding an $85 million dollar bag.

And, since Sony has decided to forgo Video-on-Demand service–again, for now–forecasters say that’s at least another $10 million in foregone returns. (Recent movies like Snowpiercer and Margin Call made about that in VOD, though at least one executive said he thought The Interview, with its attendant controversy, could bring in twice as much.) 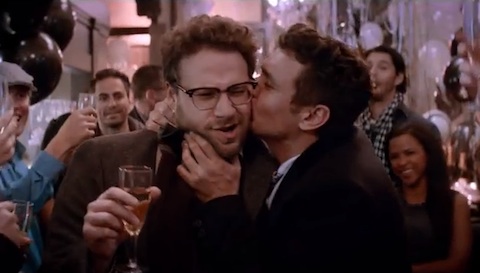 Eighty-five million dollars is at least enough money for a Scrooge McDuck bath, and possibly enough for two. But the value of the damage to Sony’s reputation is the more costly figure, and it’s nigh-incalculable in the short-term. In addition to all that beautiful money, Sony execs–the ones who don’t lose their jobs for sending racist notes to each other–will have to spend time apologizing to and coddling all the stars they insulted when their e-mail exchanges were made public.

And, as Forbes points out, there are other ways to measure the cancellation’s impact: the value of Sony’s stock has dropped by 7% since the Sony Hack Attack began two weeks ago. If you’re in the mood to buy long this Christmas season, Sony’s probably a good bet. Get your family some stock while the gettin’s cheap.

What do you, the viewers at home, think? Are you interested to check the movie out, when Sony finally does release it in some form, if only to see what all the fuss is about? Or will you have moved on, to brighter, more interesting realms of thought?

James Franco denies sleeping with Lindsay Lohan, calls her out as a liar

Why is James Franco bald?