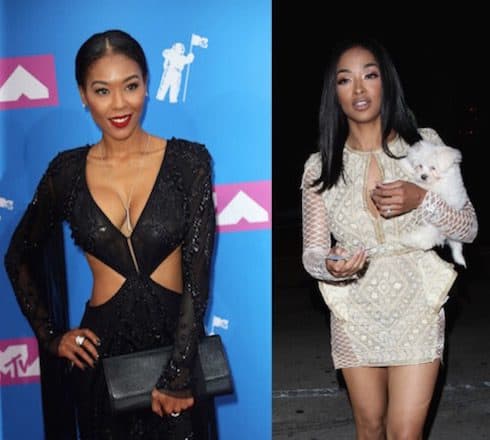 They’ve been beefing for over a year now, and things recently got violent when security had to separate them on the Love & Hip Hop Hollywood set. Fighting between LHHH cast members is hardly unprecedented — but why exactly do Moniece Slaughter and Princess Love hate each other so much? Though the details remain somewhat murky, new information has come to light in the wake of their latest altercation.

First off, recall that Moniece threw a chair at then-pregnant Princess Love during the LHHH Season 5 premiere. Last week, while filming end-of-season scenes for the show, Moniece Slaughter and Princess Love apparently got into some kind of a tussle.

We say “some kind” because both women have shared pretty different sides of the same story. The only thing that seems to be absolutely clear is that their bad blood continues to spill over, and that both Princess and Moniece (who, you’ll remember, has some experience brawling with cast mates) appeared to want to take things outside, where security would hypothetically be less likely to intervene.

Atlanta Black Star reports that Princess started this round of their fight after she “threw her shoes, ‘champagne flutes of apple cider,’ and a rock” at Moniece. The rock actually hit Moniece, security stepped in, and the two women stepped outside. But security intervened once more, and the fight went to social media.

Here’s where the stories diverge. Princess claims she was ready to brawl, but that Moniece chickened out. “I told this weirdo to meet me after the scene,” Princess wrote, “and she takes her sneakers off and runs through dirt in her socks right into securities arms.” The Shade Room got the screengrab:

Somebody put these two in the boxing ring ? via: @thelhhtea

But that’s not what Moniece says happened. According to her, she “came prepared” for a throwdown after the scene as Princess requested, but Princess “hid out” in her car and then fled the scene, still without shoes.

Here’s a shot of Moniece’s bandaged hand, as well as some more of her post-fight comments. Swipe to the right to see them:

SWIPE): Things went down between Moniece & Princess On and Off Set of #LHHH ? A sit-down was filmed & will play out in an episode very soon. ? #LoveAndHipHop #LoveAndHipHopHollywood #MonieceSlaughter #PrincessLove #RealityTV

Now, it appears as if Moniece has filed a police report against Princess. Princess, who’s supposedly admitted to throwing at least some of the things Moniece mentioned, claims that it was Moniece who provoked her in the first place. (At least one source says Moniece started it by throwing cake at Princess.) But Moniece shared a photo of her hand in a bandage on social media, implying that the rock Princess threw caused the injury.

So far, no outlet has been able to confirm that Moniece actually filed charges against Princess. It’s possible that this part of the story is simple posturing in advance of the Love & Hip Hop Hollywood Season 5 reunion special, which is said to be filming soon.

Why do Moniece and Princess hate each other?

Their feud became more public last year, but it sounds like the two women have had it in for each other for a lot longer than that. VH1 shed some light on the mystery with a LHHH bonus clip from earlier this year. In the clip, Moniece says that she thinks Princess has had it out for her ever since the two met face-to-face at Yandy and Mendeecees’ wedding all the way back in 2015.

As Moniece explains, she called Ray J “Raymond,” which caused Princess to snap, “His name is not Raymond!” When Moniece says she’s been calling Ray J by that name since she was seventeen years old, Princess responds that she “didn’t like the fact that [Moniece] was so familiar with her man.”

But the bad blood didn’t end there:

It doesn’t look like we’re going to get a resolution to this feud — whether good or bad — anytime soon.