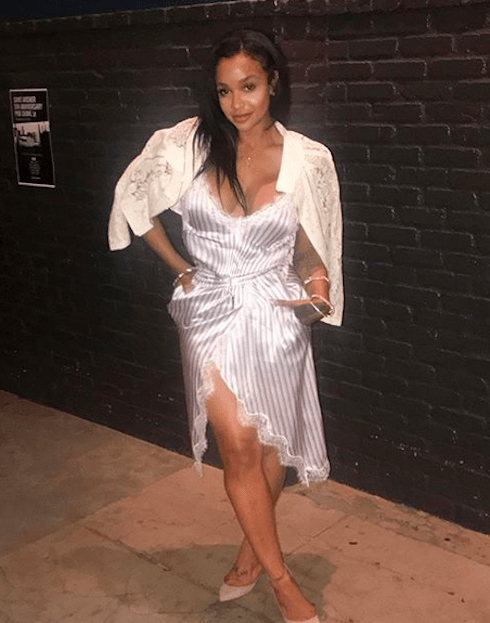 Are Masika Kalysia and Geno Smith dating — or are the LHHH star’s fans just misinterpreting a photo the two took together at her recent birthday party? Followers went wild trying to ID the man posing with Masika in a pic that had his head cropped out; now that he’s been identified, though, it looks like the Queen of Clap Back might not be too pleased.

Masika, who’s been teasing a fiery departure from Love & Hip Hop Hollywood for months, teased a “big birthday announcement” in an Instagram post before her June 7th bash. The first two photos in the update were of Masika posing in a gorgeous dress. But the third featured herself and a mystery man:

Of course, you can’t put the phrase “big birthday announcement” together with a photo like that and not expect the amateur sleuths of the internet to go crazy. Within hours, Masika’s would-be date had been identified: He’s former New York Giants and current Los Angeles Chargers backup quarterback Geno Smith.

Here’s a proper photo of Masika Kalysha and Geno Smith together, via @HollywoodUnlocked:

#FlirtAlert #MasikaKalysha snagged her an #NFL boo. Wonder if she can make him #TakeAKnee ?? #GenoSmith

Since Geno was ID’d, none other than Love & Hip Hop home base VH1 has seemed to confirm the pair’s relationship. However, Masika appeared none too pleased with her fans’ quick detective work — she took to Twitter with a three-part head-shake directed at those same fans’ unwillingness to, in Masika’s words “keep [a] private life private”:

Smfh y’all talk so much shit b/c I don’t share shit. I try 2 share parts of my bday wit y’all & y’all wanna do a fucking Fbi investigation to figure out some shit & you wonder why a Bitch keeps her private life private. Y’all ruin everything, blowup everything, make up everything

I don’t need validation from strangers to know my worth as a woman. Y’all put so much value on a public persona it’s sad. B/c I don’t post pictures with men y’all dumb asses really be believing that there’s not a line of your mcm’s wrapped around the building waitin on a chance

& I say that in the humblest way possible. I don’t need nor do I want the attention. I’d much rather y’all trolls keep thinking I’m obsessed wit a nigga that won’t leave me alone or think that I’m over here sad & Lonely with no one to love me. Y’alls 2 favorite fairy tails

Masika will be back in action when Love & Hip Hop Hollywood Season 5 drops later this summer.