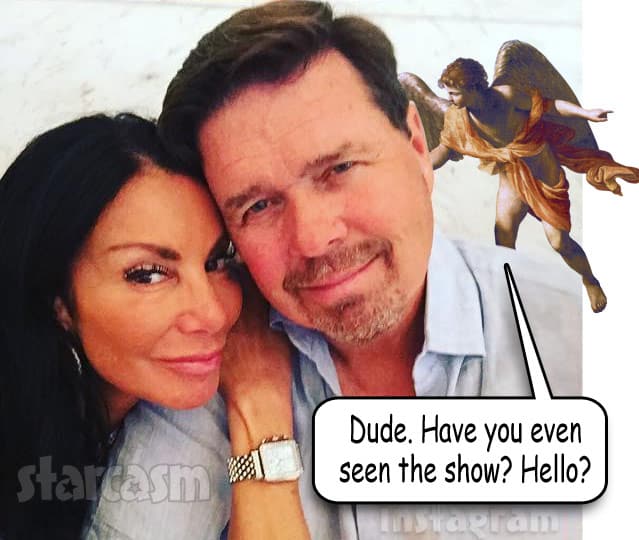 Rumors have swirled for weeks that the two-month marriage between The Real Housewives of New Jersey star Danielle Staub and husband Marty Caffrey was already on the rocks. Now, Marty has confirmed the rumors with a three-page statement in which he says he has suffered “financial, verbal and emotional abuse” from his “arrogant, disrespectful, presumptuous and entitled” wife.

Marty’s frustrated comments come shortly after Danielle’s rep issued a less verbose statement about the state of the pair’s relationship. “Danielle is having some difficulties with her marriage right now and is hoping everything will work out,” the rep told People on Saturday.

Marty’s response was a lengthy counterpoint, which he sent to Radar Online on Sunday. “Danielle and I have been going through some recent challenges in our marriage that have escalated in the past week,” he begins, before revealing that he hasn’t given up on the relationship either. “It is my hope that we can get through this but it will take some work and she, as well as I, will have to change.

To head off any misleading reports about a pending divorce, Marty says that process has not begun — yet: “To clear one thing up, I have not filed for divorce at this time.”

Marty says that his children had a hard time accepting the couple when they began dating “because of their perception of [Danielle] from TV of the early seasons.” He the claimed that he’s never seen the early seasons of The Real Housewives of New Jersey with Danielle — something that helps explain why he seemed completely gobsmacked when she began to display some of the same characteristics that made her one of the Real Housewives franchise’s biggest villains.

But Marty adds that Danielle has never forgiven his children for their judgment, and says that “[Danielle] offers no path forward to allow my children back into my life. Yes I see them but I do it alone and not with my wife.” Marty reveals that he bought he and Danielle’s current house nine months ago, and his kids have never set foot in it.

“Not once was there an invitation for them to stop by whenever they’re in town. Danielle forbids it,” he says.

In stark contrast, Danielle’s daughters are often around, and Marty says that they act like his family doesn’t even exist. “Do they really think bleaching my kids out of my life would really be a good relationship building strategy?”

Marty continues by expressing his frustration at Danielle in their personal interactions as well:

I’ve done OK in my life but if that’s not good enough then there’s nothing I can do about that. I bailed Danielle out of a really tough situation. I gave her a platform to be relevant again. Because I believed in her and loved her. I still love her and still believe in her. And her payback is nothing but financial, verbal and emotional abuse. I’ve tried dozens of times to talk to Danielle about this but she just buries her head in the sand.

The Real Househubby reveals that the final straw was Danielle’s extravagant masquerade-themed birthday party over the weekend. “I wasn’t allowed to know who was invited. My family and friends were left out until the last minute only because I kept pressing the issue,” Marty says. “There was no intention of including my family or friends. But I was expected to pay for it….This arrogant, disrespectful, presumptuous and entitled attitude I find disturbing. All of this is why I did not attend. You want to throw a self-indulgen[t], attention seeking party for yourselves, want me to pay for it, but I’m not allowed to know anything about it or to ask any questions? What world do you live in?”

Here are some photos from Daniellapalooza in which you will see her RHONJ co-star (and former nemesis) Teresa Giudice, but not Marty:

Marty insists everything in the relationship was about Danielle, and that she rarely ever even bothered to ask him anything about his own life. “It gets back to this unbelievable level of entitlement and narcissism that exists,” he asserts. “It wasn’t always that way but when she became relevant again, with my help, she changed. There’s never any time for just ‘us’. She should be thanking me, not verbally and emotionally abusing me, not dominating me, not ignoring me.”

The lengthy statement is not all finger pointing at Danielle, however. Marty admits that he is also responsible for some of their issues:

As for me? I certainly have made some mistakes and I own them. Sometimes I have embarrassed her. And for those times I’ve apologized and I will continue to do so. She, nor anybody else, never deserves to be treated poorly. I’m sure Danielle could list my faults and her side of the story. And I recognize that. I have many faults. I’ve often asked her to admit we both have 50% blame and we can go from there. But all we talk about is my 50% which makes it 100% my fault. I’ve asked her often if we could both exchange 5 things we want or need from our relationship, on a piece of paper. Therefore there would be no yelling, no interruptions. And let’s see what happens. I never get a response. Normal life things like having a budget, embracing family, speaking to each other with respect, building each other up, 2 way conversations, committing to alone time, travel, etc I don’t know, maybe I’m crazy for thinking that way and that it doesn’t exist. I believe it does. 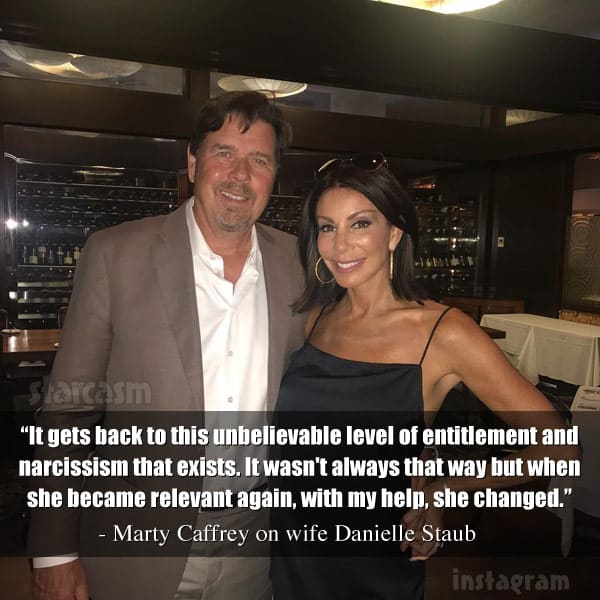 Danielle is very disappointed that Marty spent time composing a three-page statement for the media but won’t sit down and talk with her about the situation. She is also disappointed that he seems much more concerned about press coverage than he does about his marriage.

Just based on what Marty said, and how he said it, I cannot imagine these two will be able to work things out. But, if a divorce would potentially jeopardize her Bravo screen time, we might see a complete turnaround from Danielle! I think the most important lesson to take away from this is that if you plan to marry a reality star, you really should watch the show first.