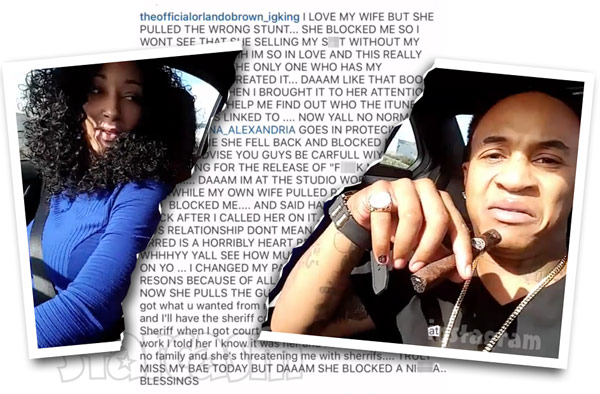 It’s been almost two weeks since That’s So Raven star Orlando Brown was arrested yet again, this time for allegedly hitting his girlfriend Omena in a police parking lot while in possession of meth. After the incident, Orlando posted a series of Instagram videos riding along with Omena in which he laughed off the accusations as he “smoked” a rather large, unlit cigar.

At the time, Omena was quick to come to Orlando’s defense. “I am far from a scared, beat woman. Lol,” wrote Omena in response to Instagram commenters concerned for her safety. “I am too much woman to allow for that in my universe,” she added.

Judging from new posts by the couple, it appears that Omena is too much of a woman to allow something else in her universe as well: Orlando!

Check out this crazy post from Orlando in which he goes off on Omena over some sort of iTunes stunt in which she supposedly created a fake account so she would get the five dollars or so from selling his song — at least I think that’s about right. Judge for yourself: 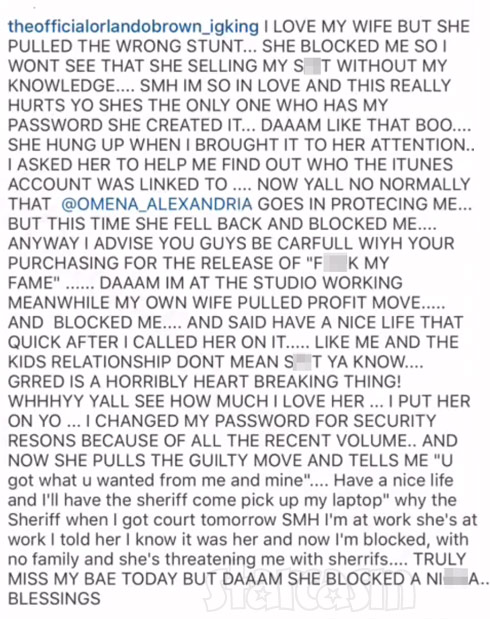 Just in case you couldn’t read the image for some reason, here’s the text:

I LOVE MY WIFE BUT SHE PULLED THE WRONG STUNT… SHE BLOCKED ME SO I WONT SEE THAT SHE SELLING MY SH!T WITHOUT MY KNOWLEDGE…. SMH IM SO IN LOVE AND THIS REALLY HURTS YO SHE’S THE ONLY ONE WHO HAS MY PASSWORD SHE CREATED IT… DAAAM LIKE THAT BOO…. SHE HUNG UP WHEN I BROUGHT IT TO HER ATTENTION.. I ASKED HER TO HELP ME FIND OUT WHO THE ITUNES ACCOUNT WAS LINKED TO …. NOW YALL NO NORMALLY THAT @OMENA_ALEXANDRIA GOES IN PROTECING ME…. BUT THIS TIME SHE FELL BACK AND BLOCKED ME…. ANYWAY I ADVISE YOU GUYS BE CAREFUL WITH YOUR PURCHASING FOR THE RELEASE OF “F**K MY FAME” …… DAAAM IM AT THE STUDIO WORKING MEANWHILE MY OWN WIFE PULLED PROFIT MOVE….. AND BLOCKED ME…. AND SAID HAVE A NICE LIFE THAT QUICK AFTER I CALLED HER ON IT…… LIKE ME AND THE KIDS RELATIONSHIP DONT MEAN SH!T YA KNOW…. GRRED IS A HORRIBLY HEART BREAKING THING! WHHHYY YALL SEE HOW MUCH I LOVE HER … I PUT HER ON YOU … I CHANGED MY PASSWORD FOR SECURITY RESONS BECAUSE OF ALL THE RECENT VOLUME.. AND NOW SHE PULLS THE GUILTY MOVE AND TELLS ME “U got what u wanted from me and mine”…. Have a nice life and I’ll have the sheriff come pick up my laptop” why the Sheriff when I got court tomorrow AMH I’m at work she’s at work I told her I know it was her and now I’m blocked, with no family and she’s threatening me with sheriffs…. TRULY MISS MY BAE TODAY BUT DAAAM SHE BLOCKED A N!GGA.. BLESSINGS

Omena responded with this photo meme and the following caption: 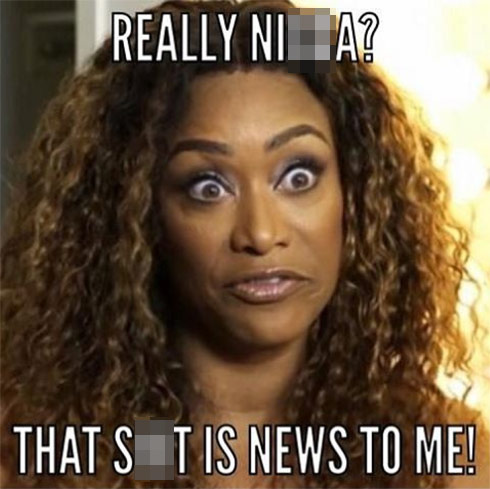 I didn’t expect to have so many people who f**ks with me! Thanks for the meme. Cracked me up as I was reading the bullsh!t right along with you. I am ok. Thank you to those who know bullsh!t when you see a stunt. Let’s not get into feelings and sh!t because honestly I know who he is.. So frankly I can’t say I’m surprised. The cream always rises to the top as they say. I RISE. ?❤

And then there were these interactions with Omena in the comment section:

COMMENTER: Be strong. Just hate that you have to go through this in the public eye. Everything comes to the light eventually!

OMENA: thanks pookie. You know it. And with him and all his shenani’s it’s coming soon. Although I wish no harm to him. He will be held accountable both in this life and in God’s judgement. I’m blessed to be still standing strong. ??

COMMENTER: I hope this all boils over and he doesn’t try to act crazy. He really needs some help cause if attacking ur wife is ur soultion Orlando u desperately need help. Smh hope this dont get ugly!

OMENA: I’m just gonna put it in God’s hands. I’ve been nothing but a supportive wife and I’m just stuck.. like whoa!!! Who me??.. #shrug I know all is supposed to be fair in love and war but I didn’t know I was at war… There must be something great in store for me is all. And I wish him nothing but the love and happiness he seeks. ❤

COMMENTER: He didn’t have to blast you like that true but yo a$$ did that sh!t FASHO ???

OMENA: What benefit is it to me to steal from my man? How is that even possible. I’m the connect to the TV and Music BIZ at the level most hopefuls want youngster. Education is key boo @djsocity support ya boy but watch what u believe and what u say

If Orlando Brown really does have court tomorrow, and the woman he allegedly assaulted is no longer on his side, tomorrow could be a very long day for ol’ OB! Stay tuned…

Or don’t stay tuned if your feelings are similar to this commenter in The Shade Room:

Like [a] month ago I was wondering what happened to [Orlando]. Then here comes all this cramp about him and his gf. And all these weird posts. Ok so….. Ummmm I know what he’s up to now and now I’m done!!!!!!

Kylie and Tyga are officially on a breakup split hiatus, again, according to the Anonymous Insider Collective