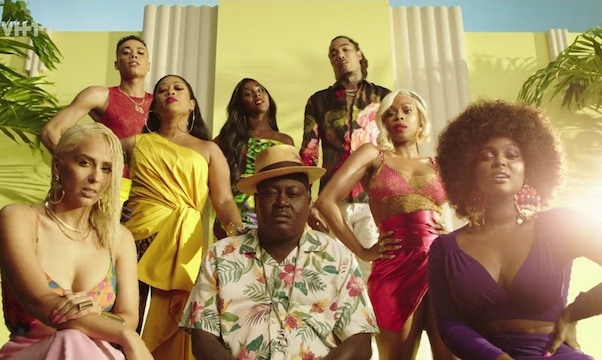 Last week, rumors of Love & Hip Hop Miami canceled raised plenty of eyebrows among the show’s viewers. Though it’s true that LHHMiami has had the lowest ratings of all four franchises, it’s also the youngest (by far — Hollywood is about to turn six; Atlanta is eight; and New York will be ten this year). And Miami has suffered from VH1 playing time slot shuffle; it had three different spots over the course of Season 2.

But we’ve since learned that the rumors can be put to bed: the show will in fact be back, and there’s a very simple reason why LHHMiami Season 3 hasn’t started filming yet. Whereas normally production for the show’s January debut would have started at this point in the calendar, according to the always reliable @BestRealityBlog, a change in production companies has every Love & Hip Hop show running behind.

Love and Hip Hop Miami IS NOT canceled!!! There’s a new production company and ALL franchises have been handed over from monami/Eastern to that new company. So, all cast deals from prior seasons have to be turned over to the new company. Also, pick up notices for the upcoming have to be sent out under new production. This has caused ALL of the most recent seasons of LHH to start filming(production) late! #LHHMIAMI WILL continue! #LHHMIA #LHHATL #LHHH #LHHNY

The big surprise here is that apparently *every single* Love & Hip Hop show has switched to the new production company. As we reported last year, VH1 announced it was looking for a new company to take over LHHH and Basketball Wives; the network was also supposedly looking to turn Love & Hip Hop into more of a “black Real Housewives.” (I would argue that the shows have been doing that on their own for the last couple of years, but that’s a topic for another article.)

Also unspoken is the possibility that every single Love & Hip Hop show might have its next season premiere delayed due to the change in production. Generally, LHHNY comes back in November or late October; Miami follows in January; LHHATL comes on in March; and LHHH returns in July. Their reliability is part of the shows’ continued success. But, depending on how long the delays last, we might not see the new season of LHHNY until next year — and everything else may get pushed back a month or two as well.