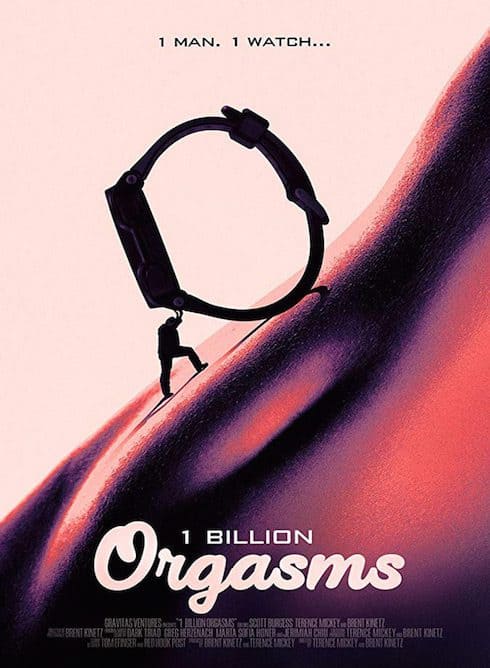 1 Billion Orgasms, from filmmakers Brent Kinetz and Terence Mickey, is an interesting and difficult movie about an interesting and difficult topic. It’s the story of Aaron Headley, a biomedical electrical engineer whose real passion is developing a watch that’s supposed to help bring about female ejaculation. The watch is called the Squirt Watch. Aaron tells anybody and everybody about the Squirt Watch. It’s impossible to believe he doesn’t do this when there aren’t cameras rolling.

Aaron’s product seems to be the fulcrum around which his life revolves. Because he’s sunk so much money into the watch, lives in a modest home in the Dallas suburbs — while, to hear him tell it, most of his professional acquaintances own mansions. Whenever his two daughters see him, he’s sitting in his home office, assembling the watches by hand; whenever they talk to him on the phone, he’s including asides about how well the watch is selling at the annual Adult Video News convention in Las Vegas, where Aaron always has a booth. The other people in Aaron’s life know him as a brilliant engineer (one former teacher compares him to Tesla, Einstein, and Bell), and as an openly sexual being.

Aaron comes to us almost like a superhero, in that he presents as a fully formed, self-evident being. But when you get past the initial surprise of the premise — and you should! — you’ll realize that 1 Billion Orgasms, not necessarily through any fault of its own, leaves unanswered some basic questions of anatomy and performance. (As well as of character, about which more shortly.) For example, does the squirt watch measure the wearer’s pulse as (s)he’s thrusting a hand upward? Is there, like, a Thrusts-Per-Minute (TPM) ideal that the wearer is supposed to reach? And, most importantly, how do the pace and intensity of the watch-wearer’s actions relate to the partner? 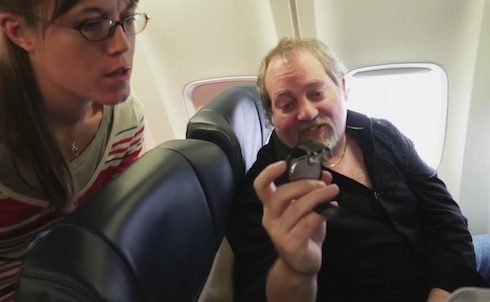 Aaron explaining the Squirt Watch on the way to Las Vegas. He hasn’t said the words “Squirt Watch” or “female ejaculation” yet. Photo via 1 Billion Orgasms.

To be fair, all of 1 Billion Orgasms‘ demonstrations of technique are either blurred out or feature another person standing between the camera and the sexual act. We only ever *hear* what happens. And maybe this is the kind of thing that you just have to see, or do, to understand. (At one point, Aaron says he’s had his own hands alongside some of his friends’ in their partners’ vaginas — that is, those who were “good sports” about the idea — in order to show how to press properly.)

Plus, it’s not just 1 Billion Orgasms that comes up short. Here’s Aaron’s own explanation of his invention from the price sheet at his AVN booth in the film. Even at an adult expo, there are precious few specifics to be found: 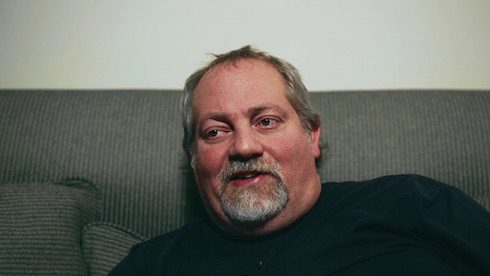 Aaron also stumbles when asked and challenged about the watch by other AVN attendees. An intriguing and all-too-short scene about halfway through 1 Billion Orgasms features Aaron at his booth in conversation with a sex educator who wants to understand how the thing works. As he starts to explain, she even half-jokingly tells him “I’m a sex educator; you better be careful.”

Aaron, in full salesman mode, absorbs her criticism: “Completely different — I know.” He then changes some of the words, but repeats what he already told her: “The speeds that are set [in the watch], virtually everyone will trip by the time you get to those speeds.”

So the very first time that I actually stumbled on this, I was in Corpus Christi. I remember the sounds of the ocean. It was absolutely a gorgeous morning. To this day, I’m not sure what compelled me to do this exact technique. And she absolutely started to have a female ejaculating orgasm. In fact, she said it was the best orgasm of her life. The point isn’t a squirt watch, you know — the point is that you’re getting to this fundamental, amazing moment.

At another point, Aaron estimates that he’s spent around $300,000 on the creation and marketing of his watch. Despite his considerable biomedical engineering income, he’s also taken out loans from friends to fund his efforts. And he travels to the Adult Video News Expo in Las Vegas each year, subjecting himself to considerable humiliation and rejection, all to try and make it big.

Given these extremes, it’s impossible to take Aaron at his word. The point, more and more, is the Squirt Watch. If it weren’t, he wouldn’t feel he had to be personally responsible for a billion orgasms in the first place. The “fundamental, amazing moment” he’s describing happens between two people — or a few more than that, if you’re feeling like a good sport. But always between individuals. No one in 1 Billion Orgasms models this ideal better than Aaron’s own sweet, sex-mad parents, who were always open about their attraction to each other and their sexuality.

The AVN trade show, by contrast, is about commodities: the commercial development of sex. So there seems to be a fundamental disconnect between Aaron’s intentions and his execution. 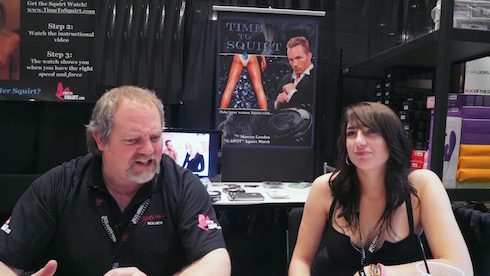 Aaron and Kat at the Squirt Watch AVN booth. Photo via 1 Billion Orgasms.

After Aaron, 1 Billion Orgasms displays this disconnect most vividly and tragically through Kat, the woman Aaron has hired to be his booth assistant for the AVN show. Tall, confident, and young, Kat at first seems at ease with Aaron and his product. And she’s at least mildly enthused by the prospect of spreading the good word about female ejaculation: “If there’s somebody who can help [women] get there,” Kat says, “why not? I think it’s great. People need to calm down. It’s just sex. It’s not the end of the world; no one’s gonna die; you’re just gonna feel really great.”

It’s important to note, given the nature of the AVN conference, that we don’t know exactly what “booth attendant” entails. But at first, Kat and Aaron seem to have a good, employer-employee time together. She helps him set up the booth and talk about the watch to other attendees; she commiserates with him when his attempts at roping in other adult star endorsements blow up in his face.

Things take a darker turn when Aaron strikes up a conversation with a man who organizes swinger parties. It’s the last night of the conference, and Aaron tells the man, while Kat looks on warily, to sign he and Kat up for some fun. But the Playboy Mansion grotto it isn’t: the party they wind up going to is, in a word, lame, with little evidence of any swinging except behind one closed door in the hotel suite. Before long, Aaron has suggested Kat go behind the door with a couple other attendees, so one of them men can try out the watch on her. And then, when the door has closed, Aaron says he knows they’re going to have to call him in to make Kat’s orgasm happen.

He turns out to be correct. As is the case with every other demonstration in the film, we only hear what happens; the shot itself is just of the closed door. And Aaron is his usual happy self after he helps the man wearing the watch. But Kat leaves Las Vegas early, giving a final interview in tears (and with Aaron nowhere in sight). Her last words in 1 Billion Orgasms sum up the awkward-at-best nature of her relationship to Aaron as his employee, as well as Kat’s feelings about what she earlier called the “prostitution game” she felt she was playing:

I want girls to try to see that they don’t have to measure up to a p0rn star status. ‘Cause I don’t want to. And I don’t think that they should, either.

You could argue that, depending on their agreement, Aaron wasn’t taking advantage of Kat. He was simply an entrepreneur demonstrating his product, just as he would if the product were a blender and Kat a tomato. And you wouldn’t be factually incorrect to argue this. But in order to do so, you have to take the side of the commodity that the watch is and that the individual becomes. It’s as far from a “fundamental, amazing moment” that you can get.

1 Billion Orgasms is available for streaming and purchase here. The Squirt Watch currently sells for $159.