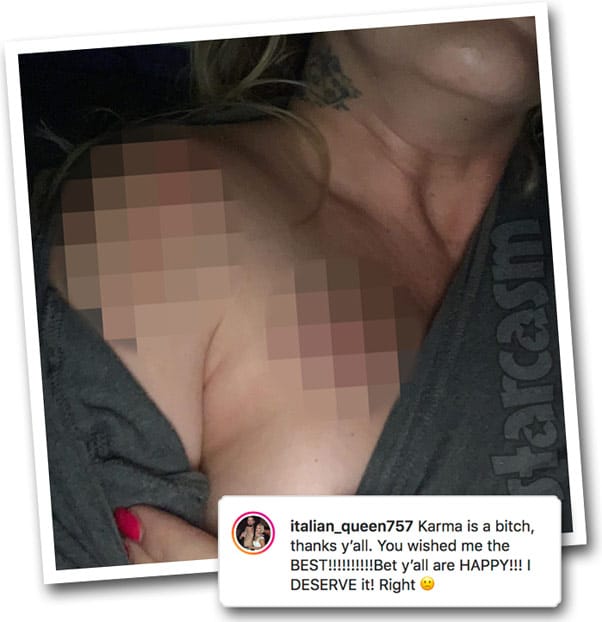 On Friday night’s episode of Love After Lockup: Life After Lockup, viewers saw Shane get really upset after discovering that his wife Lacey was still texting her ex John. In addition to getting into a heated argument with Lacey and booting the camera crew from their house, Shane was also shown smashing his glass against the refrigerator in the kitchen. Just as the episode was airing, Lacey posted a rather disturbing photo of herself with what appears to be some very serious injuries.

“Karma is a b*tch, thanks y’all,” she began her caption for the photo, which was accompanied by another picture that appears to show damaged furniture. “You wished me the BEST!!!!!!!!!! Bet y’all are HAPPY!!! I DESERVE it! Right ?” [Click here for the uncensored photo.]

Lacey doesn’t explain how she got the injuries, or even how old the picture is. The post prior to the image was a video clip from the episode featuring Shane getting upset, so most of her followers assume that Lacey was suggesting Shane caused the injuries.

Another hint that Lacey was suggesting it was Shane who caused her injuries was an Instagram story she posted just after. “I won’t stop communicating with my bff @john_love_after_lockup because he might have addiction issues but he’d NEVER put his hands on me!!!!! Ever!!!!” Lacey wrote. “I love this man with all my heart ❤️.”

The timing of the injury photo post lines up with the airing of the episode, but the episode was filmed a while ago. Lacey and Shane have been quite chummy (like “pay us money on an adult site and see everything” chummy) over the past month, so clearly they remained together after their altercation on the show.

As far as Lacey’s comment suggesting that some people may be happy because she was hurt, I assume that is in reference to the fact that Lacey has been violent on the show more than once. She has essentially assaulted both Shane and John while cameras were rolling, but given that they are male and ex-cons, the violent slaps didn’t seem to garner much outrage.

In the comments section of the Instagram post someone seemed to confirm Lacey’s reaction speculation. “Well you can’t go around hitting men and expecting nothing to happen. ??‍♂️” Lacey replied: “I didn’t even hit nobody when this happened ty.”

Lacey actually joked about her attacking Shane and John on Twitter earlier this week. “Seeing all these previews on the new season of #lifeafterlockup y’all ladies should of took notes on how to smack a mf from my season of LAL ? Weak ass slaps,” she wrote on Tuesday, before revealing she was only joking. “JK… keep ya hands to yourself,” she continued in the tweet. “??#domesticviolence is NOT OK ?”

Speaking of Lacey joking on Twitter, she actually came for her co-star Marcelino Santiago after the scene with his wife Brittany in which Marcelino is reluctant to look for a job other than playing poker professionally. At one point he tells Brittany that he’s too old to take orders from some youngster.

“Y’all still got @BlazeBird1 & @Brittany_wetv as your favorite couple?” Lacey asked in a tweet and delete during the episode. “@Blazebird1 acts like he’s too old to get a job! lmao him and @ShaneWhitlow1 should hook up! And come here @Brittany_wetv I got you ❤️??”

Lacey later posted a selfie on Instagram and added in the caption: “I’m tryin to figure out this poker hustle fr were do i sign up?? Referral anyone !! ? I need a 6th hustle ???”

Marcelino is not one to back away from a fight (right Tito?), and he is also not afraid to throw a Love After Lockup co-star under the bus, so I’m guessing we will be getting his reaction to Lacey’s comments soon.

Getting back to the suggestion that Shane may have abused Lacey, Shane has not posted on Instagram or Twitter in the past week. That had me wondering if he was back behind bars — perhaps after an altercation with Lacey. However, he did change his Facebook profile photo Friday night, and even responded to a comment on it. The new profile photo is just him and no Lacey.

We will certainly keep an eye on things and will update if there are any major developments!

UPDATE – Lacey left a comment on her post that I didn’t see before the whole thing was deleted in which she explained the second photo. Here’s the picture: 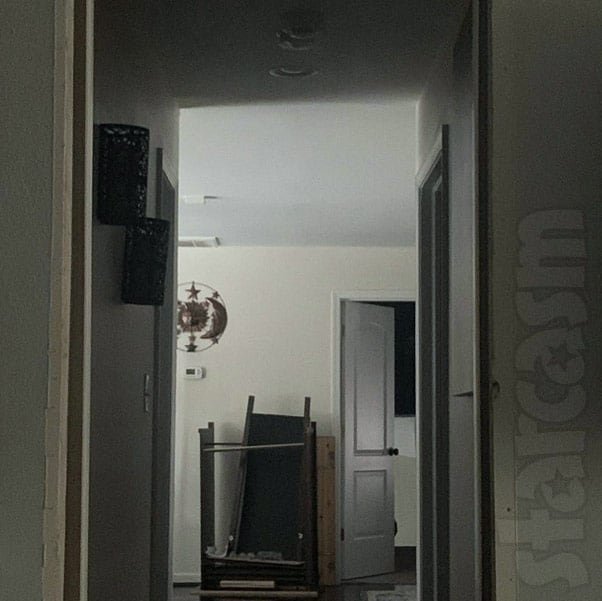 “What is going on in the second picture?” a follower asked. “Broke my door down,” Lacey replied, adding a crying emoji.