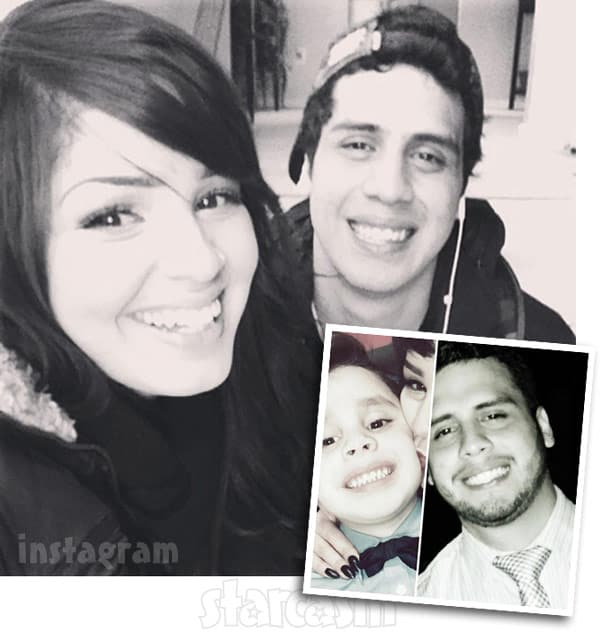 Tiffany Smith’s nine-year-old son Daniel is one of the break-out stars of TLC’s new 90 Day Fiance: The Other Way reality series. The big-hearted youngster has not only won over TV viewers with his positive attitude and kind nature, but he has also been a huge factor in, and motivation for, his new stepdad Ronald turning his troubled life around.

Given how great a kid Daniel seems to be, many viewers have openly wondered why there has been absolutely no mention of Daniel’s birth dad on the show. Tiffany answered that question on Wednesday with a gallery of images of Daniel’s real dad Roger posted on Instagram, accompanied by a lengthy caption revealing that Roger died in October — just prior to her and Ronald’s South African wedding.

Here is Tiffany’s caption in its entirety:

Just a post so that everyone can see Daniels biological father. He was a good person with an amazing heart and so many people who loved him, myself included. He gave me the greatest gift, my son. Roger was not involved in Daniels life but asked me about him he never disappeared from our life, he was just never ready to be a dad. We never planned to have a child but it happened I was ready to face it as unprepared as I was, he was never prepared and I accepted that. I never said one negative thing to Daniel about him, I made sure Daniel knew his biological dad was a good kind person. Roger passed away in October 2018 he was trying to break up a fight between two people at his workplace and was shot in the head. It is a hard reality to face, but it happened. He left this earth with honor doing something selfless. We loved him, we love him. He is always with us ❤️ we love you Roger, we love u butta.

Just a post so that everyone can see Daniels biological father. He was a good person with an amazing heart and so many people who loved him, myself included. He gave me the greatest gift, my son. Roger was not involved in Daniels life but asked me about him he never disappeared from our life, he was just never ready to be a dad. We never planned to have a child but it happened I was ready to face it as unprepared as I was, he was never prepared and I accepted that. I never said one negative thing to Daniel about him, I made sure Daniel knew his biological dad was a good kind person. Roger passed away in October 2018 he was trying to break up a fight between two people at his workplace and was shot in the head. It is a hard reality to face, but it happened. He left this earth with honor doing something selfless.We loved him, we love him. He is always with us❤️ we love you Roger, we love u butta. @jwi_xo

Tiffany’s post elicited numerous supportive comments, and she revealed more information in her interactions with them. Here are some excerpts:

COMMENT: Daniel looks so much like him. So sorry for your loss. I’m sure he’s very happy to see your and Daniel’s relationship with Ronald. God bless!

TIFFANY: He was very happy for me and wished me nothing but the best right before my wedding. Just a few days before he passed he told me he was happy to see me with someone who was going to be the dad he never was and someone to love me like I deserved. He always told me how much of a good mom I was and how much of a good person I was. He was such a kind person with such an amazing heart.

TIFFANY: Yes when he was younger.

COMMENT: Not trying to sound negative or rude, but how do you get over the fact that he wasn’t active in his son’s life, and you’re just ok with it? My son’s father has nothing to do with our child and I absolutely hate him! Like I said, not trying to be rude or mean, I was just trying to figure out how you’re still so kind to a person who isn’t even there for their child?

TIFFANY: To be honest it takes a lot, especially in the beginning when you feel so alone. But just to breathe and think everything happens for a reason if he isn’t meant to be part of your son’s life he won’t be and whatever is happening it’s all part of something bigger. Some people struggle with custody and some people struggle with other parents that might be bad influences, some people struggle with parents who might not actually be what’s best for our children. I always told myself I don’t have to worry about that, I will raise him the right way. I had complete control over how I raised him and how I wanted him to be. And I also have the opportunity to teach him to be a better man. And just remember, we have no control over what might happen to us, but we have control over how we handle it

COMMENT: So we’re now saying a deadbeat dad is a great guy? If you had to face it then so should he. Women need to stop making excuses for these deadbeats who do the deed and then run. Sorry but he sounds like a complete loser who was alive for most of your son’s life and should have been involved.

TIFFANY: I agree with you he should have been involved, but I’m not going to hate him for my son’s sake, you have to understand. It’s really easy to hate him and be resentful for him not doing his part. It’s a lot harder to let that pain go and still love him anyway. I’m not gonna tell him his dad was a piece of sh*t because I’m literally then going to convince him that half of him is sh*t, and that’s never what I wanted to do

COMMENT: I have a 6-year-old daughter and her dad passed away from a brain aneurysm when she was 15 months old in October 2014. It’s such a hard thing to deal with. Not really the same situation, but I can relate to having to raise a child on your own… Now you have an awesome father figure for your children and all your hard work is paying off! You should be super proud of yourself! Anyways take care and god bless xo.

TIFFANY: I’m so sorry to hear that. I’m sorry for your loss. It’s very, very hard. It’s such a lonely feeling knowing you made a perfect little person with someone and that someone no longer exists.

TIFFANY: I think when you gain the title mother you gain strength you never knew possible we have no choice but to be strong.

COMMENT: OMG twins! So sorry for your loss. It’s a great thing that Daniel knows his father was a good person. Did he ever meet his dad?

TIFFANY: He did when he was a lot smaller. Daniel has memories with him that are very cloudy in his mind, but he does remember.

TIFFANY: I truly believe so, but I also think it’s so important to look at situations that might not be the best and try to find the positive. Part of me wanted so badly to be resentful towards him for not being more involved, but my heart always told me that he has his own battles and everything happens for a reason. And I still truly believe that, and I remind myself every day to be kind, even when it’s hard, because no one ever knows when it’s someone’s last day.

If you are curious to know more about Roger, his full name was Roger Ramos. He was an employee at Riptydz Oceanfront Grille and Rooftop Bar in Myrtle Beach, South Carolina, where the shooting took place on October 7. Roger was not working, but was present at the restaurant to watch a UFC pay-per-view event.

There were reportedly two fights that broke out at the restaurant, and during the second one, a man pulled out a gun and fired the shot that killed Roger. He was only 25 years old.

Here is the statement from the Myrtle Beach Police Department soon after the incident:

On Sunday October 7 at 1:13 AM officers with the Myrtle Beach Police Department were called to a shooting incident at 1210 N Ocean Blvd, Riptydz Oceanfront Grille. The scene is secure and there is no risk to anyone in the area.

Our investigation, at this time, has revealed that a fight broke out inside the bar and one male fired a weapon, striking the victim. Unfortunately, due to injuries sustained during the incident the victim did not survive. Due to the quick action of our officers and witness cooperation we identified the suspect within minutes and we have one person in custody.

24-year-old Jakkari Jaquille De’Andre Brown was arrested and charged with murder, possession of a deadly weapon during the commission of a violent crime, unlawful use of a weapon, and carrying a pistol or firearm into a premise of a business selling alcohol, beer or wine. Jakkari was denied bond on October 8 and is still in custody awaiting trial. 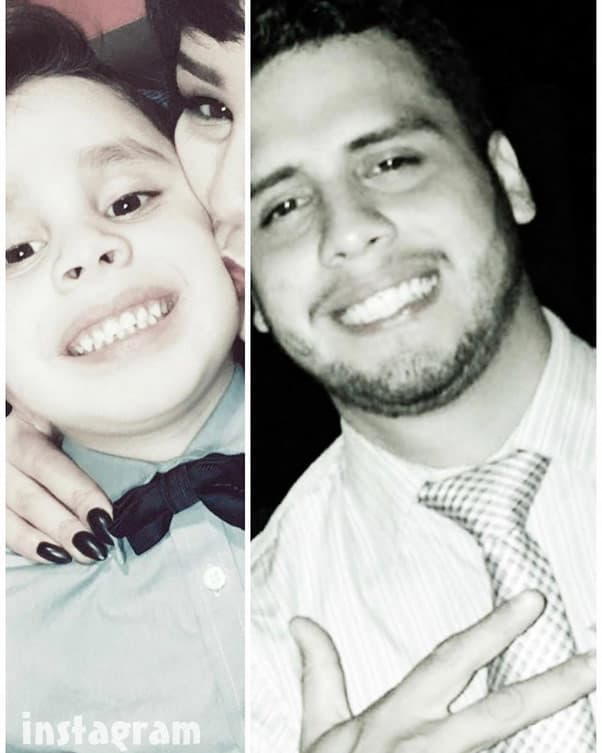 Roger’s mother Alma shared side-by-side photos of Roger and Daniel (above) with My Horry News the day after the shooting. “Same face,” she said as she began to cry.

“He always put other people before him,” Roger’s younger brother Keith said. “It’s a big burden on us, but we’re going to get through it.”

A GoFundMe was started to help Roger’s family with the funeral expenses, and the campaign overshot its $3,000 goal by $1,440.

I want to thank Tiffany for opening up and sharing the information about Roger. Daniel may be the break-out star from the family, but Tiffany is doing an amazing job of winning viewers over with her honesty and ability to keep her head high in the sea of negativity that always surrounds the 90 Day Fiance cast members. Her story certainly seemed to be one of the most likely heading for an absolute train wreck of a horrible ending, but I am guessing that the Vegas odds on whether or not Tiffany and Ronald will work out have changed DRAMATICALLY over the last few weeks! (My apologies for the gambling reference.)

To continue following Tiffany, Ronald, and Daniel’s story, be sure to tune in to new episodes of 90 Day Fiance: The Other Way airing Monday nights at 9/8c on TLC!