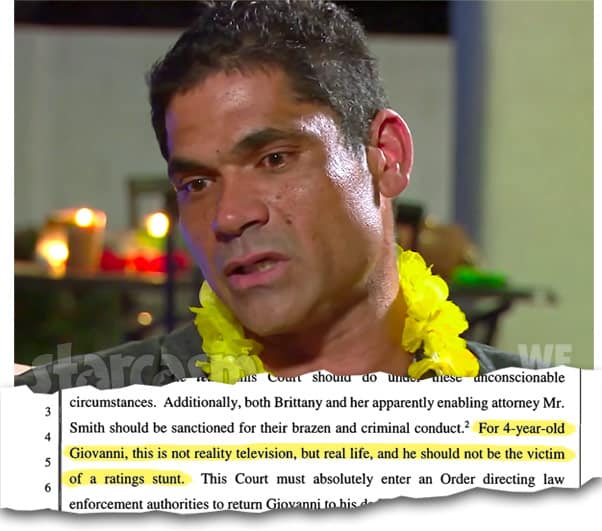 The custody battle between Love After Lockup star Brittany Santiago and her ex Tito Santana continues to escalate as he files court documents demanding the immediate return of their four-year-old son Giovanni and temporary sole physical custody.

As we previously reported, Brittany and her husband Marcelino Santiago took Giovanni more than a week ago, and Tito does not know where they are. Brittany later shared photos on Instagram confirming that Giovanni is with her, but both she and Marcelino deny claims that he was kidnapped.

According to the court filing by Tito, the alleged “kidnapping” took place after Tito and Marcelino got into a heated argument while filming for the new series Love After Lockup: Life After Lockup. Tito dropped Giovanni off with Brittany on April 28 and he was approached by show producer Alan Sharp to film a segment two days later.

When Tito arrived for the filming on Tuesday, April 30, 2019, Brittany’s new husband — a man Tito has barely even met and who is himself an ex-con — showed up and tauntingly announced to Tito — with cameras rolling — that Brittany was going to get “full custody” of Giovanni, resulting in a heated argument and altercation between the two men. Tito left the shoot and immediately began attempting to contact Brittany, who claimed to know nothing about her husband’s announcement and claimed it was “fake” for the show.

Over the next several days, Tito frantically attempted to find his son. Brittany was no longer at her last known address, and she stopped answering Tito’s phone calls. Tito contacted the producer Mr. Sharp, who refused to give him Brittany’s new address or to otherwise get involved. Tito contacted the Las Vegas Metropolitan Police Department, who informed him it was a “civil matter” in which they would not intervene.

* I should note that I have substituted Tito for his real name used in the filing.

Tito received a letter from an attorney representing Brittany on May 3. The letter made some very startling allegations about Giovanni’s living conditions when with Tito, which include “animal feces being left on the floor, piles of dirty dishes left untended, and piles of debris being left around the residence.” In addition, the letter from Brittany’s attorney alleges that Giovanni sustained injuries from Tito’s genet (an exotic pet that is something between a ferret and a cat) that were not treated. [We will have more details from Brittany’s side of things in a separate post.]

More from the filing:

As of the filing of this Motion, Tito — Giovanni’s primary custodian — has not seen his son in ten (10) days, has no idea where his son is, and is getting no responses from Brittany. In short, Brittany has abducted Giovanni and is actively concealing him from Tito, all likely in a selfish, orchestrated scheme to create drama and boost television ratings.

As we previously reported, Tito received primary custody of Giovanni with a default decree in 2016 — just before Brittany was arrested and imprisoned.

Pursuant to the Decree, the Parties share joint legal custody of Giovanni, and Tito has primary physical custody. The Decree does not afford any specific visitation schedule to Brittany, but does strictly limit her custodial time to no more than three (3) hours twice per week, with no overnight visits. As is standard for joint physical custody orders, the Decree also requires both Parties to maintain notice to the other of current address and telephone number.

At some point following the entry of the Decree, Brittany went to prison for manslaughter. During her incarceration, Tito actually facilitated visits between her and Giovanni at the prison. After Brittany’s release from prison approximately a year ago, Tito afforded her liberal visitation time, rarely denying her requests for visitation time, even when that time exceeded the parameters in the Decree. Everything was actually going quite well between the Parties until very recently…

#LoveAfterLockup stars @BlazeBird1 and @BrittanySanti11 respond to her ex Tito's allegations that they kidnapped her 4-year-old son Giovanni late last week. Meanwhile, Tito suggests that all of this is just to spice up their #LifeAfterLockup story line! https://t.co/XfuchNRQ3H

…Brittany has absolutely no right to keep Giovanni from Tito as she is doing. The Decree, which Brittany never even challenged, has never been modified, nor is there any basis for it to have been modified. After approximately a year of healthy co-parenting, Brittany has now effectively kidnaped Giovanni, and she is apparently being aided and abetted in that crime by her new husband, her attorney Mr. Smith, and/or the television producer Mr. Sharp. She is in open contempt of the Decree. Her behavior actually shocks the conscience.

Frankly, issuing a Pick-Up Order, awarding temporary sole physical custody to Tito, is the least this Court should do under these unconscionable circumstances. Additionally, both Brittany and her apparently enabling attorney Mr. Smith should be sanctioned for their brazen and criminal conduct. For 4-year-old Giovanni, this is not reality television, but real life, and he should not be the victim of a ratings stunt. This Court must absolutely enter an Order directing law enforcement authorities to return Giovanni to his dad Tito immediately.

Based upon the above and foregoing, Tito respectfully requests that this Court immediately issue an Order for Return of Child (or “Pick-Up” Order), directing any and all law enforcement personnel to assist in the prompt return of Giovanni to his dad Tito, who should thereafter have sole physical custody of Giovanni until further notice. Additionally, based upon the unconscionable nature of the conduct of Brittany and her attorney Mr. Smith, Tito respectfully requests that this Court issue appropriate sanctions against both of them.

There is a custody hearing scheduled for June 26.

Judging from the information in Tito’s motion, it certainly seems as though Brittany has overstepped her bounds. However, she and her attorney have filed a lengthy response that reveals there is a lot more to the story than what is included in Tito’s filing! Stay tuned, we should have that up shortly.

UPDATE – And here it is: