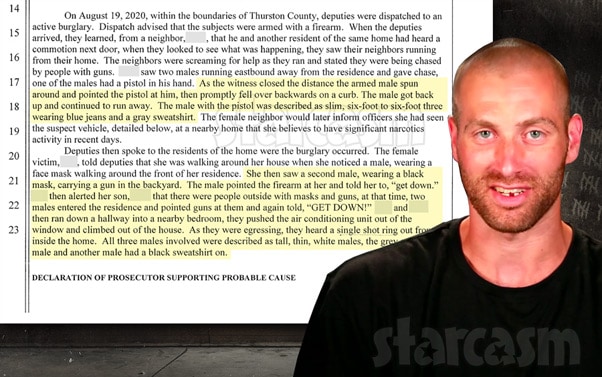 According to court documents and the police report from the incident, officers were dispatched to an active burglary in Thurston County on Wednesday, August 19. From the court documents:

When the deputies arrived, they learned, from a neighbor [Neighbor 1] that he and another resident of the same home had heard a commotion next door, when they looked to see what was happening, they saw their neighbors running from their home. The neighbors were screaming for help as they ran and stated they were being chased by people with guns.

[Neighbor 1] saw two males running eastbound away from the residence and gave chase, one of the males had a pistol in his hand. As the witness closed the distance the armed male spun around and pointed the pistol at him, then promptly fell over backwards on a curb. The male got back up and continued to run away.

The male with the pistol was described as slim, six-foot to six-foot three wearing blue jeans and a gray sweatshirt. The female neighbor would later inform officers she had seen the suspect vehicle, detailed below, at a nearby home that she believes to have significant narcotics activity in recent days.

The officers then spoke with the two residents, a mother and her son, who were seen running from their home. The mother told the officers that “she was walking around her house when she noticed a male, wearing a face mask walking around the front of her residence. She then saw a second male, wearing a black mask, carrying a gun in the backyard. The male pointed the firearm at her and told her to, ‘get down.'” (Matt was later identified by the witness as the man who pointed the gun.)

The woman alerted her son that there were two men outside the house with masks and a gun, at which point “two males entered the residence and pointed guns at them and again told [them], ‘GET DOWN!'”

The mother and son instead ran down a hallway and into a bedroom. They then pushed an air conditioning unit out of a window and climbed out of the house. The woman tells the officer that she was running from the house with her son when they heard “a single shot ring out from inside the home.” She described all three men as “tall, thin, white males.”

More from a different witness:

Another neighbor was returning home from work when he saw the witness chasing the males toward the Talking Cedars Brewery and he began to follow the males in his vehicle. As he entered the parking lot of the brewery, he saw a gold color Infiniti sedan pass him, occupied by three males, as it did, the front seat passenger pulled a black mask away from his face.

An attempt to locate was broadcast for the gold Infiniti to all law enforcement in the area. A short time later a Washington State Patrol trooper stopped a gold Infiniti sedan occupied by three white males. [Suspect 1] was driving and is the registered owner of the vehicle, [Suspect 2] was in the front passenger seat and Matthew Frasier was in the rear passenger seat.

Law enforcement canvassed the neighborhood and located a silver Subaru parked in a suspicious manner several hundred yards from the victim residence. In clear view inside the vehicle officers could see an empty handgun holster and pouches that contained speed-loaders for a revolver. A witness nearby stated the vehicle had been parked there earlier in the day and two white males got out of the vehicle, they were both wearing gray sweatshirts. The males were seen walking around the neighborhood and the victim residence throughout the day.

Matthew Frasier has a prior offense for Residential Burglary out of Thurston County.

As we stated in our previous post, Matt has a VERY extensive criminal history, including numerous arrests since his prison release featured on Love After Lockup. However, most all of his offenses prior to this most recent arrest were for non-violent offenses such as drug possession, shoplifting, and possession of stolen vehicles. Using a firearm while attempting to burglarize an occupied residence is much worse.

According to online records, Matt is facing charges of first degree unlawful possession of a firearm, first degree burglary, and second degree assault while armed. His bond for each of those charges are, in order: $100,000, $250,000 and $150,000. Unlike most all of his arrests in the past couple years, Matt did not post his bail quickly. According to jail records, he is still in custody.

In addition to those three charges, Matt is facing many other criminal charges from his numerous arrests over the last two years. Here is a quick list of the additional charges he is currently facing:

• Possession of a Controlled Substance (Heroin)

• Possession of a Stolen Vehicle

For a nearly complete timeline of Matt’s arrests and other legal issues since his appearance on the show, just click here and scroll down.