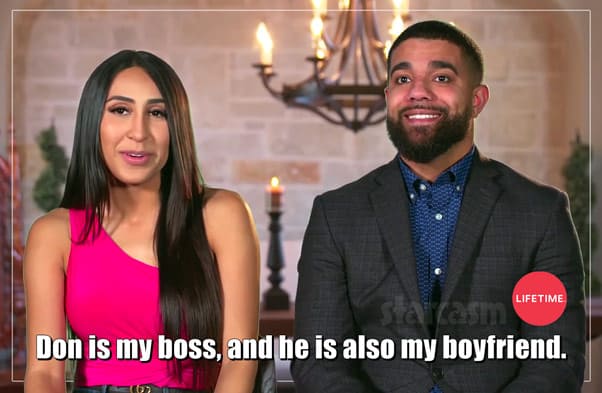 Lifetime’s wealth-gap-jumping romance reality series Marrying Millions wrapped up it’s first season back in September, and the network announced a few weeks later that the show would be back for a second run. After nine months of waiting, fans FINALLY have a Season 2 preview trailer, plus photos and bios for the seven couples to be featured — including some familiar faces!

Lifetime’s hit series Marrying Millions returns for a second season with seven couples and more relationships under the microscope than ever before, premiering Wednesday, August 5, at 10 pm ET/PT. Five new couples join the series with returning favorites Bill and Brianna from Dallas and Gentille and Brian from Las Vegas. From the creators of 90 Day Fiancé, Marrying Millions follows relationships where one partner is incredibly wealthy and the other is definitively not, leading the couple to face intense scrutiny from family and friends and questions about whether it’s true love… or true love of the money and lavish lifestyles. While these love stories may sound like modern-day fairytales, they are not without major challenges as the couples must try to bridge their vast differences and fit into each other worlds.

Fans will probably not be too surprised to see that Bill and Brianna are returning, but Gentille and Brian was unexpected to say the least! In addition to ending the season with Gentille breaking up on the couples wedding day, the two later exchanged rather acrimonious words on social media implying that their relationship was not salvageable. And that doesn’t even address the fact that much about the couple’s story line on Season 1 didn’t seem real in the first place.

#MarryingMillions Was the relationship between Brian and Gentille fake? Was the house on the show actually hers? Will there be a Marrying Millions Season 2? You've got questions, we've got answers! 🕵️‍♀️🔎 https://t.co/4ySxZUEqaZ

Judging from the trailer, it appears as though Gentille gets her feet wet again in the Las Vegas dating pool, but the process does not go well. So, Brian struts back on the scene and attempts to play the “devil you know” card in hopes of getting some more time hanging out in the elaborate mansion that Gentille doesn’t own. (Personally, I’m hoping that Brian’s return is just an episode or two and we get to see Gentille move on with someone else.)

In addition to the regular episodes, fans will also get some bonus content, including a Premiere after show and a catch-up special for Gentille, Brian, Bill and Brianna:

Marrying Millions: Couples Journey So Far premieres the week prior on Wednesday, July 29, at 10 pm ET/PT to provide a look at what’s life’s been like for Bill and Brianna and Gentille and Brian since season one.

Following the premiere on August 5th, at 11pm ET/8pm PT, Glamour’s West Coast Editor, Jessica Radloff, will be joined LIVE for a social aftershow with some of the Marrying Millions couples to chat about the premiere on Lifetime’s Facebook Page. The aftershow will also be available on IGTV and YouTube. A second social LIVE aftershow is also slated for September 23, at 11pm ET/8pm PT to discuss the finale of the first half of the season.

Let’s meet the new couples! Here’s the extended preview trailer followed by photos and bios for all seven couples! Be sure to tune in and meet them all when Marrying Millions Season 2 premieres on Wednesday, August 5 at 10/9c on Lifetime! 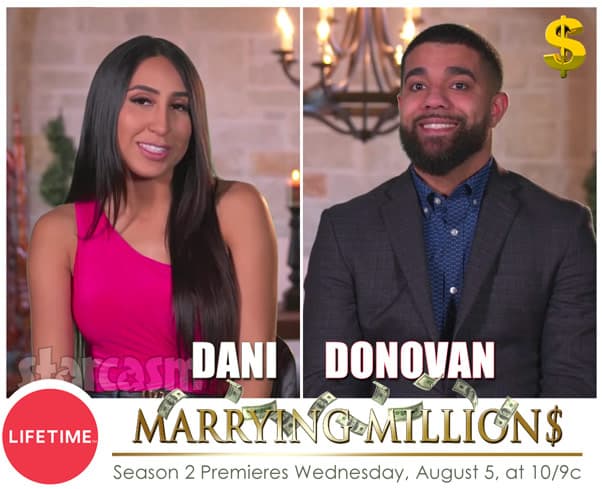 After a missed connection while attending the same high school, it was fate that brought these two back together down the line. From humble beginnings and raised by a single mother, Donovan now runs a highly successful multi-million dollar real estate company where he employs his girlfriend, Dani. Now that he has found success, he enjoys spoiling his girlfriend with lavish gifts and trips around the world. But issues simmer just below the surface, as Dani resents being a low-paid employee of Donovan. 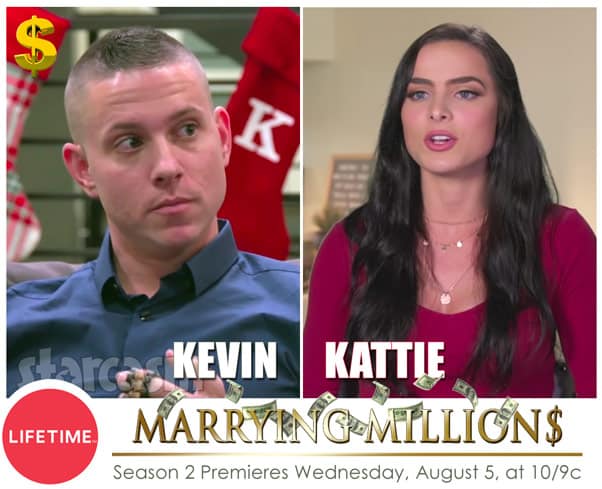 Kevin (30) is a self-made multi-millionaire who first met Kattie (23) when she traveled to one of Kevin’s speaking events in Mexico. Despite a net worth approaching $50M, Kevin is frugal with his money when it comes to spending on his girlfriend. This draws the ire of several of Kattie’s friends, who don’t understand why she is in a relationship with Kevin, despite her assurances that their love is pure. 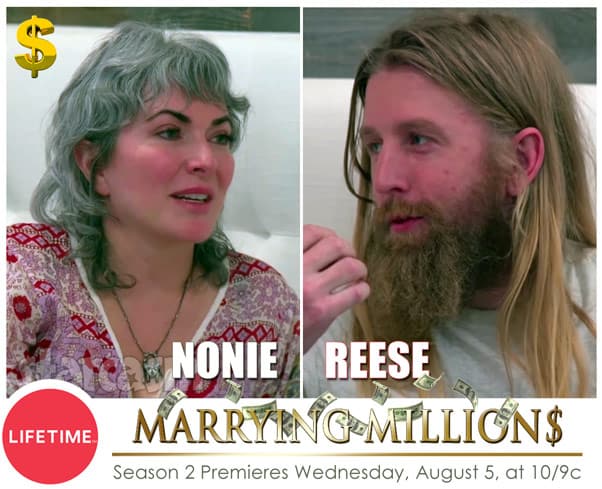 Nonie made a name for herself in the London fashion scene as a nail tech, working her way up to eventually launch several successful international beauty brands. She met her polar opposite, Reese, 17 years her junior, after swiping right on Tinder and the pair have been inseparable ever since. Nonie has a fierce work ethic which has led her to obtain properties in New York, London and Seattle. Reese, on the other hand, occasionally works as an arborist and lives at a skate house with several buddies. 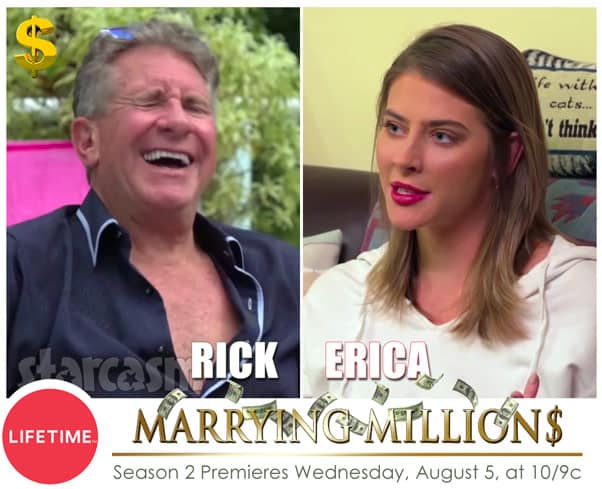 Erica is a 23-year old small town girl from Springfield, Illinois, while 68-year old Rick lives aboard his yacht in Miami Beach. The shock factor of their 45 year age gap hasn’t worn off on family and friends, including most notably Erica’s 5th degree black belt father, who doesn’t understand their relationship. Rick met Erica through social media, and after liking some of her photos, moved quickly to ask her to live with him on his yacht. 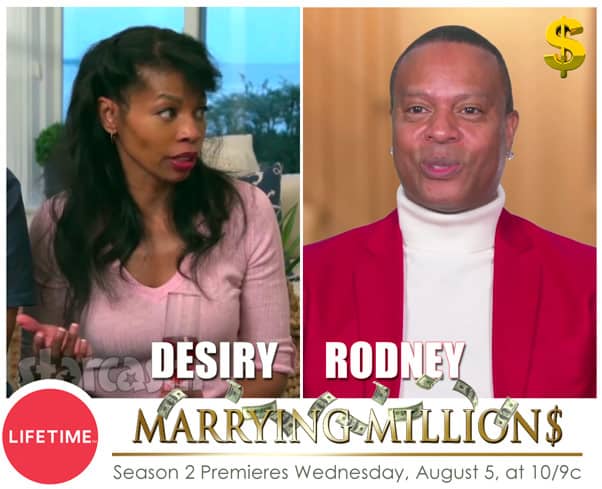 Multi-millionaire Rodney and his girlfriend Desiry are head over heels for each other, despite living separately on opposite coasts. Rodney made his fortune in the wine industry, which has given him the ability to take care of Desiry, who works for a non-profit. But with Rodney living outside Washington, DC, and Desiry residing in Los Angeles, their relationship has its share of challenges, including the fact that they have kept their relationship a secret. 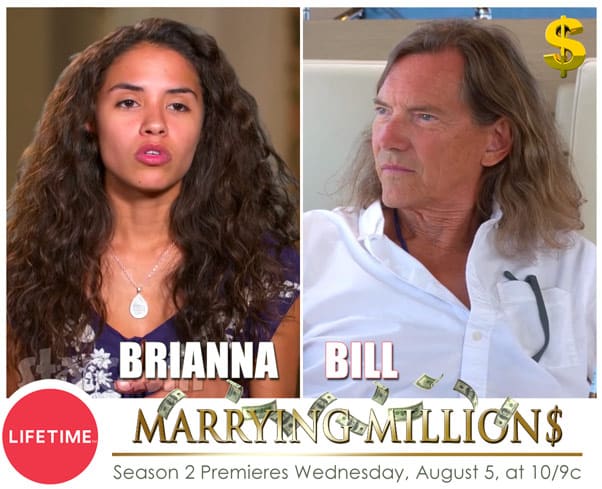 Bill, who describes himself as 61 years young, founded and currently runs a commercial real estate company with investments in the billions. Twice divorced, Bill met Brianna, 22, at a popular restaurant in Dallas where Brianna was a hostess and the two began dating. Despite an almost 40-year age gap, these two couldn’t be more in love with one another. Now that Brianna has become more accustomed to the tribulations of fitting in with Dallas high society, Bill must decide whether or not he’s finally ready to settle down and propose. 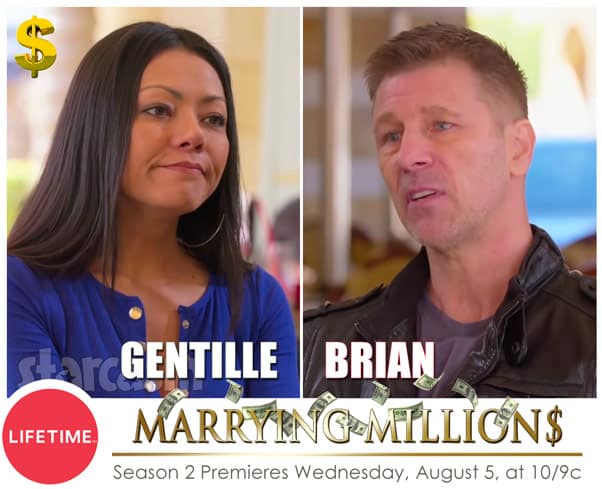 Gentille is a real estate investor who buys and sells extravagant homes, and in doing so, lives an extraordinarily lavish lifestyle. On the other hand, Brian works construction and lives at home with his parents. Much to Brian’s dismay, Gentille called off their engagement at the altar. Brian isn’t ready to let go yet and holds out hope that the pair can get back together, but the question remains whether or not Gentille is willing to rekindle things.

Marrying Millions Drew Gemma has multiple tax liens, plus other liens over the last 7 years