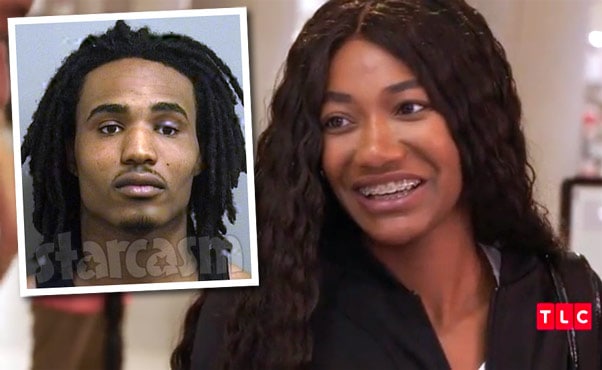 90 Day Fiance: The Other Way star Brittany Banks revealed on the show that she got married at a very young age, and just a few months later her husband was taken by ICE and eventually deported to Haiti. Unlike her current fiance Yazan, Brittany’s ex was living in the United States, and she says she had no idea that he wasn’t a US citizen.

My ex-husband was living in the United States his entire life. He came over from Haiti when he was three years old. I met him when I was 17 and we were in the same group of friends. We hung out all the time. He seemed like a really cool guy, and one day he asked me to be his girlfriend. After about three or four years of dating, we decide that it was time for us to get married. From our date of marriage, we were only together three or four months before he was deported.

As we previously reported, Brittany got married on March 30, 2015. That was four days after her 22nd birthday. So what happened that caused her husband to be deported?

WHY WAS BRITTANY’S HUSBAND DEPORTED?

After several arrests for relatively minor charges like driving without a license, marijuana possession, tampering with evidence, and running from police between 2011 and 2012, Brittany’s ex’s legal issues got much worse in 2014.

In January, he was riding with another man who was pulled over for speeding. During the stop, an officer observed Brittany’s ex attempt to hide a plastic baggie in the passenger side floorboard. The bag was later determined to contain 35.5 Xanax pills. There was also $1,850 in cash found in the car. He was charged with possession of a controlled substance.

Less than three months later, he was back in trouble again after he rear ended another driver then fled the scene. His car would later break down in an intersection and police arrived on the scene to find him standing beside the disabled vehicle. At one point, he was was observed by an officer on the scene “reaching into his waistband with his right arm.” An officer yelled at him to show his hands and he reportedly refused. The officers then “took down” Brittany’s ex, at which point they discovered two Ziploc bags. One of the bags contained 14.8 grams of meth. The other contained 7 Molly pills, 14 grams of Xanax pieces, and 1.4 grams of marijuana.

It’s unclear why he chose to keep drugs on his possession after being in a hit and run, then breaking down. Making matter worse, he presented officers with a fake I.D.

As a result of this arrest, he was charged with four drug charges, resisting an officer, fake ID, and providing a false name.

In May of 2014, he pleaded guilty to seven total charges, including three felonies.

Brittany’s ex was detained by ICE while on probation in August of 2014, and he was informed that deportation proceedings had been started against him.

On March 31, 2015, which was one day after Brittany and her ex were married, an immigration judge denied an application for a withholding of removal.

In June of 2015, his attorney filed a motion to set aside the guilty pleas claiming that his client was unaware that he wasn’t a US citizen, and thus he was unaware that his guilty pleas could result in his deportation. The motion includes details about how Brittany’s ex got in to the United States, and his explanation for not knowing he wasn’t a US citizen. Here is a brief recap:

All of his siblings are US citizens, and his dad and step-mom are US residents. He was repeatedly told by his step-mother that he was a US citizen and she had his social security card. He had several jobs, including a busboy, dishwasher, and landscaper, which he was paid under the table for.

His lawyer argued that his client would not have pleaded guilty to the charges if he had known he was not a US citizen.

The motion was eventually denied, in part because he could have legally been deported regardless of the guilty pleas.

DID BRITTANY & HER EX REALLY NOT KNOW?

Personally, I find it VERY hard to believe that Brittany’s ex was not aware of a potential issue with his US citizenship. As evidenced by his numerous arrests, he did not have a driver’s license or a state issued ID. Plus, his attorney reveals that he had multiple jobs in which he was paid under the table. At the time of his last arrest in 2014, he was 22 years old.

There is also a question about whether or not Brittany knew about his status when they were married. As mentioned above, they tied the knot one day before the immigration judge issued his ruling, so that does seem like an odd coincidence. Could that have been an ill-advised attempt to help keep him in the country?

3 new 90 Day Fiance spin-offs on Discovery+ streaming service, plus The Other Way Strikes Back