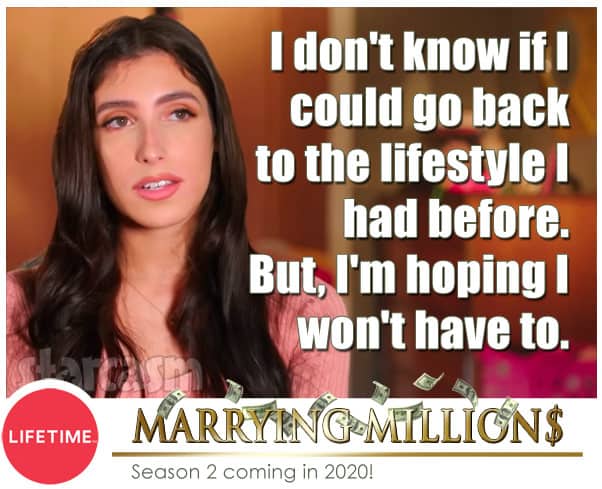 Lifetime has officially given a green light to Marrying Millions Season 2! They also announce they will be expanding the series from 10 episodes to 16!

From the network’s press release:

Lifetime has taken a vow to love, honor and cherish the freshman docuseries Marrying Millions with an expanded second season order. Returning in 2020, Marrying Millions receives a 16-episode order, up from 10 episodes from its debut season, as it follows relationships where one partner is incredibly wealthy, and the other is definitively not.

Gena McCarthy, Executive Vice President of Lifetime and head of their unscripted division, shared her reaction to the announcement. “We’re so excited to see Marrying Millions break through and are expanding the franchise to super-serve women hungry for strong, provocative relationship content,” she said.

Lifetime touted their new series by putting a spin on the ratings, emphasizing the female demographic and the big viewership bump for the season finale:

The season 1 finale of Marrying Millions on September 11 hit a season high with all key demos, delivering 433K with W25-54 in L3. Marrying Millions grew an additional +199k in its season finale within a 3-day window, marking the highest lift of the season. Season 1 of Marrying Millions averaged 331k W25-54, making it Lifetime’s strongest unscripted non-spinoff freshman season in over 3 and a half years in that demo as well as A25-54 and Total Viewers. Additionally, Marrying Millions and its lead in Married At First Sight, delivered 144% total demo growth for Wednesdays vs last year for the night.

Talking in terms of demographics can be a little deceptive, so I will break down the actual raw viewership numbers for you.

Marrying Millions Season 1 premiered with 459,000 viewers. The Premiere had a lot of buzz on social media, and the fact that it was produced by Sharp Entertainment (90 Day Fiance, Love After Lockup) seemed to motivate a lot of folks to tune in for Episode 2. The following week, the ratings saw a very large bump up to 602,000 viewers!

However, the buzz seemed to die down a bit after the second episode as ratings for Marrying Millions remained kind of flat leading up to the finale. Episodes 3 through 9 averaged 547,000 viewers, culminating in 581,000 tuning in for the episode just before the finale.

Just as Lifetime stated above, the finale saw a VERY large bump as 727,000 tuned in for all of the “wedding or no wedding” reveals! If network executives were on the fence about a potential Marrying Millions Season 2, then I’m sure the big finale ratings sealed the deal. 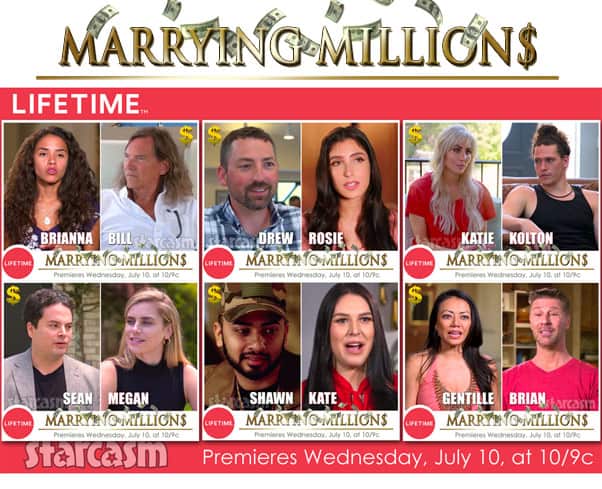 So, will there be any returning cast members for Marrying Millions Season 2? I can only assume that there will be. As many fans have pointed out in their reactions to the show on social media and online forums, the cast members seem to REALLY want to be on a reality show!

Katie Hamilton and Kolton Pierce recently appeared on The Domenick Nati Show and revealed that they have already been asked to return. “They approached both of us about it,” Katie said. “I would be down for at least exploring the option,” she added.

“Yeah, I think the same thing,” Kolton said. “They did want to know if we would be open to it.”

Which Season 1 couples do I think will be back for Marrying Millions Season 2? I would rank their chances in tiers. Katie and Kolton would be in the top tier, along with fan un-favorites Bill and Brianna. Both of their relationships were left kind of open-ended, and I can’t imagine either of them saying no.

So why would Lifetime have Bill and Brianna back if fans don’t like them? Because fans enjoy not liking them! These two are kind of the faces of the franchise at this point, at least in the world of social media chatter. (Just think in terms of 90 Day Fiance‘s Danielle and Mohamed.) Plus, Bill actually has a lot of money and can create scenarios that really promote the basic concept of the show, like buying a yacht or flying off to the Bahamas on a whim. 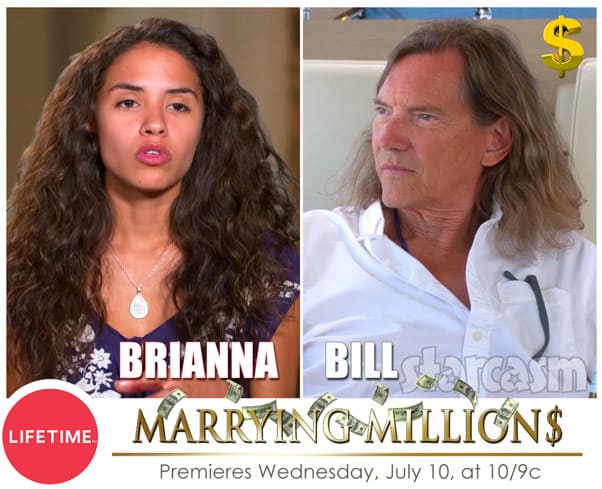 The second tier would included Drew and Rosie as well as Sean and Megan. These couples had fans feeling some kind of way as well, but I just don’t know if they were entertaining enough to merit a return invite.

The bottom tier would be Shawn and Kate. Not only did their story come across as clunky, but Shawn has appaeared on several reality shows and has been vocal about how much he did not like being on Marrying Millions.

You may notice that I have not mentioned Gentille and Brian. These two are no longer a couple, and I place them individually on opposite ends of the tiers. There’s no way Brian will be back. On the other hand, Gentille is basically besties with some of the Las Vegas production crew now, and I see her as an almost automatic for a return with another less wealthy feller.

Will it be 90 Day Fiance‘s Colt Johnson, who Gentille has been photographed with recently? I doubt it. Will her new relationship be heavily scripted and hard to believe like her relationship with Brian the actor? I do not doubt it. Will I enjoy watching it? I kinda like Gentille, so I confess the answer is probably “yeah.”

As a blogger, I really enjoyed the first season of Marrying Millions. But, as a fan, I was a little bit disappointed because they didn’t seem to have two or more really authentic (but still a mess) relationships. That seems to be the real recipe for success for Sharp, and I hope they are able to find lightning in a bottle for Marrying Millions Season 2!

My personal plea to producers: PLEASE, PLEASE, PLEASE don’t cast more “millionaires” who have been on reality TV before! Get out there and pound some virtual pavement and find some folks who might never have thought about applying to be on a reality show. Focus on the “Do you have any friends or know anyone who might be a good fit for Marrying Millions?” angle. There simple HAVE to been some eccentric millionaires out there dating people with a lot less money who would make for some GREAT reality television!

As mentioned in the Lifetime press release, Marrying Millions Season 2 is set to premiere some time in 2020. We will certainly keep our eyes and ears open and update when we know more about the premiere date and/or the cast! Stay tuned!

Marrying Millions Drew Gemma has multiple tax liens, plus other liens over the last 7 years