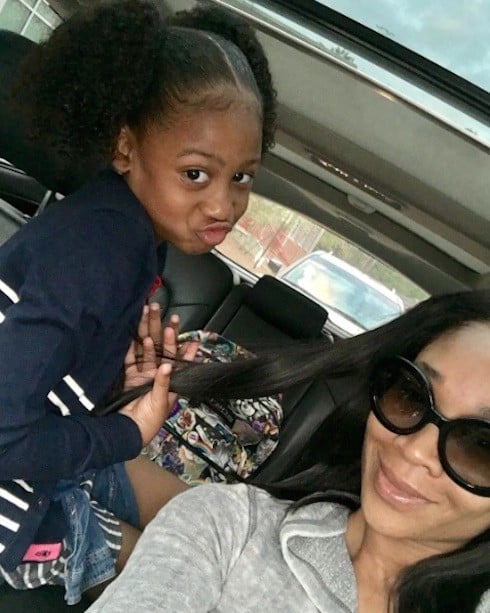 She may have just revealed baby Bonnie Bella to the whole world, but Joseline Hernandez is absolved of nothing in Mimi Faust’s eyes. The LHHATL star filed a petition for a restraining order against Joseline this week, on behalf of Eva, the seven-year-old daughter Mimi and Stevie J share.

According to Rodney Ho of the Atlanta Journal-Constitution, Mimi has been alarmed about Joseline’s proximity to Eva ever since, beginning late last year, she “noticed that Stevie…was softening his stance toward Joseline with the upcoming baby.” The report further pointed out that she warned Stevie she was thinking about a Mimi Faust restraining order on Eva’s behalf.

This week, Mimi “followed through” on her plan. She’s petitioned for a court order to keep Joseline at least 200 yards away from Eva at all times.

“I’m not angry,” Mimi said, in response to some of the social media backlash she’s faced since news of the petition went public. “I’m not jealous. People think this is a f*cking joke. This is for real. This is my real life. I don’t give a f*ck about the show or what was said on it. There are things I can’t even speak about on the show.”

Mimi pointed out that the “unfounded craziness” of Joseline accusing Stevie J of molesting Eva “led to child services coming to their home” and further convinced her that a restraining order was necessary. In addition to those accusations, Mimi’s petition notes that Joseline “attacked Mimi physically twice,” “threatened more violence multiple times,” and “used illegal drugs openly at [Joseline’s] residence.”

In sum, Mimi told the AJC “I don’t want my daughter around anyone of that nature.”

However, there’s no love lost between the two LHHATL cast members, and Mimi didn’t exactly stop there. She also called Joseline a “complete a$$hole” and said it’s “BS” that Bonnie Bella’s birth has changed Joseline’s character. (This is only a slight escalation from the child molestation fallout of last summer, when Mimi called Joseline “backstabbing trash.”)

Finally, Mimi said she has no problem with Eva being around Bonnie Bella, and wouldn’t object in the future if the two became friends–so long as Stevie figures out a way to bring the girls together without involving Joseline.

Joseline, who may be contemplating a switch to the upcoming Love & Hip Hop Miami, did not comment to the AJC, and has remained quiet on social media.

LHHATL Season 6 begins filming: Karlie Redd and Young Joc back together for the cameras