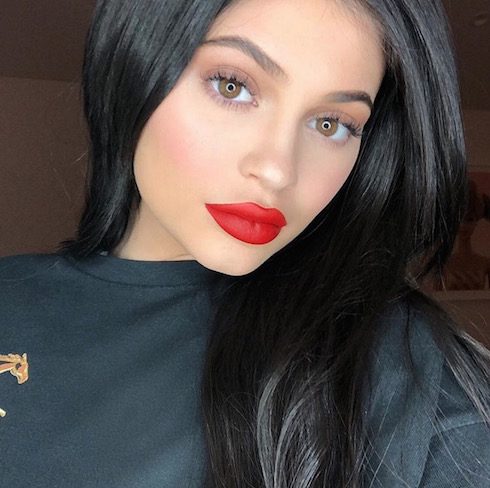 Kylie Jenner. who has yet to actually officially confirm that she’s really pregnant, decided to call further attention to her hidden baby bump by revealing a surprise cache of tasteful nude photos on social media. The Kylie Jenner nude pics were made available in full to fans who’ve downloaded her app, but Kylie also gave a preview to the public at large by uploading a two-fer to Instagram:

posted some exclusive polaroids on The Kylie Jenner Official App from the past few years..

Kylie’s allegedly disastrous baby shower took place two weeks ago, and her pregnancy was unofficially confirmed by both People and ET over two months ago. But the 20-year-old is said to be waiting for the high sign from momager Kris Jenner before confirming what’s become the worst-kept secret in entertainment. (It’s also worth pointing out that surveillance photos of Kylie’s baby shower revealed a pink theme, seemingly confirming the gender of her unborn child as well.)

As for the Kylie Jenner nude pics, the photo set also included never-before-seen snaps from Kylie’s recent photo shoots with Flaunt Magazine (for their May cover) and for Kylie’s assorted cosmetics ventures. “I was going through some old photos from the past few years,” she wrote on her app, “and found so many good Polaroids. I just had to share them exclusively with my app subscribers!”

In related baby news, Kylie is reportedly “begging” rumored baby daddy Travis Scott to move in with her when their child is born next year. Hollywood Life claims that Kylie is “desperate” for Travis’ companionship, and, per their anonymous source, is “pleading with Travis to move in with her full time and take a break from work once their baby arrives.

“She knows she will need help with late night changings and feedings so she is begging him to stay with her nightly,” the source, who appears to have forgotten that Kylie Jenner is rich enough to hire a different nanny for every hour of the day, continued. “She feels like it will be important for Travis to form a strong bond with his child so she won’t stop talking to him about moving in as soon as possible. She doesn’t want their baby raised by nannies, so she is asking him to be a hands-on father.”